This is the Problem with your NPR Tote Bag.

At the turn of the 20th century, sociologist Thorstein Veblen coined the term “conspicuous consumption” to explain how material objects are public displays of wealth or social status.

Luxury goods such as designer clothes and cars or expensive jewelry and watches, as well as luxury services like airplanes and boat cruises, were all used to flaunt power and prestige—whether real or not—and distinguish where you stood in the social hierarchy.

But today, things are a bit different. Yes, luxury goods are still part of today’s capitalist landscape, but they are more accessible than a century ago, giving them less weight regarding showcasing social capital. Yet, social divides are deeper today than ever before.

Why is that? On the surface, many of us might look the same. Most of us aren’t out flaunting $10,000 Hermès bags. Both the middle and upper class book flights and cruises, own iPhones and flat-screen TVs, and purchase expensive clothes. Yet, according to recent data in the United States, the country’s elites are spending significantly less of their income on material goods compared to the middle class, choosing to invest in immaterial products like health and education.

Today’s elites showcase their wealth in much more nuanced ways, by going to yoga, listening to NPR, reading The New York Times, shopping at farmers markets, and breastfeeding.

“You’re actually spending an awful lot of money to breastfeed your child because time is money today,” said Elizabeth Currid-Halkett on NPR the other day. “In a knowledge-driven economy where […] the flexibility of work life is a product often of education and well-paid jobs and good maternity leave and good health benefits, that’s expensive. And so that was the thing that really was interesting to me when I thought about how elites spend money today, is that they spend it to get time back—spending on gardeners and child care and housekeeping. That’s that’s what that is. That’s, ‘I don’t want to have to do this with my free time, and I have the money to not have to do it.’”

So there I was, driving an eco-friendly car with my yoga mat and organic groceries in the backseat, listening to NPR about how Elizabeth Currid-Halkett’s research into elite social groups applied specifically to me.

It was enlightening to hear her talk with Shankar Vedantam, host of the podcast “Hidden Brain,” about how the new elite—who she calls the “aspirational class”—spend their money on things that are more subtly exclusionary—what she dubs “inconspicuous consumption.” She explained how inconspicuous consumption is usually seen as good and for the good of society, such as education, fitness, and organic groceries. These financial choices, she argued, are driven by an aspiration to be a better human.

As I listened, I felt a sense of connection to this yoga-practicing, NPR-listening, organic-buying segment of people, yet guilty for doing the things that I thought were positive drivers in my own life and the lives of those around me.

I’ve been deliberately cultivating a more mindful life for a few years now. It specifically began when I took up a regular yoga practice and eventually became a certified yoga teacher. I was excited to become more aware of my sense of self and how my actions impact the people and the world around me. Since then, I’ve continued my socially-conscious journey by becoming vegetarian, paying for the news, and implementing other mindful aspects into my daily life.

In her book The Sum of Small Things: A Theory of the Aspirational Class, Currid-Halkett goes into detail about how the consumer habits of the new elite have evolved from overt materialism to more subtle spending that reveals status and knowledge—even without a high income. She mentions people with creative writing degrees from Yale, screenwriters who have yet to sell a screenplay, and Teach for America and Peace Corps fellows as examples of people who are still part of this new cultural and social elite despite not being in the same economic bracket according to their income.

That’s what got me thinking about how I’ve always been part of this “aspirational class.” I was raised by two career-focused parents and a revolving door of full-time nannies. My parents, a professor and an entrepreneur, didn’t always have the means to shower me with lavish gifts but chose instead to spend their money on non-materialistic and knowledge-based things such as education, music lessons, and travel.

I grew up with my dad tuning into NPR every chance he got—while cooking organic meals for dinner or driving my brother and me to private school. I lived in a foreign country as a child, where I learned not only a second language but also about a culture different from my own. And I was first exposed to the elements of Buddhism in college, which is where I continued my private education.

So to me, I’ve always taken for granted that I should eat healthily, exercise regularly, stay informed about the news, and generally strive to become a better human. In my bubble, knowledge and cultural capital—and their accompanying socially-conscious spending—were expected. And that’s the problem.

“You can see how privilege replicates itself,” argued Vedantam at the end of the podcast. “From the earliest days of someone’s life, they’re either breastfed or formula-fed. Maybe that one thing doesn’t make a big difference, but as they grow up, their parents are buying organic tomatoes or conventional tomatoes. They get signed up for piano classes, or they don’t. Their parents are able to save for their college education, or they’re not […] Each of these small decisions adds up. It creates a new social elite.”

And it deepens divides. Despite the well-wishing nature of this new elite, the mindset is inherently exclusionary. The lower and middle-class cannot afford to go to $20 yoga classes three times a week or spend $2.50 on an avocado. More poignantly, education—and specifically higher education—is so prohibitively costly, that saving up for it isn’t even an option. So instead, they generally gravitate toward conspicuous consumption.

The problem lies in that conspicuous spending is merely a means to an end, while inconspicuous spending contributes to a better quality of life and therefore improved social mobility, so it’s easy to see how the two perpetuate divides. However, that doesn’t mean it’s not worth fighting for.

The first way to break down these divides is by stepping outside of our social networks. We can volunteer at a shelter or mentor disadvantaged youth. We can get back in touch with that family member or friend whose opinions we disagree with and try to find some common ground.

We can also think about ways our line of work can be more inclusionary. As yoga teachers, we can teach a class at a community center or open up our studio for a free or donation-based class to allow people from different walks of life to explore meditation and movement—something that should be accessible to everyone but in today’s society usually isn’t.

And most of all, we can continue to think about how the little things add up. Sure, we like to poke fun at the kale lovers and yogis, but notice the message we’re implicitly putting out there with the things we spend our money on.

There’s no shame in inconspicuous consumption as long as we maintain the awareness that even though it might seem like a small thing, it’s a luxury many cannot afford.

So the next time you pick up your NPR tote bag on your way out to the farmers’ market, remember that while it might not be a $10,000 Hermès purse, it carries the same social capital as one. 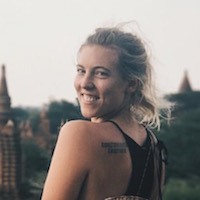