A Pinky Swear to all my Sisters: I’m Not after your Man. 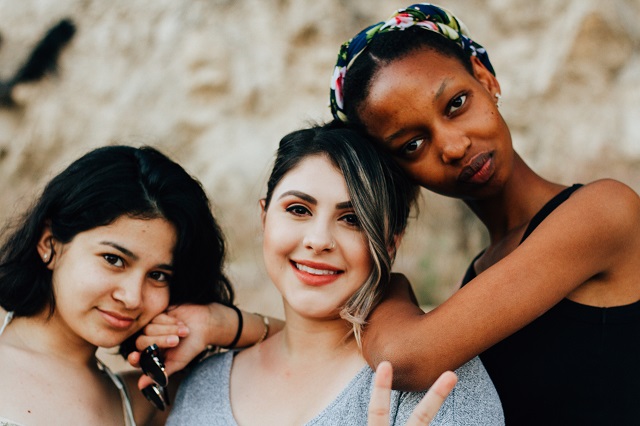 No girls allowed! No boys allowed!

I don’t know what transpired at my daughter’s pre-K that led her to come home spouting this nonsense.

We are an intersectional feminist household that promotes true gender equity over societal gender norms—and when I say we, I mean me and my two children. My children have never heard me make statements denigrating either gender, and I am not about to allow that mess through my front door.

It was a shock to me that misogyny starts as early as pre-K. I have a four-year-old who came home the first week of school talking about how pink is for girls and not boys. Says who?

In 1918, Ladies’ Home Journal explained that pink is a strong color, whereas blue is more dainty. A similar article appeared in Time magazine in 1927. It wasn’t until the 1940s that clothing manufacturers decided to change this around. Since then, we’ve accepted it and assume it’s always been that way. Before the early 1900s, children wore gender-neutral clothing, primarily in white for easy bleaching.

So, here we have a gender construct based entirely on the whims of the clothing industry and its advertisers. But we speak it like it’s truth. It’s the same idea that long hair is for girls and short hair is for boys. Clearly, we can see that throughout history this has not always been the case. But our children attend public school and quickly learn that these antiquated standards are still being taught like they are gospel truth rather than a marketing ploy. So, it’s up to us at home to do what we can to provide damage control.

That’s how misogyny works. It’s so insidious that it creeps into our lives in ways that we don’t even see as being initially harmful. But as we age, the double standards that come with gender become increasingly dangerous to both our sons and daughters as boys are taught to suppress their emotions and girls are taught that they are less than their male counterparts. And we can see it in how girls (and later, women) are taught to relate to one another.

Take any number of movies or books, and we can see how women are often pitted against each other as adversaries. Even watching Clifford, The Big Red Dog with my daughter, I can give multiple examples of this type of dynamic playing out. It’s unhealthy, and many women go the rest of their lives genuinely believing that other women are competitive, argumentative, and traitorous rather than supportive, loving, and loyal. They rob themselves of female companionship because they’ve been told time and again that other women aren’t to be trusted.

We need a girls’ code, a code for women where we stand up for one another. Take, for instance, the #MeToo and #TimesUp campaigns. As it gained momentum, women were using the hashtag #BelieveWomen in a show of solidarity for one another. That’s the kind of code I’m talking about. We should believe one another, support one another, and lift each other up. This life is not a competition.

I’m here to pinky swear that I am not ever after another woman’s man. If he hits me up on social media, I will not be flattered by his remarks on my appearance. I will not entertain a flirtation with someone who is in a relationship. I will not be complicit with my silence. I will call him out, and I will likely let his significant other know. I’ve done it before, and I will do it again, because this type of interaction is disrespectful to us (as the object of that person’s attention) and to their significant other (who should rightfully be receiving this attention). It’s a slap in the face to women everywhere, and so many women stand by for it. Or, worse, participate in it by knowingly deceiving the other woman.

I don’t care if we pinky swear or come up with a pledge, but women should have a code where we don’t ever do something to another woman that we wouldn’t want done to us. Sound familiar? That sort of Golden Rule repeats itself in nearly every form of spiritual practice. Why don’t we, as women, honor that for each other?

And I’m not just talking about relationships. We shouldn’t step over one another to climb a corporate ladder. We shouldn’t gossip about each other to make ourselves look good or to make someone else look bad. It’s not about who can break the glass ceiling first. Not at all. In fact, it’s more likely to get broken if there’s a team effort, and we shouldn’t just be trying to break it for women like us either.

It’s not okay to be all about feminism as long as it’s white feminism. We shouldn’t be leaving women of color behind so that we can get where we’re going faster. And that includes the LGBTQ+ community, including trans women. Our code should be as inclusive and intersectional as we strive to be, which may mean that white women like me have to shut up and sit down and listen to the experiences of other women so that we can better understand the complexities inherent in misogyny.

Then we need to go a step even beyond that and point out the men who are advocating feminism in their own life, who are putting in the work to smash the patriarchy too, because they realize that this is best for all of us. We need to say this is what a good man looks like, and we need more of them. We can teach our sons and our daughters how to identify strong people, and we do it by being strong ourselves. As I tell my daughter, everyone is allowed. And I hope that women everywhere can start stepping up for each other to make that statement a reality.