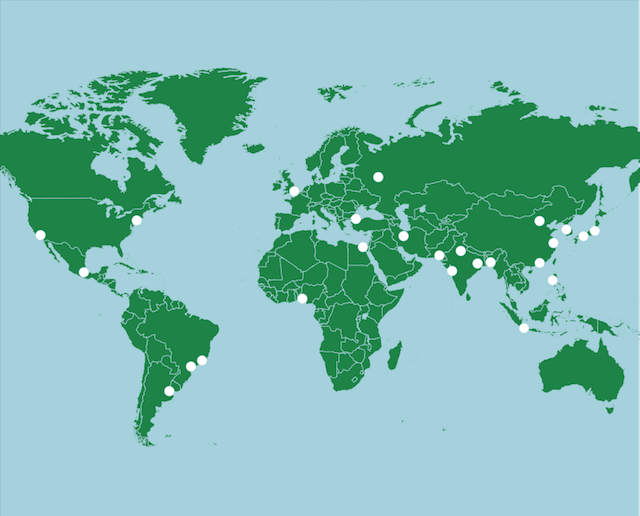 On Saturday, February 3 the World Premiere of the documentary film, “Ocean Cities: Exploring Our Connection to the Seas” took place at eTown Hall in Boulder, Colorado.

The film explores cities, their relationship to the ocean, and the challenges we confront as climate change leads to sea level rise. Prior to the screening of the film, I had a chance to sit down with Dr. Chuck Davis, M.D. over breakfast at a favorite local café in Boulder.

Dr. Davis is the producer and director of the film, along with Dr. Tim Beatley, the Teresa Heinz Professor of Sustainable Communities at the University of Virginia, School of Architecture. Apart from serving as a family practice physician in Boulder, Dr. Davis also serves inmates in the Boulder County jail system and practices Zen meditation when he’s not pursuing filmmaking as a hobby.

As the founder of his film company Throughline Productions, he seeks to make amateur documentaries to educate, move, and motivate from the heart. His work illustrates that you don’t have to be a major film producer to make an impact. It takes all of us doing whatever we can, whenever we can, to make the world a better place.

Dr. Davis explained that the film was inspired by Dr. Beatley’s book, Blue Urbanism: Exploring Connections Between Cities and Oceans. He emphasized, “I like working with Tim, so I tossed out the idea of making a film based on his book—but it’s Tim’s baby.”

In the book, Dr. Beatley argues: “Given all we’ve gained from the sea, city policies, plans, and daily urban life should acknowledge and support a healthy ocean environment.”

The film explores examples of how this is being done in various cities in the United States, Canada, and Europe. The central question that the film explores in this era of climate change and sea level rise is, “How can coastal cities around the world innovate and connect to the oceans they border?”

Of the world’s 15 largest cities, all but two are located on a coast. In Latin America, for example, nearly 70 percent of the region’s population now lives in cities, and 60 of the region’s largest 77 cities are located on the coast. The drivers of coastal and marine degradation are population growth, rapid development, and associated economic growth, which combine to produce large-scale environmental impacts on marine (and adjacent land) ecosystems.

Numerous communities dependent on the marine environment, and the cities located near coasts are suffering a loss of marine life, over-exploitation of fisheries, an increase in invasive species and pollution, coral reef degradation (watch Chasing Coral for more on this topic), and mangrove deforestation, along with increased sedimentation due to inland deforestation and intensive agriculture. These issues are now exacerbated by climate change. As the average global temperature rises, sea ice melts (watch Chasing Ice for more on this topic), which insidiously leads to a dangerous rise in sea levels that threatens cities near the coasts.

To make matters worse, in the 20th century alone, half of the world’s wetlands were destroyed, undermining a natural form of protection for coastal cities. In turn, nearly 60 percent of Earth’s coral reefs are now at risk.

Future economic development must be built on a foundation of sustainable resource use and environmental protection.

Many local economies depend on sustaining the current ecological balance, especially those built on industries like tourism, fishing, aquaculture, agriculture, and forestry. Improving the management and conservation of critical watersheds and coastal habitats provides a mechanism to integrate natural resource conservation with the development of sustainable economic opportunities.

“Ocean Cities” explores these issues further by organizing them into four themes:

This final theme focuses on various solutions to the challenges confronted, including everything from better urban design and land use, to renewable energy, to educating urbanites about the wonders of life.

The future of Earth’s oceans is clearly dependent on sustainable urban development that protects ocean life and the resources upon which we are dependent. This will require all of us to become actively engaged on these topics. One easy way to engage is by calling your congressperson, a local politician, or a business leader in your community and ask that they fund programs that support sustainable economic pursuits.

Another step that you can take, whether you live in a city on the coast, or inland, is to get involved by joining a local organization or group focused on ocean, marine, and coastal conservation. I checked out what kind of opportunities there are in Boulder and came across the Colorado Ocean Coalition. I contacted the founder, Vicki Nichols Goldstein, and arranged to have dinner with her to learn a bit more about their efforts.

Ms. Goldstein informed me she recently spearheaded the creation of an Inland Ocean Movement so that those who don’t live on the coasts can still engage the issues. There are currently nine chapters of the movement nationwide, but if there’s not one near you, you can create a new one in your own town or city by getting in touch with her at [email protected].

Ms. Goldstein also mentioned that she was able to see the premiere of Ocean Cities at eTown. Her eyes lit up when she started explaining how the Inland Ocean Movement could be an excellent way to further the goal of creating a human connection to the sea in our cities nationwide, which was one of the main themes covered at the beginning of Dr. Davis and Dr. Beatley’s film.

I wondered if there was a central authority or agenda that the chapters had to follow given the diverse range of issues that could be addressed. Ms. Goldstein made clear that “each chapter creates its own agenda to focus on whatever ocean-related issues are most important to their communities, and becomes a part of a distributed network without any central authority.” This is a savvy approach, as devolved governance can increase participation and engagement when folks have the ability to determine their goals.

Ms. Goldstein also mentioned that the best part is that; “the cost of starting a new chapter is only $200, which gives people access to materials to get the chapter started and the ability to use the logo and other materials, including those created for the purposes of marketing, education, and outreach.” Ultimately, the Inland Ocean Movement was created to “engage inland communities in land-to-sea stewardship and work with like-minded citizens to protect our oceans.”

Ultimately, it’s clear that we don’t have to live on the oceans to protect them.

And after speaking with Dr. Davis and Ms. Goldstein, it’s also clear that no matter how we choose to get involved, each of us should learn more about, and demand that corporations and governments focus on:

>> Addressing climate change, and supporting campaigns encouraging divestment in fossil fuel industries
>> Minimizing inequality and leading poverty reduction strategies in natural resource dependent coastal communities
>> Developing nested systems of governance that unite planning and decision-making at the local level to planning and decision-making at the scales of large marine ecosystems by funding innovative government programs like the Sea Grant College Program (disclosure: I led Sea Grant International between 2001 and 2007 for the National Oceanic and Atmospheric Administration, Office of International Activities)
>> Eliminating dams that affect the distribution of the quantity and quality of freshwater flows into coastal ecosystems, which nurture fishery breeding grounds
>> Encouraging ways to further humanity’s connection to the sea while supporting a new environmental ethic, one that considers the inherent value of all species and ecosystems on Earth
>> Supporting sustainable forms of fisheries through programs like “Catch-Shares” and low intensity aquaculture, such as shrimp farming without deforesting mangrove ecosystems that provide ecosystem services, such as natural protections to human communities when there are tropical storms or hurricanes
>> Protecting biodiversity by educating, conserving, and rehabilitating critically important habitats such as estuaries, coastal wetlands, and coral reefs and the species dependent on these habitats

By making sustained investments on these topics and promoting collaborative learning across cities and rural communities, we can begin to advance the attitudes and behaviors that support both the sustainable development and conservation of coastal and marine ecosystems.

Dr. Davis and Ms. Goldstein are two great examples of citizens who have taken the initiative to address ocean and coastal related issues outside of government and the private sector. As more people learn about the issues and make an effort to lead change, we can have more hope for our future.

As Mahatma Gandhi said, “Be the change you want to see in the world.”

The film, Ocean Cities, will be shown in Baltimore on March 20th and in New York City on May 8th. Further details related to the venues and times will soon be available via Throughline Productions. For further information on screenings of the film, Ocean Cities, or arranging a screening, get in touch with Dr. Davis.

Stay tuned on this topic as I’ll soon be reaching out to another Boulderite, Jeff Orlowski, about his most recent film, Chasing Coral, created by Exposure Labs. In the meantime, watch it on Netflix.