What not to call Someone in danger of committing a School Shooting. 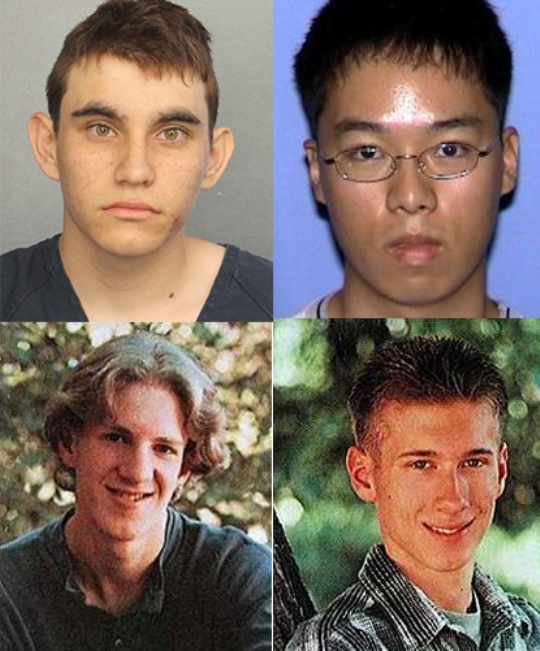 The issues of gun control and school shootings have been heavily conversed in the United States lately, so it shouldn’t be any surprise that Donald Trump weighed in with a number of tweets.

The one that I want to focus on right now, however, reads as follows: 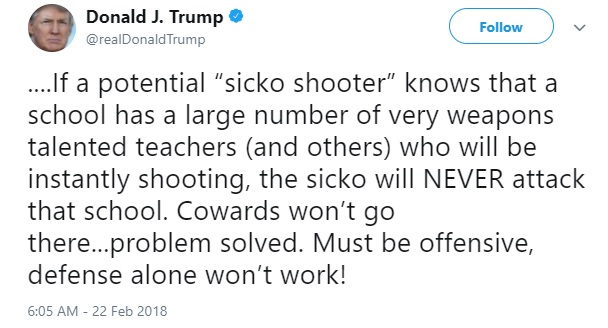 Now, there is a lot in this tweet that is concerning.

The very concept of teachers being forced to carry guns is terrifying, and I genuinely hope that never becomes a reality. But I think that this is the issue the majority of people who read this tweet will focus on, and it is the issue that will be discussed more prominently.

But there is something else in this tweet that I find terrifying, and worth a discussion.

Namely, I want to talk about Trump’s repeated reference to shooters as “sickos.”

Now, before I get into this, I want to clarify something: anyone who commits a shooting has committed a terrible, sick act. They have taken innocent lives out of this world, and a very strong argument can be made that that is unforgivable. I am not trying to defend their choice to murder people, because that choice is indefensible.

Now, the degree to which mental health is involved in gun violence is debatable. Only 14.8 percent of mass shooters in the United States are diagnosed as psychotic. People with mental illness contribute to roughly three to five percent of all violent crimes (most of which do not even involve guns), and when people with mental illness do use guns in a violent fashion, that violence is typically turned on themselves (in 2013, nearly two thirds of gun-related deaths were suicides). So when we say that “gun violence is a mental health problem,” we need to remember that mentally ill people are not one gun away from murdering a whole bunch of people.

But there is a video that has been circulating around social media in the wake of this discussion that I would love to draw your attention to:

This video is an open letter from Aaron Stark, and it bears the intriguing title, “I was almost a school shooter.”

In it, Stark talks about his experience in school, and how he had a “very chaotic and violent childhood.” He describes being bullied, and how, as a result, “I got angry, and I started hiding weapons everywhere.” He states that the only reason why he didn’t commit a shooting at his school was because he did not have access to a gun.

Mental health is not the only reason why gun violence happens. However, anyone who would be willing to take a human life is not a healthy person. These are people who are deeply pained, deeply rejected by their society, and, as Stark says, severely lacking in love.

These are the people who Trump is referring to as “sickos.”

And I’m not necessarily concerned for the men who have already committed shootings; that is an issue far too complicated for me to comment on. What I am concerned about is the young boy who is in pain, who is angry, and who is in need of support and love so that he can avoid doing the terrible thing that he has been considering. These are the people who are further alienated by their own president, who dismisses them as a potential sickos.

The language that we use when referring to people matters.

And “sicko” is a very dismissive word. “Sicko” does not create room for discussion, yet discussion is absolutely necessary for any young person who is considering this. “Sicko” does not create room for love, yet love is vital in avoiding this exact problem. “Sicko” is the sort of word that discourages a young man from coming forward and talking about his feelings, because he doesn’t want to be dismissed as a “sicko.” So he doesn’t come forward. He just sits with it and lets it fester. He allows it to progress until the absolute unthinkable happens.

The truth is, it does not take a monster to do this sort of thing. All it takes is one lost, hurting, loveless child.

It bothers me to see the leader of a country use this sort of terminology because it gives the rest of us an excuse to follow his lead. And we cannot do this. We cannot think in dismissive terms when it comes to other human beings. We cannot allow our horror of what might be to further doom other children who have not done it yet.

Creating stricter gun laws will take guns out of angry children’s hands, which will make it much harder for them to kill each other in such great numbers. But it will not make children stop feeling this way. This anger, pain, and loneliness is not alright, and it leads to so many other problems—more than just school shootings. This is the exact same feeling that so often results in bullying and suicides too.

If you are a parent, a teacher, an aunt, an uncle, or anyone at all who is in a child’s life, it is important that you educate yourself on the symptoms of depression, and look for them in your child.

If you notice any of these symptoms, or if you are given any reason to believe that your child might want to harm themselves or others, then you need to open up that line of communication with them. They might not want to talk to you about it—they might feel ashamed or afraid—but even just knowing that you’re there if they need you will help. Something as small as offering an ear, or a hug, or a smile can make a huge difference in a child’s life. This kind of positive relationship gives them something to lose when previously, there might have been nothing.

And it can be very easy to be horrified whenever a child expresses a fixation on violence, but it is important that we’re careful about how we express this horror. We need to remember where this fixation comes from, and we need to focus on that. I don’t know how many of us can relate to this fixation on violence that many young shooters have, but I know that many of us can understand feeling depressed, out of control, and like we have nothing to lose or hold onto. I know that I understand that feeling.

So, yes, the possibility that a child might hurt someone is a horrifying one, but it is, first and foremost, a human response to a lack of love and trauma. And we need to remember that. We need to meet them on common ground. We need to relate to them and love them and listen to them.

Because if we dismiss them as “sickos,” if we act disgusted and horrified with them, then we only push them toward the very thing that we are afraid they will do.