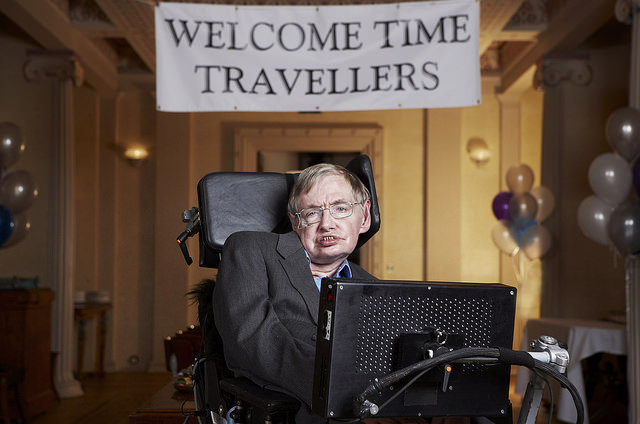 “Look up at the stars and not down at your feet. Try to make sense of what you see, and wonder about what makes the universe exist. Be curious.” ~ Stephen Hawking

Remarkably, Hawking was born on January 8th, 1942, exactly 300 years after the death of Galileo, and died on Albert Einstein’s birthday and Pi Day, which is an annual celebration of the mathematical constant and one of the more exciting days of the year for mathematics. It would seem apparent to many that Hawking’s existence here on planet Earth was written in the stars!

Following his motor neuron diagnosis—ALS, or Lou Gehrig’s disease—at 21 years of age, Hawking was told he might not live to see his 25th birthday, as sadly, those with ALS usually die within five years of diagnosis. However, he defied all odds and miraculously continued to live for another 51 years, enriching the lives of millions with his intelligence, wisdom, and knowledge, and revolutionizing the world of physics.

“My expectations were reduced to zero when I was 21. Everything since then has been a bonus.”

Hawking credited his long life to working in a field that he loves, explaining to The New York Times the joy of scientific discovery: “I wouldn’t compare it to sex, but it lasts longer,” and adding, “I am lucky to be working in theoretical physics, one of the few areas in which disability is not a serious handicap.”

In 1976, Stephen Hawking and George Ellis published The Large Scale Structure of Space-Time on the theoretical physics of space-time. Their joint work revolutionized our thinking about the universe. The two great thinkers explained how they discovered that black holes were not completely black but could leak radiation, eventually explode, and then disappear.

The paper examined the nature of infinite expansion of space and also studied the consequences of Albert Einstein’s 1914 paper on the general theory of relativity. Hawking’s and Ellis’s writing aimed to help pioneer our understanding of the universe.

“My goal is simple. It is a complete understanding of the universe, why it is as it is and why it exists at all.” ~ Stephen Hawking

Hawking’s book, A Brief History of Time: From Big Bang to Black Holes, was an instant hit and has sold over 10 million copies, remaining a best seller for more than four years.

Although we have lost one of the greatest, most admired, and beloved thinkers of the 21st century, he will continue to inspire generations for centuries to come with his uncovering of “The Theory of Everything.”

“Work gives you meaning and purpose and life is empty without it.” ~ Stephen Hawking

Hawking was undoubtedly a genius who was intent on discovering how and why the universe was created, how it works, and how and why it exists. His curiosity never rested, and it is for certain that the legacy of work he blessed us with will live on for eternity; his brilliance, courage, determination, and teachings will never be forgotten.

“Science is not only a disciple of reason but, also, one of romance and passion.” ~ Stephen Hawking

It is incredible to think this pioneer, who devoted his life to to physics and the intense study of the stars, is likely now travelling among them, finding all the answers to everything he spent decades passionately observing and researching.

Hawking may now know if one of his many infamous quotes is actually true: “I regard the afterlife to be a fairy story for people that are afraid of the dark.”

“His theories unlocked the universe of possibilities that we & the world are exploring. […] May you keep flying like superman in microgravity.”  ~ NASA

Seven quotes from Stephen Hawking to leave you feeling inspired:

“Quiet people have the loudest minds.”

“I believe alien life is quite common in the universe, although intelligent life is less so. Some say it has yet to appear on planet Earth.”

“While physics and mathematics may tell us how the universe began, they are not much use in predicting human behavior because there are far too many equations to solve. I’m no better than anyone else at understanding what makes people tick, particularly women.”

“We are just an advanced breed of monkeys on a minor planet of a very average star. But we can understand the universe. That makes us something very special.”

“Although I cannot move and I have to speak through a computer, in my mind I am free.”

“However bad life may seem, there is always something you can do, and succeed at. While there’s life, there is hope.”

“I have always tried to overcome the limitations of my condition and lead as full a life as possible. I have traveled the world, from the Antarctic to zero gravity. Perhaps one day I will go into space.”

5 Mindful Things to do Each Morning.