“Celebrity Yoga Teachers are a Disease.”

MC Yogi is a pioneer in the genre of conscious hip-hop, electronic, and reggae music.

When I heard that the famed musician and yogi was performing at Shakti Fest, where I was volunteering, I circled his Sunday morning flow as a must-do on my marked up schedule.

The San Francisco-born rapper began practicing yoga at age 17, while at a group home for at-risk youth, later traveling to India to dive deeper into yogic philosophy and spirituality. He is known for bringing ancient teachings back to large, mainstream audiences in the West through creative, high-energy performances.

His vinyasa flow was among many workshops and classes led by high-profile teachers and kirtan artists performing at the four-day festival in Joshua Tree. People had flown in from all over the world to see their beloved teachers and immerse in a conscious weekend of sharing, learning, and creating with thousands of other seekers.

The crowd waited for MC Yogi to arrive onstage for his 9:30 a.m. flow, buzzing with excitement. The sun was beating down on the desert venue and there was tangible energy ready to be expelled.

When MC Yogi appeared, he was dressed in ripped jeans, a plain T-shirt, trendy glasses, and a flat-brimmed hat, smiling and ready to get to work. Before we began, he had a strong and surprising message to share:

“Celebrity yoga teachers are a disease—what matters most is your own self-practice.”

He went on to explain yoga as just one means of many used to cultivate a deeper relationship with the authentic self. The ultimate goal of yoga, like service and other forms of meditation, is to help us ditch the rigid and limiting mind/body complex, wherein we wrongfully associate our sense of self with our ever-changing physical form and monkey brain. Most people in our world are living in this fictitious paradigm—afraid of death and distant from the present—due to a false identification with what it is they truly are.

We use asana and movement to quiet the mind, become curious about the body, and tap into a deeper state of tranquility—the quiet joy of living in the heart.

At that moment, MC Yogi fully embodied the yogic philosophy. This teacher was not on a power trip with any intention other than experiencing the magic and beauty of yoga with others, who happened to be facing him on stage at Shakti Fest. When yoga becomes a transaction and “fame” is thrown into the mix, so many of the principles of the practice deteriorate, and movement becomes a tool not to rid us of the mind/body complex, but to strengthen it.

Of course, most yoga teachers live in a society driven by capitalism and deserve to be compensated for their work. Yet we must be extremely careful how we pursue a “profession” out of yoga; we need to be sensitive to the fact that some seekers are quick to submit to a guru or celebrity teacher, often at the expense of their own personal journey.

Social media hasn’t made this any easier. As yoga teachers, we’re conditioned to think that the only way we can “make it” is to blast our followers with news of new classes, events, and retreats. How many of us have emerged out of a blissful savasana only to be mildly disturbed by a storm of updates about promotions and signs ups and teacher trainings? It’s become the norm for modern yogis to post pictures of themselves in challenging poses, flushed with an inspiring quote caption or at least something with more depth than a pun or emoji. And that’s okay—sometimes.

But we must be honest and true as to where we’re meeting ourselves in our practice, and how we’re sharing it with the world. If our relationship with our self-practice doesn’t come first, then yoga is far from offering us the self-empowerment and alignment that it has the potential to.

When we marvel over mastering certain poses, with consuming the perfect experience with a famous teacher, or amazing live music, or a creative sequence that impresses others, it takes away from the simple practice of yoga as a link between breath and movement—end of story. We begin seeking the next best thing, forgetting that the point of yoga is to redirect us inward to a place where we need no external stimulus, where we are unmotivated by materialism and unattached to desires of the body and the mind.

MC Yogi’s class was full of laughter, as he wove in stories of Hindu gods and goddesses, urged us to make friends with our neighbors, and led a fast-paced, energetic vinyasa. Later in the day, I reflected back on his words and realized that I was guilty of subscribing to “celebrity yogis.” It’s not to say that we can’t honor and celebrate those with gifts. The truth is that there are many gurus and masters with a wealth of knowledge that we can benefit from; but we must not be so eager to submit to a school of yoga, or a particular teacher, or believe that signing up for a training or workshop will do the rigorous self-work required from a modern-day yogi.

We must study hard and integrate what we learn into our daily practice. Whether we want to share it or not, in a mindful way, is another story. And yes, we can have fun in the process.

We must live moment by moment, pushing deeper into the heart, further into the present. The most knowledgeable teacher is always with us, and will never ask for a payment. The fact that this teacher isn’t present on our newsfeeds can often lead us to forget that the self is the most important master to cultivate a relationship with.

To become a true, practiced yogi, we must recognize, and revere, the guru facing us in the mirror as the most powerful of them all. 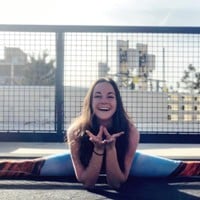