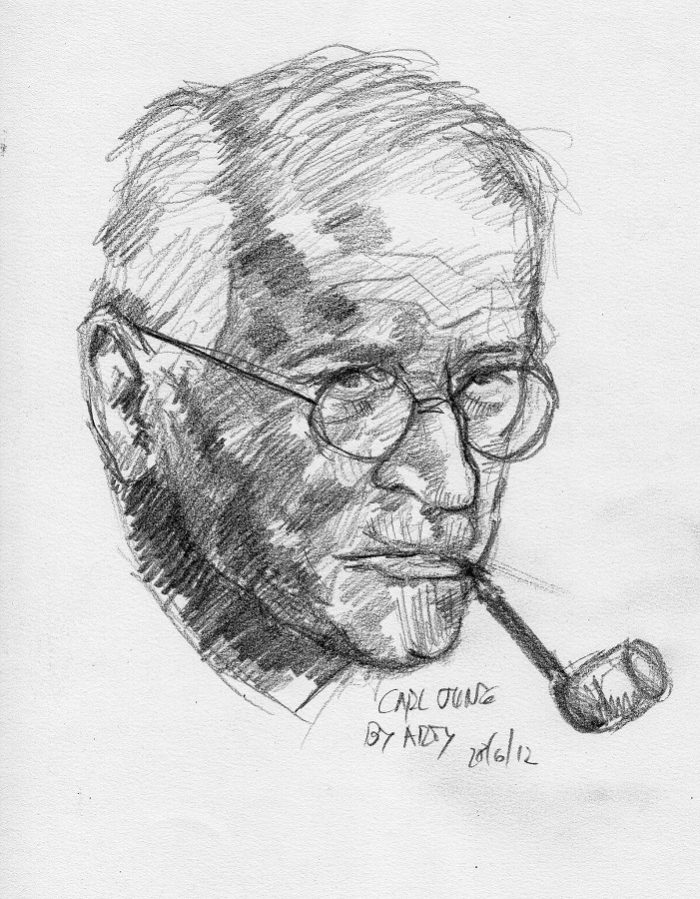 Carl Jung was a true genius.

Through his life’s work, Jung gave voice to what we all feel in our heart to be true—but could never say ourselves.

After becoming one of the original founders of psychotherapy, he went to study the underlying symbolism of the human story, unearthing the archetypal structure of our perception. We learn through stories—and some stories have repeated themselves again and again over time. He was the really the first one to identify that our stories have intrinsic meaning, and the more in alignment we are with the collective human story, the better we’ll be able to manage our daily lives.

There’s really too much to say about this man’s contributions to the world, so I’ll let Jung say it himself and I’ll sit idly by to transcribe.

“The doctor must consistently try to meet his own therapeutic demands if he wishes to assure himself of a proper influence on the patient. All of these guiding principles in therapy confront the doctor with important ethical duties which can be summed up in the single rule: be the man through whom you wish to influence others.”

As to say, we cannot have an impact on someone by sheer advice. We must act out that advice and be a walking example of how to be in the world. Words are fleeting. Live by example.

“All works of man have their origin in creative fantasy. What right do we have to depreciate the imagination? The creative activity of the imagination frees man from his bondage to the ‘nothing but’ and liberates in him the spirit of play. Man is completely human only when he is playing.”

As to say, everything human beings have created in the world is a result of our imagination. It’s difficult to separate fantasy from genius. When we are in the state of creative play, we are operating at the highest frequency. Fantasy doesn’t come from nowhere, it’s grounded in the collective human imagination. The imagination can be a deeply meaningful wellspring of free-flowing ideas, and what we’ve accomplished as a species is a testament to that fact. Creativity is the expression of our soul.

On mind and body.

“The distinction between mind and body is an artificial dichotomy, a discrimination which is unquestionably based far more on the peculiarity of intellectual understanding than on the nature of things.”

In other words, the mind is the body and the body is the mind. The only reason we see them as being separate is because of how we are conditioned to perceive them. We think that our consciousness is located somewhere behind our face and that the body is mostly an inconvenience that we drag around. No. Our body is our consciousness, and our mind is our body. It’s all interconnected, and it’s valuable to notice the intermingling of mind and body to have a better understanding of ourselves and the world at large.

“The parental complex is therefore nothing but the first manifestation of a clash between reality and the individual’s constitutional inability to meet the requirements it demands of him. The first form of a complex cannot be other than a parental complex, because the parents are the first reality with which the child comes into conflict.”

As to say, early childhood is such a major theme in psychology because it’s the first essential conflict with reality that we have, as opposed to there being something inherently dark and ominous about parenthood. Early childhood is the root of much of our conflict because that’s where it literally began.

“Whoever protects himself against what is new and strange and thereby regresses into the past, falls into the same neurotic condition as the man who identifies himself with the new and runs away from the past. The only difference is that one has estranged himself from the past, and the other from the future.”

In other words, running away into the future is no different from running back into the past. Both the past and the future are not now, so descending into either place is a form of escape from our present experience. When we pathologically resist the present moment, we perpetuate negative patterns of mind and create suffering. There are two ways of resisting life, dwelling on the past and projecting oneself into the future—and neither option is desirable.

“The serious problems in life, however, are never fully solved. If it should for once appear that they are, this is a sign that something has been lost. The meaning and design of a problem seem not to lie in its solution, but in our working at it incessantly.”

We’ll never solve all of life’s problems. Sorry to break the news. It is the active capacity to solve problems that we should be interested in, not the dissolution of all problems. Being human means having problems. We’ll never be free of them, but we can get much better at overcoming the problems we face. That’s how life is.

“It is true that widely accepted ideas are never the personal property of their so-called author; on the contrary, he is the bond servant of his ideas. Impressive ideas which are hailed as truths have something peculiar about themselves. Although they come into being at definite time, they are and have always been timeless; they arise from that realm of procreative, psychic life out of which the ephemeral mind of the single human being grows like a plant that blossoms, bears fruit and seed, then withers and dies. Ideas spring from a source that is not contained within one man’s personal life. We do not create them; they create us.”

Wow. That’s a good one to wrap it up. People don’t have ideas. Ideas have people. We don’t own our creative thoughts, because they come from a much deeper place. This is what Carl Jung was all about: acknowledging the deeper dimensions of human consciousness that are universal to all of us.

There’s something much deeper going on than what meets the eye, and Jung tapped into that deeper “goings on.” We have a hard time getting past our egos and not taking ownership of everything, and he cuts right through that like a hot knife through butter, baby. We don’t own the psychic fountain of creative activity—in fact it looks more like it owns us. The idea manifests through us, like we’re just a carrier. We are a vehicle of higher consciousness, not the other way around. Get used to it.

(All quotes from Modern Man in Search of a Soul.)

5 Qualities of the truly Modern Person, via Carl Jung. The Deeper Meaning of Dreams, According to Carl Jung. Carl Jung & the Practice of Meditation.