The Next time you Tell me to “Act Like a Girl.”

As I walked to get a cab to go to my class, a lady in her late 40s stopped me and said, “Grow your hair back. Girls should have long hair. Trust me, I know what I am saying. Grow it back.” Before I could even say a word, she walked away.

I sat in the taxi thinking about what this lady just said. Of course, my blood was boiling and all I wanted to tell her was to f*ck off, but this was not what really bothered me.

Fast forward to one month before that incident, I had shaved my head and donated my hair to cancer patients. This is just to tell you how short my hair was when that lady decided to give me a lesson on how long women’s hair should be.

Regardless of my motives and intentions to shave my hair, I found it disturbing how our society sets the rules for what women should or shouldn’t do, wear, or even look like. This also applies to men. And by saying society, I don’t only mean strangers you meet on the street, but also communities and close circles—even our families.

My four-year-old niece’s first reaction to my shaved head broke my heart. She wouldn’t talk to me. But hey—that is understandable. Little kids find it hard to adapt to change, especially looks. But that wasn’t all. She told me that I wasn’t a girl anymore and that I was un garçon, a boy. “Khalto, tu es un garçon!”

I had to explain that even if I had short hair, I was still a girl. To feel reassured, she had to touch my chest to make sure that the other signs of womanhood were still there.

I gave her some time to absorb this lesson, then I sat next to her and I showed her pictures of kids who have lost their hair due to chemical treatment. “Do you see these beautiful kids? These kids got a bit sick and lost their hair so that they can recover faster. I am giving them my hair to recover even faster.” She looked at the pictures, trying to imitate their poses. She asked a couple of questions and then totally accepted me. She bought it.

From the time they’re young, we start feeding our kids ideas and stereotypes on how girls or boys should behave and look. This is probably why I didn’t say a word to that lady who made a comment about my hair. She was taught that for a woman to be accepted and considered beautiful, she must have long hair. End of story.

I am not sharing this story to teach people how to respect others. But what if the lady had said that comment to someone who was going through chemotherapy? How would both of these women have felt in that moment?

My purpose is to shed light on how society puts so much pressure on individuals to look or act in a certain way, just because it’s how women and men “should” look or act.

We put so much pressure on men to “act like a man” that some of them (not to generalize) have become cold or irresponsible. Eventually, we blame them for being and acting in that way.

If a man shows affection or expresses his feelings, he is easily called “a p*ssy.” Just because he is a man, he must be physically strong, fast, muscled, loud, and a good driver. Otherwise, he is insulted and told that he’s acting “like a girl”—as if girls, by nature, are weaker.

I am not trying to teach anyone a lesson on feminism, although I am sure many people out there need a lesson or two. For those who think feminism is about females taking over the world and threatening the very existence of men, I would like to put their concerns to rest. Your sex is not endangered. Men are here to stay, relax. No one will replace you. You are very dear to us, or me at least.

Feminism is about pushing back against stereotypes of what women can or cannot do. It also doesn’t mean that if a man takes a woman out, he must pay the bill, just because he is a man. I mean, I wouldn’t mind a treat every now and then, but that doesn’t mean that just because I am a woman, he must take care of the bill, every time. I don’t mind treating my man with a nice dinner and taking care of the bill, either. And that applies to friends as well. It is not girls versus boys behavior.

What I’m saying here is that just because I am a woman, I should not be the one who cleans the house and makes the beds, every morning. Because I am a woman doesn’t mean that I can’t be a good driver or ride a motorcycle like a badass.

Just because I am a woman doesn’t mean that I have to have long hair and run to the hairdresser for a makeover after the first grey hair appears. And just because a man has long hair, doesn’t mean he is less of a man.

Just because I am a woman doesn’t mean that I can’t run or play football or be good at basketball or boxing. And, if a man isn’t gifted with muscles, please do not insult him by saying, “You hit like a girl.”

Similarly, just because he is a man doesn’t mean he is the only one who should work his ass off and have three different jobs to buy a house for the family. But also, if a man goes to work and runs errands and goes back home and makes dinner for his family, I wonder why no one ever calls him “strong like a woman.”

So the next time you tell me, “you’re a girl so act like one” (unless you’ve found an instruction manual to my vagina), don’t expect me to smile and say something nice to you—whether you are a man or a woman. 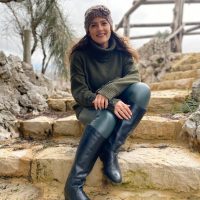 Françoise Freifer is 34, Lebanese, and lives in Doha, Qatar. She has a Masters Degree in translation. She finds joy in traveling, eating yummy food, and hanging out with frie… Read full bio