A Past Full of Cancer & a Future of Uncertainty: how Yoga helped me Begin Again. 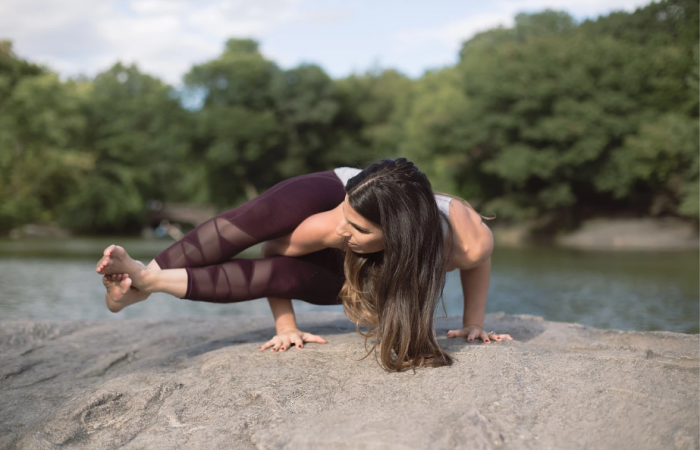 Around this time last year, a few weeks after celebrating Rosh Hashanah—the Jewish New Year—I posted a photo of myself on Instagram balancing on my palms, one leg crossed over the other in a number four shape, and captioned it: “New Year, New Side Hustle.”

This was my public announcement that I had graduated yoga teacher training and was ready to begin offering yoga classes to supplement my other job as a painter. In addition to providing my post’s caption with some catchy parallelism to attract new business, I felt that there was something appropriate about diving into this venture at the start of the Jewish year for a reason less obvious than the thematic pairing of new beginnings.

Six Rosh Hashanahs ago, my husband Ben and I had just discovered the original tumor in his testicle that would thrust us into a painful year of cancer treatments. Twenty-five years old, I spent the year of his illness shuffling around the various ominous spaces of hospitals. That year, the feeling that there was something to do—pick up prescriptions from the pharmacy, chase after second and sometimes third opinions, hunt for the one food Ben could tolerate during chemo, and then run home to walk our dog in between it all—never seemed to dissipate.

And I didn’t realize how comfortably distracting all of that was until Ben’s last treatment cycle finished. Once we had no further daily confrontations with the disease, I had a moment to finally face my crippling anxiety, which, oddly enough, manifested in a surprising physical symptom: the urge to pee. Constantly.

Convinced that I had myself developed some medical condition, I went to several of my own doctors’ appointments only to be told that the problem resided in my emotional world and not my bladder. On my doctor’s recommendation, I took my first yoga class, and instantly found in the asana practice, the physical postures of yoga, the most precisely right medicine.

Previously a person who only owned Lulu Lemon leggings for what they offered me aesthetically as an alternative to sweatpants, I became immediately addicted to yoga. Within weeks of regular practice, my relentless bladder relaxed, and I eventually recognized why. Yoga classes provided me with an outlet through which I could meaningfully and intentionally channel that urge to do something—the very urge that distracted me from completely absorbing a harsh reality and which turned strangely into the excuse of walking to the bathroom multiple times in an hour in order to physically occupy myself.

Unlike other athletic pursuits, yoga poses required the most detailed attention of every part of me. If I didn’t spread my fingers enough, direct my gaze just past my thumbs, draw my heels to my seat, and breathe steadily, I would never learn to balance in a Crow pose. And every posture, even what looked like simply standing upright, came with this number of specific cues. The amount of focus this required temporarily faded my world beyond my 24-square-foot mat.

Consciously directing awareness to my entire body in this way, for the first time in my life, offered me existence in the present, exactly what my yoga teachers emphatically encouraged at the start of classes. Recognizing the here and now, at least for the duration of class, liberated me from the past, a place of painful memories, and the future, a place marked by the anticipated dread of a bad prognosis.

And, ultimately, in the process of daring myself to attempt seemingly impossible shapes and balances, yoga restored my faith in the body. Having watched my husband temporarily transform from the picture of youthful health into that of fragility, I needed this proof that bodies could be powerful and resilient, that they could become strengthened by challenges instead of withering in the face of them.

At that unique moment, immersing myself in yoga changed everything and eventually led me to become an instructor. I have spent the last year since that Instagram announcement fervently sharing yoga with people whose minds and bodies often express emotional pain in peculiar ways, like mine did, and directing people to treat the very human desire to get out of one’s head—sometimes by learning to stand on it. Although I know that not everyone comes to yoga classes bringing quite the level of intensity with which I would have identified in the earlier years of my practice, I like to think that my authentic understanding of that possibility makes me a more responsible teacher.

This year, Ben and I are six years, one lost ball, two children, and my one new job away from the initial news of his illness. Because each Rosh Hashanah, like any New Year’s celebration, naturally functions as a bookmark for different life chapters, I often spend my time in synagogue reflecting on the changing circumstances of passing years. This holiday, I felt unmistakable gratitude for the sense that things feel so remarkably normal now—that, in between the blasts of the ram’s horn blown during services on the High Holidays, I was wiping my son’s stray pretzel crumbs from the velvet seat cushion underneath me—the very same cushion that was, not so long ago, a receptacle for my tear-filled tissues.

No doubt, time itself, as well as the distraction of new, consuming life phases, like motherhood, affected change. But I don’t underestimate how much yoga plays a role, too. It feels invigorating to have started this year feeling less engulfed by a desperation to heal myself and strong enough, instead, to give a little of what helped fix me to others. 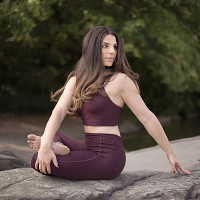