The Most Dangerous Thing in America Today. 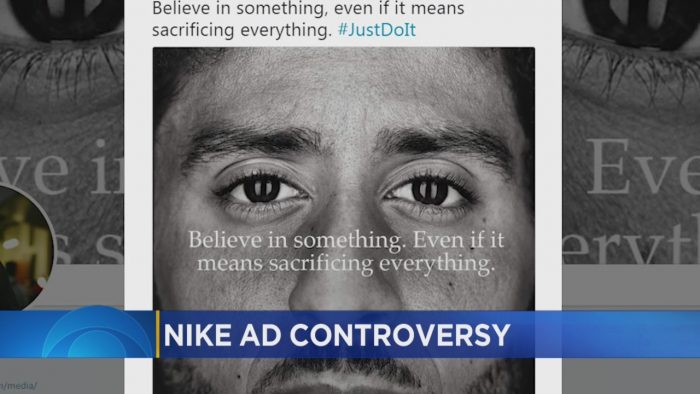 What do you get when you take football, the American flag, and a peaceful protest, then add an advertising campaign for an athletic shoe?

It doesn’t take much to set the interwebs ablaze with this opinion and that opinion, but this past week was an outrageous display all around. In times like these, we get to see the social climate of our country—often in shocking ways.

If you don’t kneel with Colin Kaepernick, you’re racist. If you do, you’re disrespecting our troops. If you wear Nike, you’re anti-America. If you burn your Nikes in protest, you’re disrespecting the Chinese workers who made them. Back and forth, on and on. I don’t know what’s wrong with people anymore.

But, I do know that Colin Kaepernick has every right to kneel during the national anthem.

I say this as the daughter of a Vietnam veteran, the granddaughter of a World War II veteran, and someone who does not pledge allegiance to the flag. To me, it’s a symbol of greed, oppression, and a long history of concealing the truth. The American flag at best is a symbol of freedom for the Caucasian, cisgender, heterosexual male—for everyone else, it’s subjective.

Being American is much like growing up in a religious family. We begin the process of indoctrination in our early childhood when we learn the Pledge of Allegiance. We’re taught to revere our Founding Fathers, but rarely learn how they treated the slaves who actually built the monuments we see in our textbooks. We learn about the explorers from Europe who “discovered” America, but gloss over how we took the land by force from the indigenous people, thereby executing one of the largest genocides in the history of the world.

We learn about the “purple mountain majesties,” “amber waves of grain,” and all that sh*t, but we are never taught to question what those things mean to us, or what they might have meant to our migrant ancestors.

We’re taught that America is the greatest nation on Earth. We have more freedoms and more opportunities, and everything here is better than anywhere else. Capitalism is the best, and democracy is the best, and we should just respect our leaders and follow the flock to slaughter, right? Because we’ve got the stars and stripes, guns, and Jesus! What could possibly be better than that?

This is the land of the free, home of the brave—never mind the starving children, the homeless vets, the social injustice, racial tension, misogyny, rampant addiction, crime, and growing wealth gap. This is ‘Murica, and when they play that song you better stand.

For me, or a professional athlete, or anyone else to say, “This symbol does not represent the same things to me that is does to you,” is not wrong.

We are all individuals, with our own beliefs, values, backgrounds, and view of the world. We are all entitled to feel the way we feel about things. We are all granted freedom of speech and freedom to participate in peaceful demonstrations. We are free to exercise critical thinking, to question the institution that is our government, to speak up when we see something that doesn’t agree with our ethics.

If life has taught me anything, it’s that ignoring a problem will not make it go away. Pretending everything is great will not make it so. And, let’s be honest, America has a lot of problems: school shootings, police brutality, families going bankrupt trying to pay their hospital bills—the list goes on and on.

It seems that since the 2016 presidential election, America is more divided than ever. The election was polarizing to say the least. We were forced to pick sides. Families were literally torn apart by this process of choosing left or right, red or blue. And sadly, we’ve never recovered from that. It’s like we watched mom and dad battle through a nasty divorce, and now we have to listen to everyone talk sh*t about our mama.

This has created a collective attitude of “us versus them.” This attitude is the most dangerous thing in America today—and until we fix it, it will continue to tear us apart.

We have to find a way back to some middle ground if we are ever to truly be the United States of America.

We have to go above and beyond “tolerance” to find complete unconditional acceptance of those who are not like us. This means we listen to understand. We lead by example. We love others at the human level, even if they’re wrong, even if they’re ignorant, even if they’re perpetuating antiquated ideas, even if they can’t see how narrow their view of the world is.

Believe me, I feel tempted to run away and hide from it, too. I live in the South—where the evangelical right is still thriving under the rebel flag. Sometimes I just want to run away to the West Coast to try to find the hippie tribe I’m certain I was separated from at birth.

Then, I remember that I have a purpose here.

Truly, the only way to combat this division is to get out of our comfort zones, and spend time with people who are different than us—different religions, different colors, different countries, and different opinions.

When we expand our view and spend time with people from other cultures, it helps us see humanity in a new way. It helps us see that though we have beautiful differences to celebrate, we are mostly the same. We have the same basic needs. We generally want the same basic things. We hurt the same when people treat us unfairly. We mourn when we lose our sons to senseless violence. We weep when our daughters are violated by men. We get angry when the things we hold dear are not understood by others.

We can say that “black lives matter” without saying that police lives don’t. We can say that we are feminists without hating men. We can be atheists without condemning those who mindfully practice religion. We can kneel during the national anthem without sh*tting on our military personnel. We can be allies to the LGBTQ+ community while in a hetero relationship. We can be allies to every community, no matter what our situation. We can, and we should, and we have to if we ever want to make America a symbol for freedom and equality again.

There is no us versus them, there is only we. Like it or not, we’re all in this together. The only way to make this country a better place is for everyone to stop seeing things in absolutes and generalizations, and start getting down to the human level of our issues. We have to stop insulting and dismissing people who express ideas that challenge our beliefs, and start listening respectfully to find some common ground.

For the love of humanity, please: just do it.

7 Underrated Qualities of a Healthy Relationship.