The Difficult Question we must Answer to Prevent School Shootings. 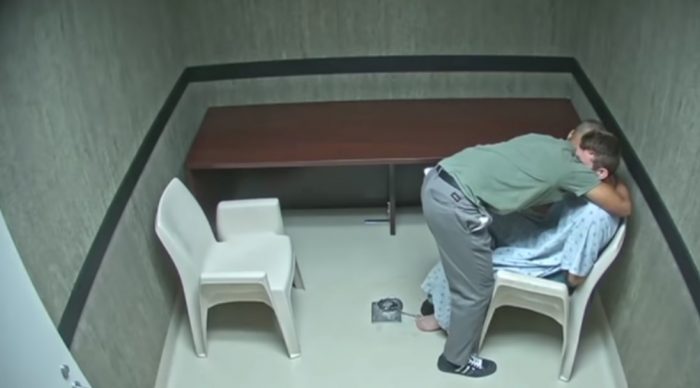 A recently surfaced video has captured a series of moments following the Parkland School shooting: the perpetrator who murdered 17 students was allowed to see his brother one last time.

What followed was perhaps one of the most beautiful and horrifying moments I have ever seen.

Although we must never forget the lives of those 17 bodies that were so tragically taken on that day, nor forgive the actions that so viciously snatched their bodies from this world, there is something remarkably human about this brief meeting—and it might give us deeper insight into how these tragedies could be prevented.

While Nikolas Cruz sits handcuffed to a chair in the very room where he confesses to his crimes, staring blankly into space as though his ties to this world have been severed long ago, the investigator brings his brother, Zachary Cruz, into the room—and we can’t help but notice a spark of life begin to illuminate the face of the killer.

It’s a strange look really—this is a strange boy in a strange moment—though it seems to be a look of complete surprise, unbearable shame, and dare I say, love.

“What do you think Mom would think, right now? She would cry…

What happened to your Instagram? I tried to text you literally a couple of days ago because I had this bad feeling in my heart.

Remember when we were in the hospital after Mom died, and I told you I had your back? I know you probably feel like you have nobody, but I care about you. I literally would put my heart out for you. I know I made it seem like I didn’t care about you at all. I know I made it seem…like I hated you when we were growing up. But the truth is, I just didn’t want to look weak.”

The boys’ mother had died a couple months before the shooting, leading Nikolas down a dark and murderous spiral that had begun tormenting him since youth.

The level of alienation needed for someone to act out this kind of predatory violence is almost impossible to describe to regular, everyday people, and perhaps the attempt to do so would be a lost cause. There’s a crucial gap to be bridged here between the deeply estranged young men who perpetrate these crimes, and the sympathies of the American public—who are generally focused on clamoring for the light instead of understanding the darkness.

When Nikolas is faced with his brother, he shows what most can’t honestly believe he’s ever had—a glimpse of humanity—as the tears stream down his face like a scared child in the night.

From my limited point of view, it seems that a conversation very much like this one could have stopped him from destroying all of those innocent human bodies on that fateful day, or at least could have planted a seed in his mind that would unravel his burning desire to take human life.

The brothers embrace each other, perhaps for the first and the last time, and we can feel the catharsis in the room as Nikolas hugs the only person alive who could possibly know his struggle.

It unmasks the monster and reveals a living, breathing human soul, not unlike our own.

I swear to god, every time I have the chance to see you I will come see you. I don’t care about no one else but you, right now. I care for you and I love you.”

Nikolas, through blubbered speech, tells Zachary that he cares for him and loves him too—before his brother is removed from the room and Nikolas is once again left to his thoughts.

I don’t think it’s useful to look at these crimes through an individual moral lens, nor do I necessarily believe that compassion for the killer is what we need—ultimately, gun violence is a public health issue.

It seems to me that what we’re missing is the terrifying fact that Nikolas Cruz is not special—and that our culture continues to produce these “lost boys” at alarming rate.

The question we must ask ourselves, as Americans and as human beings, is “What exactly is preventing me, personally, privately, intimately, from perpetrating these crimes myself, from destroying other human beings and snatching bodies from this earth?”

This is not an easy question to answer.

It has nothing to do with our moral fiber or our personal character.

Nikolas Cruz could be anyone—he is not fundamentally different from you or me. Don’t mistake cowardice for virtue. If we can’t come up with a good answer to the question, how can we possibly expect Nikolas Cruz to do the same?

It’s not a matter of hatred or sympathy, guilt or innocence, good or bad, nor is it simply a matter of politics. Although I’m not a proponent of an armed population, I don’t believe that taking all the guns away would get to the root of the problem—and it’s not going to happen anytime soon anyway.

We have many thousands of people in our own country, on our own soil, in our own homes, who want to destroy human bodies—and many don’t have a good enough reason not to. That’s the problem we must face, both within the fabric of our own soul and in the world around us.

The only reasonable response to this terrifying truth, on a personal level, is to answer the question for ourselves, and then spread that ethos to the world. True change comes from the inside, for we are all terribly alone on this planet, each of us with our beliefs, our own feelings, our own pain, and our own favorite flavor of ice cream.

We can only change the world around us to the extent that we recognize the profound sacredness of individual experience. Most of us rarely acknowledge the humanity of others because we’re trying to get through the day just like everyone else, and as a consequence, we’re only really capable of dealing with problems on the outside.

Civil rights laws were passed because the moral integrity of the American public was put on the spot, not because all of a sudden we realized that racism was a bad thing. We were confronted with a question, “Is it against my own self-interest to be racist?” and it turns out that it is—and the policy proposals followed.

These are the questions that change the world.

The closer a question feels to us, then the more impact it can have on the world – because we are no less than a fragment of the human experience, our body is a piece of the cosmic body, and the same goes for Nikolas Cruz.

Author’s note: When I speak of “bodies,” I mean to refer to the sanctity of living experience, the life of the body, rather than an impersonal depiction of the lives so tragically lost on that terrible day, the pain of which can never be undone or forgotten. I’m dedicating this article to the 17 lives lost in Parkland and their families, as well as all of the families that have lost loved ones due to gun violence and school shootings.

The Columbine Shootings Were 17 Years Ago: What Have we Done? Two Mass Shootings in 24 Hours: Welcome to Our New Normal. What if we Skip the Thoughts & Prayers and Do Something about School Violence?