The Raping of Justice. 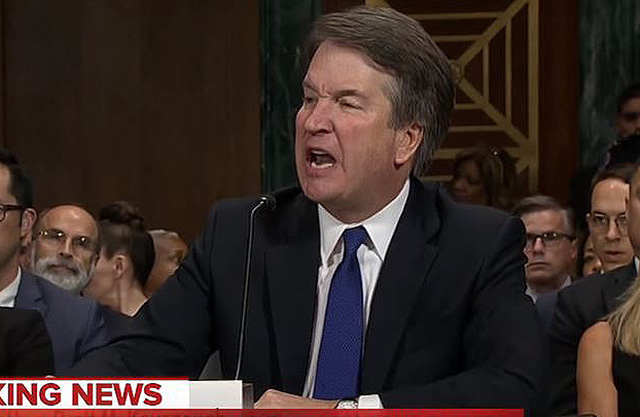 The high court drama that just convulsed the country is about more than an attempted rape happening over a generation ago and the right of Republicans to control the Supreme Court for the next generation.

And it is about more than the future of women’s rights and the last gasps of a dying patriarchy.

Rather, it is about the fate of justice itself, played out in the highest court, in the most powerful nation, at an historical juncture, turning on the conscience of a few key legislators.

But to truly grasp what is at stake requires stepping back to tell a deeper story in which justice itself stands or falls with the fate of a single justice, whose own foundations have just been shaken to the core.

The nation has almost entirely lost sight of the fact that Judge Kavanaugh was nominated by a president under investigation for treason.

If Trump could not have been elected without offering Russia something in return for their support, then his presidency is the illegitimate fruit of treason. And this would render its most consequential decisions likewise illegitimate.

But even if he knew nothing of these machinations—and would not have won without them—there would be reason to postpone major decisions that enshrined Russian interference in law. And it is unlikely he would have won without the vast campaign of lies accompanying their illegal email hack. Hence, a fairer process may have put Kavanaugh’s nomination on hold anyway.

Kavanaugh just happens to hold the distinctive position that a president should not be subpoenaed while in office, raising questions over why he was nominated in the first place. And his refusal to recuse himself from decisions pertaining to the subpoenaing of the president just makes his selection all the more suspicious.

But if the revelations of his past are true, Kavanaugh must have spent countless nights obsessed with how to protect himself when the accusations surfaced. And what better way than to offer protection to the man who could break him when things got tough. Hence, in not recusing himself, Kavanaugh demonstrated a loyalty Trump might reward by keeping his nomination in play long after it’s due.

In other words, if Kavanaugh knew there was a woman who might come forward to accuse him of attempted rape, he would have recognized it as an existential threat and shaped his candidacy accordingly, maneuvering to protect himself from being dropped at the crucial moment. And contemplating this moment for decades, he might well have shaped his whole persona around it.

Thus, like a pedophile who plays at being nice to deflect attention from his crimes, Kavanaugh would have played at being upright and decent. And yet, all the while, the evil of his past would have beat beneath the floorboards like some telltale heart. And when the moment of truth finally arrived, the pressures would be overwhelming, and not even the president himself would be able to save him from himself.

Courtroom drama is emotive because the prosecution of crimes has a way of revealing deeper moral shortcomings. Character flaws that have been covered up over the course of a life are suddenly revealed, and people on the stand must grapple with their own true selves. And while the senate hearing did not take place in criminal proceedings, they were just the same for all practical purposes.

Yet, everything is different when the law is divorced from morality and protected criminals walk free.

The impenitent criminal is brazen and insulting, aggressive and disdainful, feeling himself entitled and his accusers weak. Hence, the rapist blames his prey for her flirtations, the murderer for having been provoked. The impenitent justify their actions, however criminal, because they cannot live with the guilt. And justifying the unjustifiable puts cracks in the foundations of their characters.

Thus, Kavanaugh may well have been falling apart not simply because his true self was finally being put on full public display, but also because he was refusing to accept the truth. And the anxiety that grew in the gulf between Ford’s truths and his lies created an earthquake, sending tremors through every man and woman grappling with their own histories of sexual trauma.

But if the accusations against Kavanaugh were credible, then as a prominent representative of the law, Kavanaugh was lashing out not just at the Democrats on the judiciary committee but also the rule of law itself. For he was telling us that neither the truth nor the law mattered and that the powerful might do as they please.

And if Trump was the nation’s collective id grabbing at women as he pleased, Kavanaugh suddenly became its collective shadow of patriarchy demanding its right to rule.

And suddenly, the charade that Republicans were the party of law and order, and that the Republican-dominated court was an impartial institution representing a well-ordered state, where the vulnerable are secure from predation, was crumbling all around us, along with the very justice in which this lawless charade was so poignantly playing itself out.

And yet, as magnetizing as it appeared, it was only an issue because Republicans had already stolen the court when they broke all precedent and refused to grant even a hearing to president Obama’s nominee, Merrick Garland. Everybody, it seemed, had lost the plot, and for the very same reason victims of sexual abuse do not speak out: it is easier to live with the lie than face the reality that the perpetrator all too often walks free.

But the nation had straddled this divide between anarchy and the law before and bridged it in the exact same way.

Republicans secured their control of the court decades ago when Republican-appointed justices took it upon themselves to allow a flawed presidential vote count to stand, thereby throwing the presidency to a Bush administration that would further pack the court with conservatives.

If Republicans had been playing by the rules, we would be looking at a more liberal court, dominated by the appointees of perhaps five successive Democratic administrations. But to sustain the illusion of a nation of laws, Al Gore put on a brave face and accepted the results of an election whose aftershocks are still shaking the nation.

And the flood of money that inundated the system after their decision to strike down campaign finance laws in 2011, and all of the powers granted to the corporations that have so corrupted our politics, are the logical consequences of continuing with this illusion. And yet, it is all coming to a head in the coming vote.

Perhaps it was the brazenness of it all this time, perhaps it was the incivility, but the cracks that appeared in Kavanaugh’s mask seem to be fissuring through the nation, as the edifice of lies is crumbling before our eyes.

The only question that remains is whether we will look deep enough and fight hard enough for the truth this time to prevail.

There are no doubt many senators willing to vote for Kavanaugh in spite of his guilt, but many seem to support him because of it. For it is precisely their right to rule that is at stake, and the grounds upon which it rests are as shaky as the patriarchy that is crumbling atop Kavanaugh’s head. Republicans need brute force to sustain their rule. They need justices who have no compunction with lying. And they need leaders who can transform their vulnerability to hate.

But we the people have our own set of needs.

We need to speak the truth, to resist the lies, to challenge the aggressors, and to vote in record numbers like our freedom depends on it, and it were the last real election of our lifetimes—because in truth, this may well be the case.