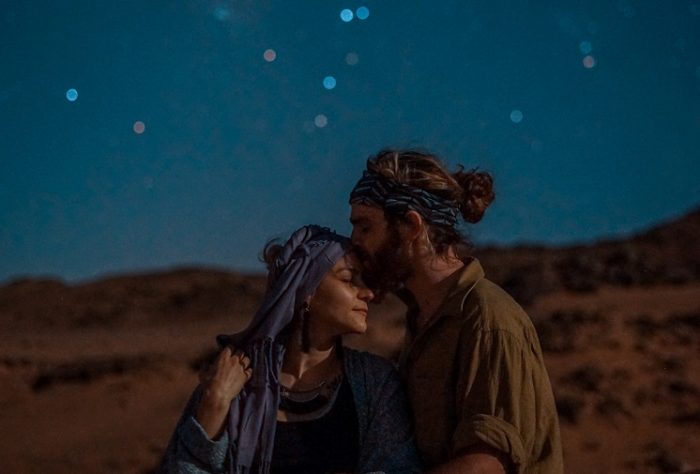 At midnight, on October 23rd, when the Sun reached its greatest distance below the horizon, Uranus stood directly opposite the sun in the night sky, shining blue and bright in the constellation Aries.

According to ancient Egyptian astronomy, Aries was associated with Amon-Ra, the king of gods, who was depicted as a man with the curled horns of a ram, representing masculine fertility and creativity.

In ancient Greek mythology, the union of the divine masculine and feminine is represented by Uranus, Father Sky, and Gaia, Mother Earth.

Out of the darkness and the deep arose Earth, and she reached out to her equal, Sky, who rapturously and radiantly returned her embrace and touched her earthly face on every side, and with their union of love the world was made.

In their lovemaking, a shower of semen fell like rain from the phallus of Father Sky and spilled into the sea, and from the frothing and foaming waves stepped the goddess of love, Aphrodite.

From their union manifested also their other divine children, the 12 Titans, who were in turn progenitors of the 12 Olympians.

In the Indian Tantric tradition, the universe is created, sustained, and permeated by two fundamental forces in perpetual and perfect union. These universal forces are symbolised by Shiva, the divine masculine, and Shakti, the divine feminine.

Shiva represents the formless, limitless, unchanging elements of the universe, while Shakti is the dynamic and potent energy that brings these elements to life and causes them to act. It is this action of life that is called karma.

Before the dominance of monotheism, religions and spirituality in general have more usually viewed the divine as a cooperative balance, a union between a masculine principle and a feminine counterpart.

This more enlightened understanding of the universe as a divine union and expression of both male and female can be seen in cultures all over the world: In old Egypt with Amon-Ra and Hathor, in ancient Rome with Jupiter and Juno, in the Norse tradition with Odin and Frigga, and in pre-Islamic Arabia with Allah and Allat.

Even in Christianity, within its strict theological patriarchy, an instinctive balance is often sought with the passionate devotional worship of Mary, the mother of God.

It has long been my understanding that the divine masculine and feminine are purely symbolic rather than literal personalities that can be bought with benevolence, paid in prayers, or acquiesced with atonement.

The divine masculine and feminine symbolised in so many traditions appear to be the most accurate and appropriate metaphor to illustrate the nature of our universe and the dynamics of conscious existence.

These qualities are not exclusive to one or the other, but rather they are shared qualities, manifested and expressed in different ways in us all. To be complete, to be whole, requires our inner masculine and feminine sides to be in balance.

It is not only men who must acknowledge and honour the divine feminine in themselves, in their paramours, their wives, mothers, daughters, and sisters.

It is also women who must acknowledge and honour the divine masculine in themselves, in their lovers, their husbands, fathers, sons and, brothers.

Duality is simply to make a distinction between one thing and another—a man and a woman, let’s say. It is a normal and necessary distinction in our understanding that men and women complement and support one another, need one another, indeed cannot exist without each other.

Dualism, on the other hand, is to lose ourselves in the illusion that difference means separation. Thereafter, it is suffering caused by the construct of independence, rather than accepting the reality of interdependence. Dualism is blind to itself, destroying itself with the untamed tribalism of us against them.

Our human mission is to transcend the dualism disturbing our hearts and minds, and honour both Shiva and Shakti, Osiris and Isis, Mary and Jesus, as they abide in balance within each of us, manifesting the harmony of divine love.

As we chart our way through this turbulent sea change we must never forget that we depend on one another to sail our ship through this life, and find our way back to the harbour of hope, and home.

Today, the god of the sky stands in opposition to the goddess of the earth. Yet it is said by the wise, that not only does like love like, but also that opposites attract.

Conscious men and women the world over, it would appear that now is the moment to act. For it is our actions that define us.

We are presently enslaved in a pattern of toxic masculinity that is countered with attrition by corrosive femininity. If we are to live together in a civilised world, we can no longer regard one another as the enemy. We must rediscover our mutual trust and respect, and manifest our divine harmony.