What the hell is MGTOW: Men Going Their Own Way? 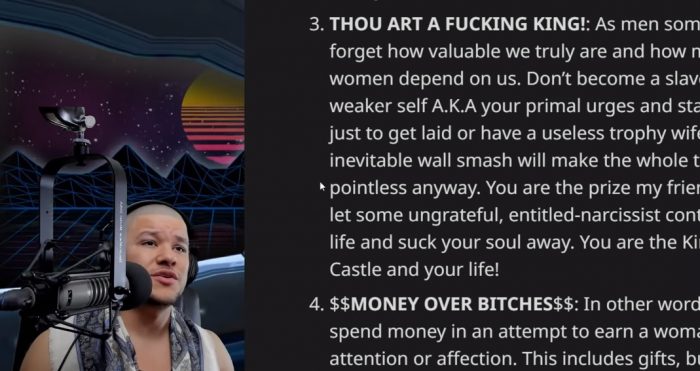 We live in a strange time.

As the traditional structures of Western society are fading, it seems that we are all scrambling for an identity to fill the void in our hearts.

There is a profound emptiness in our culture, a feeling of despair, like we left home a long time ago, never to return. Human beings cannot do without a feeling of belonging, a sense of identity—and when that identity is stripped away, we will do almost anything to get it back.

Political and social life have descended into a sprint for power. There are no longer any lines drawn between the personal and the political, like we are living in some strange dystopian nightmare.

Any stance you have, any identity you take on, any position you hold, any ideas you like will be seen as the sum total of who and what you are according to the curve of mainstream culture—which is indicative of the collective identity game we are all taking part in.

Identity politics is an ego trip.

It can only lead to further and further dividedness, for we live in a world of polarities—and every identity contains the seed of its opposite. Until we uncover a guiding principle that transcends personal identity or political persuasion, the process of polarization will only continue, until our country rips apart at the seams.

A young man with sunglasses, speaking with a kind of hardened and unsettling confidence, talks about the principles of MGTOW, which stands for “Men Going Their Own Way.” I had never heard of it.

MGTOW is an online group of disenfranchised young men who have chosen voluntary celibacy to make sense of their role in society, which they feel has been under attack by our culture.

At first, I found this idea to be ridiculous and maybe even sexist—but the more I listened, the more I understood how this narrative fits into these strange times.

I truly believe young men are the most underserved demographic in our society when it comes to finding a path in life. Fatherhood, right masculinity, and the paternal spirit have lost their place in our world, while postmodern relativism has become the rule, not the exception. We have lost faith in the holy father. The effects of this can be felt from the inner city, where 70 percent of children are born out of wedlock, to the middle class and beyond, where men are vastly underrepresented in modern academia and overrepresented in prison populations.

MGTOW is a reaction to mainstream culture, which tragically undervalues the transformation from boyhood to manhood.

Don’t get me wrong, women are underserved and undervalued in many ways too—but the key difference is those grievances are highly documented and politically relevant.

For instance, we never talk about the rates of violence in Chicago without a guilt-laden footnote of “racism,” because it’s an issue that disproportionately affects young men—specifically concerning the question of what it means to become a man without turning to violence.

On the other hand, the media is more than happy to talk about “rape culture” or “the patriarchy” without skipping a beat.

I’m not saying men are “oppressed,” nor am I crying victim. I am just pointing out how easy it is to create a group narrative that’s rooted in identity politics.

I’m not a “meninist”—I think life is tough for most everyone. The problem with blurring the lines between identity and politics is that it creates a kind of vacuum where ego is paramount and power is sanctified, and what comes out of that vacuum can only perpetuate the same destructive tendency. MGTOW came from this vacuum, out of the great void in modern culture, and it should be approached in the same manner as any other identitarian movement: with caution.

The MGTOW inscription reads as follows:

“MGTOW – Men Going Their Own Way – is a statement of self-ownership, where the modern man preserves and protects his own sovereignty above all else. It is the manifestation of one word: ‘No.’ Ejecting silly preconceptions and cultural definitions of what a man is. Looking to no one else for social cues. Refusing to bow, serve and kneel for the opportunity to be treated like a disposable utility. And, living according to his own best interests in a world which would rather he didn’t. In other words…common sense for men.”

The problem with MGTOW, in my opinion, is that nothing can be attained through avoidance.

I don’t know where I would be without the women in my life, and I pity the fool that deprives himself of his own femininity. I would never downplay the struggles that women face in our society, but I would hope for the same respect for men—though unfortunately, I don’t personally feel like that respect has been granted.

That’s why MGTOW exists, for better or for worse.

Rejecting a culture that we don’t believe in is only half the fight, while the other half must involve bringing our ideas into public discourse—and that’s where MGTOW loses me.

There is conflict between men and women. I’ve never met a man who didn’t have some resentment for women, likely rooted in his relationship with Mom, and I’ve never met a woman who didn’t have some resentment for men, likely rooted in her relationship with Dad. Instead of falling back into gender tribalism, choosing group-identity over individual sovereignty, I would say we need to have a serious conversation about the relationship between the masculine and the feminine in society—both having a necessary place in our world.

I personally believe that the ethics of manhood, of boys becoming men, are profoundly missing in our culture, and shedding light on the journey to manhood will ultimately foster the feminine quality. Yes, that’s right, manhood and womanhood actually complement each other—and if we can learn to walk this fine line together, maybe some of the unnecessary hostility will be gone with the wind.

Guess what: it’s okay to have bitterness toward the other gender. And you don’t want to deny that part of yourself.

This is to say, we must acknowledge our bias, our anger, our bitterness, and our darkness before we can rise above.

We don’t want to suppress our feelings, which is to suppress reality; to suppress reality is to sign one’s own death certificate. Unfortunately, there is no room for introspection in the identity politics arena. We must “go our own way,” whatever that means for you as an individual.

This whole mommy versus daddy thing is really not working. The animus between men and women is only being reinforced by mainstream media. Men can be creepy f*cks, and women can be f*cking evil. If you are looking for evidence of either, it’s not hard to find.

The challenge is to find common ground, similar concerns, and intertwining feelings that far outweigh the conflict we might have with each other—to recognize ourselves as fellow travelers along the winding road of life. If we actually talked to the other side, in a personal and intimate way, I think we would find more allies than we might assume.

Where Have All the Good Men Gone? The Dating Reality for Women Seeking The One.