What I’ve Learned from Loving an Alcoholic

We had been on just one date before my fiancé said, “I don’t drink.”

Logan shared this very important piece of himself as we walked to a restaurant, his American Staffordshire mix, Piper, trotting along next to us.

For a moment, I was quiet. This is not something I’d ever heard before on a date.

My initial reaction was to ask: “Why not?” But that question felt too personal, if not actually offensive, given the nascency of our relationship. By asking that question, I felt I would be implying that there was something wrong with him because he doesn’t drink alcohol. I certainly didn’t want to send that message.

Still, I was curious about his reasons and didn’t want to let the topic drop just yet. So I said, “Oh, is this a lifestyle choice?”

I wasn’t exactly sure what that meant, but the vagueness of the question supported my quest for clarity.

Logan said yes and went on to briefly explain that he believes not drinking is better for his health.

So maybe he’s just a health nut, and it’s not like he has a problem with it, I thought. Because, if he did, I feared that this date would be the end of a very short courtship.

Would Our Values Align?

Drinking is a big part of American culture, and Logan and I live in San Diego, where breweries and urban wineries have popped up on virtually every corner.

But, more than that, alcohol is part of my life. I love sitting outside, sipping wine or a cocktail in the summer, and enjoy the occasional happy hour with friends.

I recognized that Logan’s stance on alcohol didn’t necessarily preclude consumption for me; however, I feared that it would result in a disconnect between us.

How would he react during the holidays when my family is drinking mimosas with breakfast? Would he go to parties at my friends’ houses where people are sipping wine and offering him beers? And what about afternoons in the backyard – would I be consuming alone?

I wasn’t sure if his lifestyle aligned with my own. With a single statement, I was questioning if I could envision a future with a man who doesn’t drink.

When we got to the restaurant, I hesitated before ordering a glass of wine. Would this make him feel uncomfortable? Was this completely inappropriate, given what he’d just shared with me?

On the other hand, what about me? Should I not drink even though I wanted to?

Finally, I just said it, “Would you mind if I had a glass of wine?”

Logan didn’t, and I breathed an internal sigh of relief.

I absolutely respected his choice not to drink, whatever his reasons were, but I didn’t want to, nor did I think it was fair, for me to change who I am for someone else.

We Learn By Exploring.

Logan and I had a good time on that date and continued to see each other.

A couple of weeks later, I asked him if he wanted to come to my friend’s Halloween party. He politely declined.

As much as I liked him and was open to introducing him to my friends, I was relieved. I worried that I would have to baby-sit him or watch my consumption to avoid making him feel uncomfortable.

On the flip side, my mind also shifted to the future: would he always want to stay home from parties, leaving me to fly solo? That wasn’t the life I wanted.

A few months into our relationship, Logan clued me in to his reason for not drinking.

Alcoholic. Such a loaded word.

I never imagined that I would date, let alone marry, someone who identifies as an alcoholic. As a psychotherapist, my brain traveled down the road to relapses, abusive behavior, and a marriage falling apart.

It might be an unfair generalization, but this is what I feared. Marriage would be hard enough already. What would it be like to add this extra complication into the mix?

A Shift in Perspective.

As our relationship has progressed, I’ve been able to see how Logan handles himself in various social settings. By and large, he hasn’t had any trouble being at events where people are drinking. And on the rare occasion where he thought he’d feel uncomfortable, he opted not to go.

Somewhere along the way, I took a deeper look inside myself and reflected on my thought process. I wasn’t proud of my assumptions about how Logan’s lifestyle choice would affect our relationship. I jumped to unfair conclusions without knowing anything about Logan, his past, or reasons for not drinking.

I recognized my own humanistic need to want to control the future. Instead of exploring with curiosity, I explored from a place of fear.

All too often, we, as humans, struggle with uncertainty about the future. It’s easy for our brains to assume the worst case scenario. But that worst case scenario rarely comes to fruition, and even when it does, we tend to underestimate our ability to cope.

We all have internal battles and weaknesses. I am not without my own struggles and challenges. Despite this, I chose to single out one of Logan’s, despite the fact that I’ve only ever known him to have it under control.

Furthermore, I have learned that because Logan identified his problem with alcohol in his mid-20s, he’s extremely self-aware. He’s cognizant of his internal demons and, in large part, knows his trigger points.

There is no telling what our future will bring, and there’s no limit on the bad fortune that could befall either one of us. Whether related to our mental or physical health, neither of us is guaranteed to stay healthy. In fact, at some point, we both will experience health issues of some sort.

With this realization, my outlook has changed. Sure, I still worry about the future from time to time. I’m only human. But more often, I feel fortunate to be with a man who has confronted his demons and has made decisions that have led to positive well-being.

Alcohol is ubiquitous in our culture, and it’s hard to avoid. It takes a strong, self-confident person to turn down a drink when everyone else is having one.

Are there still times when I wish we could share a bottle of wine together? Of course, but it’s also expanded the manner in which we connect. Alcohol is not a prerequisite or necessity for connection. If it were, that wouldn’t reflect positively on the foundation of our relationship.

My goal now is to understand. Our relationship is still relatively new, a few months past a year. There’s so much I don’t know about him but want to know.

However, I won’t learn by making assumptions. Instead, I will learn by leading with curiosity and inquire from a place of gentleness and love. Judgment breeds shame, which Logan and I agree this is anathema to healthy relationships.

As we start our married life together next year, I will keep this lesson close to me. When faced with inevitable trials, we will vow to chose curiosity, compassion, empathy and understanding. Now and always. 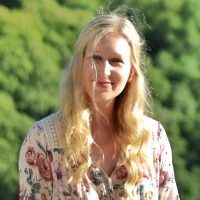 A former attorney, Darcie now works as a writer and psychotherapist. She believes in the value of connection with others, trusting your individual journey, and loving yourself… Read full bio