4 Ways to Uncover your Golden Shadow during Eclipse Season.

Eclipses represent a dance of light and dark—similar to our personal psyches and souls.

They have rhythms and phases that we can predict, and then at the same time feel chaotic. During an eclipse, as the sun, moon, and Earth play in shadows, we too have the same opportunity.

In ancient times, these astronomical events were viewed as mysterious omens or punishments from the Gods. But now, eclipses can be predicted down to the minute, and we know that they usually occur in pairs every six months.

In the same way, our personal shadow can feel scary or numinous, until we become more familiar with it and appreciate its cyclical nature and deep connection to our own light, or golden shadow.

As is the case with solar or lunar eclipses, our view of a luminary in our solar system becomes blocked, suggesting that we have to be in darkness in order to see our light. In other words, we have to come into contact with the worst parts of ourselves before we can discover the best.

In Jungian psychology, the soul strives for wholeness, and an important step in discovering this involves reclaiming parts we may have rejected (aka our shadow).

Our shadow forms early on in our psyche, as we are told how and what we should or shouldn’t be. We are praised for being good and reprimanded about parts of us that are “bad.” We learn to hide and disown any parts of us that our parents or society would view as shameful or destructive.

Of course, not all that glitters is gold when it comes to the shadow, as this hiding creates an internal splitting and forgetting that while we reject the bad parts of us, we also push away the good that comes with them—the golden shadow.

Another idea coined by Carl Jung, these positive traits, which become invisible to us, we then see in others but may not claim for ourselves. We project and disown both our negative and positive shadow, sometimes making it difficult to see either. While we speak often of the dark shadow, it is equally important to give the golden shadow time in the sun.

The golden shadow often reveals itself through our insecurities and other qualities that speak to our life challenges. Early traumas or deeply rooted self-doubt create our superpowers and strengths that we eventually share with the world as a part of our healing. This submerged potential is a portal to our power and holds the keys to our unconscious, undeveloped, and underdeveloped skills or character traits linked to our life purpose.

I look to my golden shadow to discover more of my life legacy, as it reveals where and how my healing and pain meet the gifts I have to offer the world. Our shadow and golden shadow are unique to us and something to be proud of, even when it may feel otherwise. The other side of shame about our shadow is the portal to our power, made possible by some gold digging.

Use these tips for discovering deeper treasures in the darkness:

“Envy is a misunderstood compulsion to achieve something within oneself that one has neglected.” ~ Marie-Louise von Franz

I used to dislike my jealousy. It often showed up when someone was recognized for their creativity or accomplishment, and, yet again I would feel unseen for my own vision or inventiveness.

I’ve learned to sit with my jealousy and love it. Not only does it tell me more about what I want, but also about the qualities I have that I might be repressing, as they could be parts of my shadow I haven’t seen yet. Jungian psychologist Marie-Louise von Franz described envy as a deficiency that needs realization or a lack that wants fulfillment. It points to our own, often repressed self-expression to things we wish to embody more.

“We build our pedestals out of untapped potential.” ~ David Richo

While the dark shadow often shows up as dislike or resentment of someone’s qualities, the positive shadow reveals itself in intense admiration. Perhaps we worship famous people’s humor or intelligence while denying our own.

One of my favorite authors and psychologists, David Richo, whom I look up to very much, said the quote above in a course I attended. It spoke clearly to looking at our tendency to idolize someone to understand more of our own potential and it set the tone for all of us to ground more into our own value during the workshop. Throughout the day, I became less and less interested in what he had to say and instead curious about finding new ways I could express my own wisdom in the world. For this reason, examining whom you admire and why accesses the golden shadow with lightning speed.

Often the parts of ourselves where we feel the most wounded or that something is wrong with us ultimately become our greatest superpower. Like many, my own insecurities often create a sense of unworthiness and emptiness.

Now working as an astrologer, I help soothe self-doubt in others by acknowledging their superpowers in their astrology chart while reaffirming my strength in seeing the power in others. Knowing our gifts allows us to live in the space of gratitude for our own talents and minimizes moments of self-doubt.

“Negative only means not yet redeemed by conscious integration.” ~ David Richo

Re-examining our beliefs outside of norms of what “bad” and “good” can mean may reveal blessings disguised as burdens. When we seek the treasure in something instead of a quality that needs to be overcome, we can come more into contact with a superpower we didn’t even know we had. An example would be that our society tends to think of extroversion as being valued over introversion, though now we have seen how much success comes from internal discovery.

The golden shadow has counterparts and opposites that we may need to rewire our thinking to see clearly. With this alchemical process, the aspects of ourselves we don’t like help us see more talents we may not have even realized we had.
~

Like the journey of exploring the dark shadow, the discovery of our golden shadow never ends. We will catch glimpses of our inner light, and then at another time we will need to go down deeper into darker, more painful places and unfamiliar territory each time. Though, just as with the shadow itself, with each dive under we access deeper intimacy with ourselves and others.

Discovering the golden shadow is priceless. Not only does it offer the ability to shine more brightly in our paradox of light and shadow, but knowing how our painful places become our greatest gifts in the world truly is worth its weight in gold. 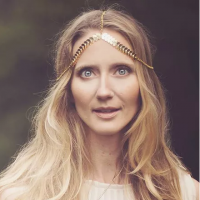