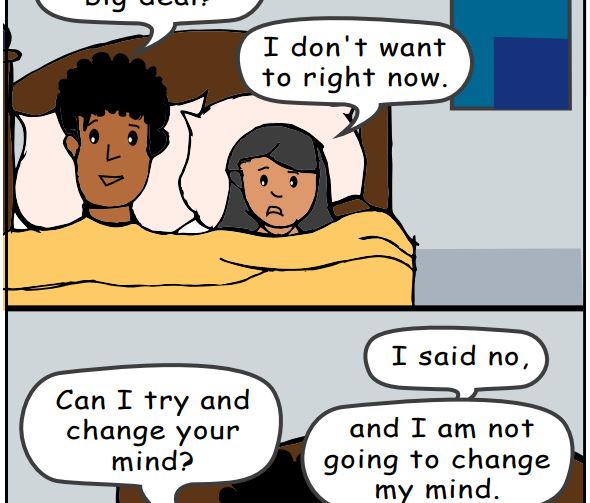 I was still a virgin and I was hanging out with this girl.

We had been hanging out for about a month. I was over at her place and we were watching some TV, and occasionally making out a bit.

Up to this point, I still hadn’t had any kind of sexual contact beyond kissing, or that one time at summer camp when I had touched a boob. It was glorious.

And that’s when the sh*t hit the fan.

She pulled completely away from me. And she called me gross and disrespectful. She was really upset.

Understandable. We hadn’t been making out when I asked and judging by her response, clearly she didn’t want anything sexual at the time. I was clunky as hell at “seduction.” Her reaction, however, shook me hard.

I felt terrible. I also felt ashamed of myself for having that desire. I was already feeling a lot of shame for wanting to be sexual, but this just made it worse.

A few years later, while still at university, I had gone on a few dates with another girl. And I say “girl” because we were young. I was a boy. She was a girl.

On our fourth date, she was driving me back to my dorm.

Outside the front door, while still sitting in the car, I wanted to kiss her. But I didn’t know how. I was still clumsy. I wasn’t a virgin anymore, but my experience was still pretty limited.

I can’t remember specifically what I said, but it was something to the effect of, “Hey, can I kiss you right now?”

She said, “F*ck Ryan, you just ruined it! God! Don’t ask! I want you to just take me! I’m not going to kiss you tonight.”

So, again, I felt horrible for asking and I felt like my desires were wrong and shameful.

While growing up, I had heard stories of men being sexually aggressive and assaulting women. I didn’t want to be that way—but asking seemed to be met with anger and humiliation, as well.

So, I started to internalize that my sexual desire was wrong and harmful.

As a guy, my sexuality was expected from women and men, but whenever I started to show even the tiniest bit of sexual interest, it was met with shame.

I knew that some women wanted to have sex. But, because I learned that asking was so humiliating (from my previous partners), and other girls taught me directly, and indirectly, that “a man takes what he wants”—I was completely confused.

When I would turn to the internet for answers, in many online threads, women would say “Ask! It’s sexy” and also, “Don’t ask! Just read me and take me. Asking is gross and a turn off.”

Obviously, these girls were no more educated than me, so I’m not blaming them. I was also ignorant.

That said, their biases and beliefs shaped my beliefs about my own sexual desires, and how to reach for physical intimacy.

That’s how human interaction works. We feed off of one another, and I fed off of the feedback I got from women.

So, I learned that in order to get my sexual needs met, I had to be manipulative. I had to lie and tell her I wanted a relationship. I had to “trick” her into coming back home with me.

I had to find indirect ways of getting what I wanted, because being direct and asking was usually met with three outcomes:

>> Sexual desire is dangerous and gross and wrong. But women and men both expect it from me.

>> Asking is weak and a huge turn off.

>> If I don’t ask, and it’s with a woman who wants to be asked, I could go to jail or be accused of assault.

That bothers me, a lot. I cringe thinking about these things today.

And it also makes me angry.

Here is the interesting thing, though. I actually learned about my sexuality, and how it’s viewed, pretty much completely from women. I read articles written by women. I listened to my female friends. I reacted to women I tried to date and be physically intimate with.

The guys I spoke to only said things like, “Yeah, we were bangin’ last night!” Or, “Yeah, we had sex twice last night haha!” Or, “She loved it when I was spanking her and pulling her hair. She liked it rough.” Or even, “Yeah, we actually just had like, slow sex. And it was awesome!”

So, on one end of the spectrum, I was met with shame and fear. And on the other end, I was getting overly simplistic information that I couldn’t apply to my experience or reality.

This is where my sexual journey began. A dichotomy of “sex is expected from men” while also feeling fear, shame, and confusion about it.

Gentlemen, I am here to tell you that there’s a better way.

There is zero guilt or blame in anything that I say here to either men or women (trans or cis). In fact, I despise blaming and do what I can to avoid it entirely. With that said, here’s a recommendation on the way ahead.

A friend made a comment in my social media about this very topic, and he worded things beautifully. I believe in giving credit where credit is due, and I don’t want to re-create the wheel.

This is something I’ve done numerous times in the past, and it works wonders. This is how my friend worded it:

“Hey, so I know everyone has different styles for enjoying intimacy. Some women like a guy to ask before, let’s say, kissing a girl. Others like the guy to just sense when a woman is feeling that spark, and then making a move. Which would you say you prefer?”

And you can add:

“I’m a big believer in healthy boundaries, so if you ever feel uncomfortable with something, please know that I won’t feel bad if you want to say no, or not yet. I don’t want to put you into a situation where you feel pressured.”

Take the structure of this and make it your own. It doesn’t need to be word for word.

For the women who are reading this, know this: I am truly sorry for the mistakes I have made. I am doing everything in my power to be the change I want to see (as cliché as that sounds).

While I do this, I’d also like to ask for a favour and for some support.

Please tell your friends that if a guy doesn’t “take you” the first few times you have sex, it doesn’t mean he’s not able to go after what he wants. It means he respects you as a human, and doesn’t want to risk making you feel unsafe or uncomfortable with him, especially in the #MeToo era. (A very necessary conversation too, I might add, albeit uncomfortable.)

Please tell your friends how damaging it is to say no if you’re playing mind games and you really want to say yes. I remember seeing a video of a woman with a lot of attitude saying, “Guys, if I say no, I mean yes. I want a man to take me.” If you’d like to be “taken” when you say no, that is literally the definition of rape.

If you want your “no” to be taken seriously, tell your friends who play these games that it’s dangerous. Refer them to some online content that explains how to enact a rape fantasy in a healthy and safe manner, with a partner who has agreed to this beforehand.

Please also tell your friends it’s damaging to judge a guy if he asks to kiss you, or do anything sexual. Respectfully asking should never be a problem, so long as the boundaries are respected after your equally respectful response.

If you don’t like being asked for a kiss, then say this: “I’m not going to say yes, or no. I prefer a man to read me, and kiss me. I’m strong enough to say no or pull away if I don’t want it. So…maybe I want to kiss, or maybe I don’t. You’ll have to find out a bit later if you try.”

Ladies, we are not your enemy.

Us men want to build a life with you. So let’s work together, stop the blaming, and recognize our own roles in the intimate equation. 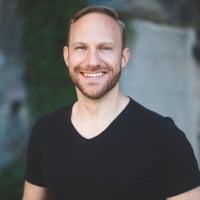 Ryan Thomas ended his 11-year army career as a Captain. He now serves as a sex and relationship coach for men through his content, group workshops and individual coaching—he… Read full bio

7 Mindful Communication Practices that Improved my Relationship. 10 Unmistakable Signs of a Woke Dude. How to Attract an Awakened Man. The Communication Tip that saved Will & Jada’s Marriage (& will Save yours Too).
See relevant Elephant Video