What my Obsession with Cults & Religion has taught me about Family.

Growing up, I was always completely fascinated with religions, faiths, and cults.

Considering that I wasn’t raised in a particularly spiritual atmosphere, I’m not sure where the spark of interest was first ignited—but I do remember being a very strange little second grader, walking up to kids in my class and asking them what they thought about God.

One of my earliest memories of exploring faith was as a young child, maybe eight or nine years old, reading passages out of the book of Revelation in the Bible. I was completely obsessed with the concept of “the end of days,” and what that would mean for anyone alive on Earth when that was supposed to happen.

But as I read this, I kept thinking, I can’t imagine that an all-loving, all-knowing, all-creating God would ever punish his children in such cruelty for all of eternity.

Even as a child, I couldn’t accept that my earthly, flawed, human father could have more compassion and forgiveness in his heart than God. It just didn’t make sense in my mind—and especially not in my heart.

From elementary school onward, I independently studied many different religions—even dabbling in a few by asking classmates if I could tag along to their services. By high school, I’d attended non-denominational Christian worship services, Southern Baptist sermons, Catholic masses, Jewish shabbats at synagogues, Chinese New Year ceremonies at the Buddhist temple, and even Full Moon Circles with a Wiccan coven.

If there was a class on religion or philosophy, I took it. If there was a documentary about a cult or faith, I watched it. I would consider myself an expert on modern cults and religion at this point. It is probably the thing I’ve dedicated the majority of my life to studying.

In over two decades of research, one of the most important things I’ve observed is why and how people get involved in cults in the first place, how I believe it all comes back to reinforcing the perceived separation between humanity and unconditional love, and how—perhaps in varying degrees—the average family isn’t too different from a religion or cult.

But before moving forward, I think it’s important that we take a look at the origins of few key words we’ll be using here, so we can see where they really came from in the first place:

Religion—Middle English (originally in the sense “life under monastic vows”): from Old French, or from Latin religio(n- ) “obligation, bond, reverence,” perhaps based on Latin religare “to bind.”

Family—Late Middle English (in family; also denoting the servants of a household or the retinue of a nobleman): from Latin familia “household servants, family,” from famulus “servant.”

We can see that all of these words have similar connotations, all coming down to one core message: your power is outside of yourself, you are only as strong as your connection to the family, and you must do as the higher power commands in order to stay in the family.

A member of a religion who is not respecting their obligations will surely be cast out.

A member of a cult who is not worshipping to the letter of the law will surely be cast out.

A member of the family who is not doing their work and contributing to the household will surely be cast out.

But it’s the origin of the word “love” that really hits me like a punch in the gut. “Love” and “leave” come from the same roots.

No wonder so many people approach love with the energy of fear. The word itself is designed to imply that you must “capture” it, that love itself is outside of you—that it could potentially leave at any time.

I vividly remember being a sophomore in high school, listening to a friend of mine as she told me she’d been couch-hopping for weeks now. She’d been excommunicated from her church, and her family had kicked her out of the house. She was 15 years old. A little moody, a little rebellious—but all in all, a solid kid with a good heart.

When I asked her what she’d been excommunicated for, she said she’d asked too many questions, and “the last straw” was that she had gotten into an argument with her parents about wanting a 16th birthday party—something strictly forbidden in her religion and social culture.

If you’ve seen the docs and shows like I have, then you already know that this is a common practice in cults. The Church of Scientology and The Jehovah’s Witnesses are two well-known groups with reputations for “disconnection policies,” where members can be excommunicated from the church and are essentially exiled from everyone and everything they know.

The HBO Documentary, “Children of God: Lost and Found,” highlights the experience of a group of ex-members of the Children of God cult as they try to go back to their still-in families and get answers about things that happened in their childhood in the cult. It is agonizing to watch these young people rise up with enough boldness and self-love to demand the truth, to drive all the way from California down to Brazil, only to be shot down and shut out by people who were supposed to be “family” (the actual term that members use for themselves and anyone in the cult).

We can see similar experiences of being “iced out” of the group in many documentaries examining modern-day cults, including the Buddhafield cult in “Holy Hell” on Netflix, the Church of Scientology in “Going Clear” on HBO, and in Leah Remini’s “Scientology: The Aftermath” series on A&E. These are all clear examples of misuse of power, cult-like obedience, and brainwashing in action, and a perversion of what it means to have a relationship with God.

Listening to the horrific stories in these documentaries makes it overwhelmingly obvious that these groups have absolutely nothing to do with love or with God. It’s clear that these types of actions are unacceptable.

But where, then, is the line?

It isn’t too far-fetched of a comparison to look at how a LGBTQ+ individual may feel in anticipation of “coming out” to their conservative family members.

Or how a student struggling with a subject feels coming home with a grade deemed “unacceptable” by their strict, performance-driven parents.

Or how a teenager with a body type that isn’t “socially acceptable” feels when they are given a side salad at the dinner table while their “average-sized” parents and siblings eat pizza.

Any time you are feeling fear or shame, that you will be cast out of the group or met with anything other than acceptance, support, and celebration—you are in a situation where you have been tricked into giving away your power. You are in a situation that is fundamentally opposite of what it means to be unconditionally loved.

But there’s good news: as soon as we recognize where we have allowed ourselves to be tricked into giving away our power, into believing we are anything other than pure love—we have already broken the spell.

We have already started to take our power back.

Despite what the root of the word itself implies, love is not something that can be gained or lost. It is—or it isn’t.

Because if I’ve learned anything else in my research and in my own experimenting with spirituality, it is that love is all around us, and humans will innately create “family” anywhere they go.

When we find that family, the people who embrace us with true love, true acceptance, true support, true celebration—it is our duty to cultivate those relationships and to hold them with tenderness.

And, spoiler alert: in those connections, that’s where you’ll find God, too. Even if a church or set of laws is nowhere to be found. 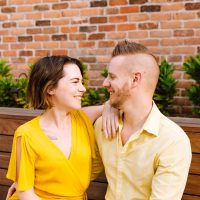 Tiffani Purdy is a Human Design Expert, NLP Practitioner, and work-at-home mom. She helps families learn to use Human Design as a tool for creating more understanding and impr… Read full bio

A New Definition of “God” that will Change how you Think about Religion. Why I Left Evangelicalism—but Not the Church.
See relevant Elephant Video