Why we Ignore those Red Flags & jump right into Terrible Relationships.

From what I’ve noticed, the line between fantasy and reality in love is a tough one to differentiate for some women, myself included.

Hell, I might actually win the lifetime achievement award in this category.

I’m a Pisces, which makes me prone to delusion, thanks to Neptune, if you believe in that sort of thing. That’s why we make such great artists and musicians—we live in fantasyland half the time.

But I never dreamed I’d been keeping connection at bay for most of my life—until last week, that is.

Thanks to a nurturing therapist, named Natalia, I was starting to figure out why I consistently made such poor choices in partners. And while processing yet another breakup from an incredibly unavailable man, a harsh reality struck.

I thought this one was different because we both wanted an unconventional relationship, but “relationship” was the key word. I wanted one and he didn’t.

In my heartbroken stupor, I lay on the couch staring up at the knotty pine ceiling in my 1930s-style Lake Tahoe cabin, trying to make sense of it all. The feeling was similar to shock, or out-of-body when you’re hovering above yourself, observing.

That’s when something snapped. Maybe my mind had finally cracked from too much pain, but ironically, the light started to seep in.

It was suddenly clear that my love life had been placed on hold in exchange for fantasies.

Years, hell, decades of my life have been spent in my head rather than in the present moment.

As a kid, I’d take walks in the evening while the hot Sacramento air started to cool down and the sky turned orange. My trusted yellow lab, Hap, and basset hound, Ripper, were always by my side listening as I told them over and over the story of how I met Andre Agassi at a tennis tournament in Las Vegas, and we fell madly in love and got married.

It seemed so real, always causing a rush of endorphins and making me feel better about myself. I was an actress after all, and my everyday life was awkward and painful like so many adolescent girls.

I went from my single dad giving me an Annie perm in the sixth grade to a mouth filled with metal braces by the time my hair recovered in the eighth. I never stood a chance with any boys who weren’t gay, and still pretending to be straight because we lived in a hick town, until I was about 16.

The fantasies made the pain of being unwanted bearable. None of my faults ever caused Andre to reject me. He never hurt my feelings or said mean things about my hairy legs and awkward hairdos. Thankfully, he didn’t marry Brooke Shields until I had moved on.

Fast-forward a few decades to lying on that couch, when it all came crashing into my consciousness that I’m still using delusion to comfort me in hard times and blocking true connection because real life can’t compete with the ideals I’ve created in my brain.

For 15 years, I adored a goofy bass player in a band I followed around the country. The rhythm he lays down made me feel more connected to the divine than anything else, and my idolization of him was frequently confused with love. When it got boring with a boyfriend, I’d simply return to fantasyland and, up until about 10 years ago, still told stories when I walked my dogs. The dogs and the men changed a couple times, but the moral of the story remained the same.

How could this be? I asked myself lying there all alone. How could I have blocked out real love all this time?

I mean, I’d had partners. I’d lived with men and shared my life with them. Could I really have been as unavailable to them as my recent suitors have been to me? The heaviness in my chest pressed down on me as my face pruned up and tears ran down my cheeks.

Talk about an epiphany you don’t ever want to have.

Rather than being the strong and independent woman I always fancied myself to be, I was just keeping everyone at a distance by comparing them to people who weren’t really there. And the men I have attracted recently are so unavailable that they may as well be a fantasy.

Did I just trade in my celebrity crushes for unobtainable people in real life? Men who love me in the moment, but refuse to share their hearts. Men who are mesmerized and chase me down until I agree to date them only to have them disappear. One even declared his love of me for 20 years, and then never called because mentally and emotionally he was too unstable to even try.

But sadly, I think I’d been doing the same thing my whole life, only in a different disguise.

We were all just keeping love out of reach because of the terror of being hurt again. It’s easier to be guarded than to risk being abandoned like I felt when my parents divorced and had no idea what to do with me.

It’s hard to explain what it feels like to wake up from a 40-year trance. My brain was fuzzy as the pieces flooded back of all the times I’d used delusion to protect my delicate psyche. How often I’d ignore red flags in the throes of new love because I thought I could feel the real person inside of the walls they put up. How I unknowingly played the same boundary game when people who could actually love me came along.

Natalia said that fantasies are healthy when used correctly. They offer a vibrance and energy that one can feed off of for creativity. They did, after all, give me the imagination to create a world 200 years in the future and write an entire book and screenplay about it. They protected me when my little heart would have just exploded from sadness when the boy I loved since the third grade refused to kiss me during spin the bottle in junior high. My fantasies of the musician led me to my best friends in the entire world chasing the music around.

The problem was, I put real life and love on hold because I was waiting for a man to feel as good as the stories I’d created.

I grew so accustomed to protecting myself by living in my head that I didn’t notice life was rushing by. Choosing men who don’t want partnership is the same as daydreaming about a rock star or tennis player. And as I wake from this long slumber, a real partner is sounding so much better than the fleeting moments I’ve gotten to spend with a man who will never share his life with me because he’s too afraid of connection. I can dance and dream and create with fantasies, but I don’t need to waste my precious energy on men who can’t get past their own shadows.

Now that I’d finally glimpsed my own, it was jarring. I’d been living a lie without any awareness of it. All this time, begging men who are incapable of getting close for crumbs, while subconsciously choosing them because they would never challenge me to engage in true intimacy.

It’s a lot to take in, sad, and yet liberating. Thankfully, I’m also learning to practice self-love, so I can take myself by the hand and at least start to believe that there’s a better way. 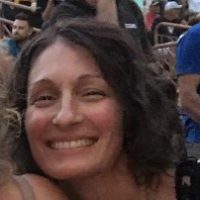 Monica Evans is a dog-loving, music fanatic who lives in the mountains of Lake Tahoe with her sidekick, Batman, a rescue pup that weighs in at eight pounds. She never imagined… Read full bio