America’s response to 9/11 created a state of national post-traumatic stress.

The government of the day reacted instead of responded to the event, a hallmark of fight, flight, or freeze.

The identification and mobilization of retribution toward perceived perpetrators galvanized and set in motion our dysfunctional response to that terrible day.

The green, yellow, and red alerts by the Department of Homeland Security fed into the state of powerless vigilance, which is characteristic of unresolved trauma.

There was very little in the way of a nationally-led and effective grief processing and movement toward closure—just a slow and inexorable escalation of fear, with our fight or flight reaction left unchecked. Our actions and approach may have felt “right”and instinctive because the response to trauma is tied to our implicit memory.

The events of 9/11 plunged the United States into an attempt to identify and eliminate any and all threats. The problem is that when we feel under threat, we begin to see more and more of them. This response is a natural physiological process mediated by the lower and middle parts of our brain, and is common to all animals. This underlying sense of imminent threat overrides the higher cognitive centers of the brain and will even enlist these cortical areas to justify and bolster the actions of the lower brain.

The consequences to society of this low-grade fear won’t go away until we recognize and deeply address the unresolved grief and pain at the heart of our country. This is a personal and a national process.

We need to look at our problems with mass murder, drug use, poverty, and child abuse from the perspective of a national post-traumatic stress disorder.

We need to examine our assumed role as “world cop.”

We need to work to unpack and disentangle what we mean by “us” and “them.”

The direction that politics is going vis a vis the election of Donald Trump into the presidency is an indirect result of this less-than-stellar response to 9/11. When trauma is unresolved, our tendency can also be to re-enact it. This unconscious impulse is at the root of Trump’s popularity.

His rise to power is us nationally and unconsciously saying:

“I’m afraid and I don’t know what to do about this feeling. I can’t face my own own fear and anguish so I’m looking for a target to pin it on. If that doesn’t work, I’ll create the painful situation again to see if I can resolve it this time.”

None of this is conscious or deliberate. These words are a metaphor for what trauma does to our brain and our understanding of our environment in terms of perceived threat.

There really are people out there who want to get us. But the irony is that we are actually safer when we can personally and nationally down-regulate and heal our stress and grief. True threats are easier to identify when we come from a place of authentic power and we aren’t frantically seeing them everywhere.

We can think and formulate rational plans when our higher brain functions aren’t being unconsciously overridden by our instinctual brain.
How the hell are we going to do this? There are at least 327,200,000 ways and each of them matters.

I recall that particular September 11th, which used to be just like any other. I turned on the TV to do a Rodney Yee Yoga DVD, and before I could start it, I saw the image of smoke coming out of one of the towers on the emergency news program. It seemed so unbelievable that a plane had flown into it. Then as I watched, like so many of us did, the second plane flew toward the second tower, and I’ll never forget the little course correction the pilot did at the last minute to make sure it went directly into it.

I remember turning to my partner at the time and saying, “The world will never be the same.”

The horror of the act has led me to love more deeply as a response to the ignorance and hate that prompted such a despicable act. Hate will not kill hate, only love does that.

I watch my reactions closely to see if they are driven by knee-jerk instinctive reactions or if I am consciously living my personal value of kindness. I often fail, but I’m more aware all the time.

I ensure that I’m not using blame like I would an opioid: numbing my own pain and darkness by turning on others. I still want to numb my pain sometimes, but I don’t blame much.

I step into my responsibility as a man, not hiding behind the dangerous veneer of naiveté when life throws something painful and challenging at me—it’s an ongoing process of maturing.

When I’m in an interaction with someone who rubs me the wrong way, has different political ideas, or exhibits behavior that I deem harmful or negative, I remind myself “Everyone has a story that will break your heart.” If I could know that person’s pain, I would discover their humanity and understand them better, even if I don’t agree with them.

It is my belief that with self-reflection and conscious responding we can help to heal the wounds of our collective past and meet our national and personal challenges in a way that evolves the pain, not perpetuates it. 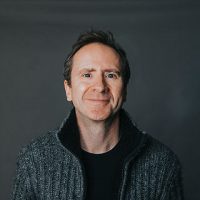 Anthony McMorran discovered yoga philosophy in the late 70s with a copy of The Upanishads that he found at a bookstore in his hometown of Vancouver, British Columbia. Around t… Read full bio

Remembering 9/11 by Not Forgetting 9/12. This is one story of 9/11. A human story. ~ Arslan Chaudhary How it felt to Bear Witness days after the 9/11 Attack.
See relevant Elephant Video