Justin Trudeau’s history of Blackface & why we’re Responding too Harshly. 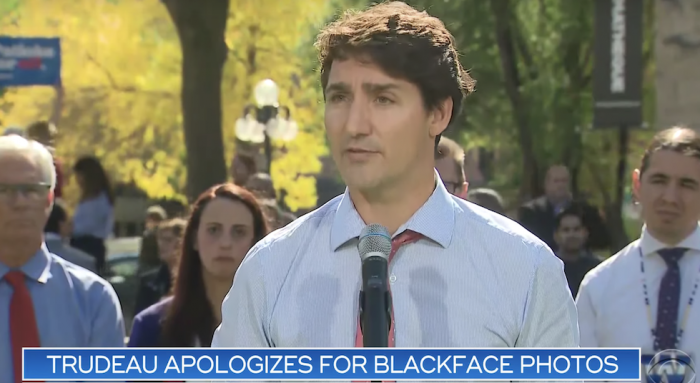 As I teenager and college student, so says my mother, I was little to no trouble to her and my father.

I went to class, did my homework, treated the girls I dated with respect, and did the same with my parents and other adults.

But I’m sure there were times when my words or conduct might have been inappropriate or at least misconstrued as such.

So the latest news about Prime Minister Justin Trudeau’s appearance in brown-face, as well as many other similar instances where people’s past have come back to haunt them, has me trying to sort my thoughts out about I should respond to—rather than simply pillory—the past conduct of public figures. Maybe you’ve thought about the same thing.

I suppose we all have skeletons in our closet of a sort. We said or did foolish things as young men and women—things we aren’t proud of today—things we might even profusely regret.

Yet thoughts of our own past misdeeds don’t seem to mean much when we are faced with someone else’s conduct.

But Canadians and the world are now contemplating the conduct of then 29-year-old Justin Trudeau’s appearance at an “Arabian Nights”-themed gala. Two other instances of him appearing this way also seem to have occurred. One when he was in his teens, the other in his early 20s. As one writer put it, such revelations are a blow to the Trudeau “brand” of tolerance and compassion.

But from a Buddhist perspective, what should we make of this?

First, it seems wise to respond with compassion—especially for those people of color wounded by Trudeau’s conduct, but perhaps even for Trudeau himself. To be sure, at 29, Trudeau was old enough—even for a male whose prefrontal cortex has just reached maturity—to have known better. Still, it seems that compassion is what should mark us when we encounter such situations.

Even the foolish and insensitive comments Kevin Hart has made about gay people, I think, should be met with compassion—again, for those he wounded and for Hart today. I don’t think there’s much evidence to suggest Hart is truly homophobic. And he’s made it clear he was in the wrong. Smart, kind, talented, well-intentioned people do stupid stuff at some point their lives, for which we would all hope to be forgiven. Perhaps we can forgive them as we would like to be forgiven.

Second, I think we have to respond to these situations in context. And, while it’s difficult to judge anyone’s intentions, I do think we can consider such behavior in the context of someone’s age and let’s call it their life’s body of work with regard to whatever offenses they may have committed.

While Hart’s remarks were offensive to many, he does makes his living making people laugh. That’s not a defense of him, just context.

David Duke, however, a former Louisiana state representative, past Grand Wizard of the KKK, has a completely different body of work. Thus, the context in which we would consider his conduct and words—past or present—is different than Trudeau or Hart’s.

Finally, I think we can see these situations as calling for all of us to reminder to heed the call to right speech and right action. The sword of celebrity clears many a path of opportunity for figures like Trudeau and Hart. But we—like them—must realize that sword can inflict mortal wounds on the one who wields it. Their examples can help us reflect on our own speech and actions and ask ourselves if we are holding faithfully these principles.

The indiscretions or youthful foolishness—and sometimes as an adult—I’ve committed have mostly been without life-changing consequences. I’m grateful for that and for the fact there is no photographic or video evidence of it that I’m aware of.

Calling public figures to account for their deeds and words, I think, is appropriate. Perhaps not as vociferously as we sometimes do, though.

Trudeau’s entire political career has been staked on compassion and tolerance—so his appearance in brown-face (again, stupid and insensitive) doesn’t align with his body of work. And I’m not even sure we can suggest Trudeau is just a hypocrite. That’s just too easy.

If everything on our scale of outrage is a 10, then, I fear, nothing is. Without recognizing that, we risk diluting our efforts to combat genuine homophobia, sexism, and racism—something none of us can afford to do.