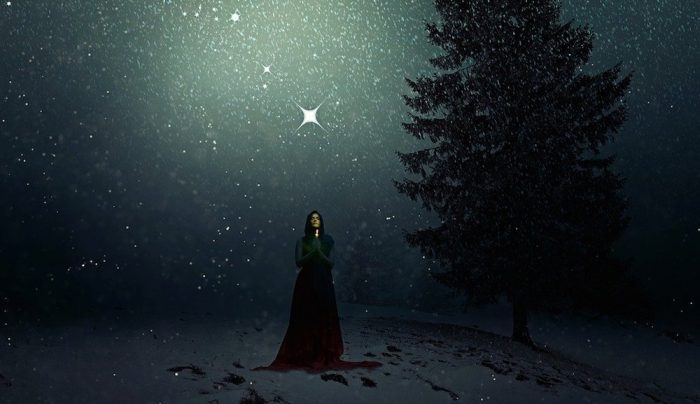 We are a light-loving society, and—though it has gotten a rather bad reputation—we need darkness, too.

One of the things that I love about pagan rituals, and traditions, is that they honor death and darkness as much as they honor birth and the light. Nature is both.

Our unconscious is still deeply connected to the seasons and nature. Darkness nurtures. Nothing grows into the light that was not first steeped in darkness. Even sweet little baby Jesus—light of the world to so many—spent nine full months forming in the darkness of his mother’s sacred womb.

In the northern hemisphere, life slumbers beneath the soil. Leaves have fallen from the trees, and, in many places, snow blankets the ground. Instinctually, our bodies still feel this deep primal pull of the earth. Amidst the holiday hustle and bustle, many of us crave solitude and time to reflect and dream this time of year.

We now move toward longer days, but winter lingers as the New Year approaches. This is a time to nurture ourselves, to turn inward, to tend to the quietude of our soul’s secret longings and pains. We may be called to rest more, to sit with a warm mug and a book by a fire. We may be called to journal, and, if given the chance, we may experience more dreams.

Darkness is fertile ground for our creativity.

Most of our modern rituals have roots in paganism. Early Christian imperialism tried to wipe the nature-loving savages’ ways from the new and domineering culture. They came to find that instead of obliterating many of the traditions that the pastoral peoples lived by, it was easier to incorporate them into the new religion, Christianity.

Winter Solstice, or Sol Invictus, as the Romans called it, is the shortest day of the year. It is the day the sun rises later and disappears sooner than any other day. Pagan calendars set Samhain—our modern Halloween—as the start of winter, making Solstice winter’s midpoint. The sinking of the light lower and lower on the horizon coincided with the winding down of the year, and Solstice would be a time to gather, share in the harvest, and summon the light to return.

Solstice, usually celebrated around the 21st of December, got meshed with Christ’s birth, the dawning of a new era. But you may not know, December 25th was not officially Jesus’s birthday until Roman emperor Constantine proclaimed it so in 325 AD, at the Council of Nicea. Constantine was himself pagan until being baptized on his deathbed.

Our beloved Christmas tree tradition (now commonly associated with celebrating Christ’s birth) was shunned by puritans as heathenry, in the New World. The tradition is said to have originated from medieval Germany, but has roots going back to Rome. The bringing of live pine boughs into the home was part of the celebration of Saturnalia (in honor of the god Saturn, whose feast days were December 17th to 23rd). We can go back even further and find Babylonian traditions in which they would honor the goddess Astarte by bringing living trees into their homes on Solstice.

This time of year is steeped in goddess lore, for darkness is the realm of the holy feminine. In the darkness of the womb we are formed, in darkness seeds germinate, and in darkness we dream. The goddess Epona—bringer of dreams and nightmares—horse maiden, goddess of fertility, just celebrated her feast day on December the 18th.

This time of year blends dreams and fantasy with reality, seamlessly. We find ourselves in a dance of enchantment with long-held rituals that sing through our bones—passed down through our ancestors—birthed from the very movement of the stars and our own primal relationship to light and dark.

Santa, yet another pagan figure—also known as Saint Nick— is an altruistic character who brings gifts for children. In other Santa legends, he is a mushroom-eating shaman—hell, some legends say he is actually a mushroom, himself! In perhaps his oldest role, he is connected to Yule as the god Woden, leader of the wild hunt, a noble procession of dead making their way into the afterlife. Curiously, Epona was also thought to act as a guide for the dead.

Death lingers in the darkened corners of our family get-togethers. Places where loved ones once sat—empty. Grief is as much of a part of this time of year as is celebration, and rituals that honor both must be kept. We can set time aside to hold space for lost loved ones, and even create rituals to acknowledge aspects of ourselves that need to be mourned.

Gathering around the lights on the darkest days—around fires and sharing food and stories, calling the light home, decorating—is something our ancestors did instinctively, and is something we still do today.

We see lights draped on houses, lights draped on trees. My quiet little town boasts the best main street light display in the state of Montana. Gold, green, red, and silver, the giant glowing holiday spiders, dangle over all the downtown intersections of main street. People gather in the streets when the city first raises them—it’s tradition.

We need not keep all the traditions from which we came. As we mature, we get to make our own traditions around our core values. We also get to seed the coming year with intentions for what is meaningful for us, and know that those seeds that germinate in darkness will thrive to the degree that we tend to them.

We feel the end of the year unraveling—and more than a year, a whole decade. Father time asks, “What have you done with the last 10 years of your lives—and what will you do with the next?”

This is a time for commitment, for honoring where we have come from, who and what we hope to become, as well as what we will bring forth into the world, through our care and creativity.

This is a time to tune into the internal and call forth our own light, even as we sink gratefully into the nurturing arms of darkness.

Pagan Prayers for Everyone: 5 Easy Ways to Connect with our Ancestors & the Earth. 5 Healing Ways to Reflect on 2019 (& Prepare for the New Year). Why Christmas is not just for Christians: 10 “Christmas” Traditions that are Actually Pagan.
See relevant Elephant Video