“What if he’s Turning into a Butterfly?”—Thoughts on Grief as I Witnessed my Father’s Passing. 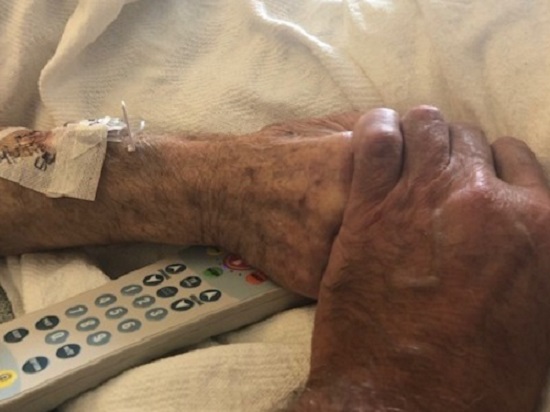 I sat by my father’s deathbed watching him labor for breath, wondering which one would be his last.

A series of strokes had robbed him of his ability to swallow or communicate. He hadn’t eaten anything in three days and was wasting away before my eyes. His wiry little body, which he had taken such good care of during his life, twisted and writhed on the bed as if trying to shed a set of ill-fitting clothes.

The wonderful hospice nurses were doing all they could to make him comfortable, coming into the room every few hours to squirt meds into his gaping mouth. But I could see the suffering in his eyes. The fear.

Watching a parent die is the loneliest feeling in the world. My father had always been there for me. He was the Great Fixer, helping me overcome so many of life’s problems, from financing college and cars and houses, to getting me help when I was going through my deepest, darkest depressions. And now, in his time of need, I couldn’t help him. I felt so helpless, so useless. All I could do was massage his bony shoulders as he groaned in pain and whisper in his ear how much I loved him.

All of my hard-won learnings over the years in my journey to emotional peace—lessons about the power of acceptance and witnessing and non-attachment—were out the window. The fact was, I was deeply attached to this man who had had such a profound impact on my life and made me who I was. How could I let him go?

Then, at one point, as I was sitting there in the hospice room, I thought of a saying that has been pinned to my refrigerator for years:

“Just when the caterpillar thought the world was over, it turned into a butterfly.”

I looked at my father in bed, his body ravaged by age and sickness, a shell of the man who had always been a giant to me, and I thought: What if he is turning into a butterfly?

What if what I am witnessing right now is equivalent to the caterpillar shedding its used-up husk and becoming a monarch butterfly?

What if the suffering he was going through at that moment was necessary for his spirit to fly free in a new, even more beautiful form? To take on multi-colored wings? To blow in the wind? To taste nectar? To experience things he didn’t experience in this human life?

This thought didn’t exactly square with the beliefs I had been taught in my Catholic upbringing. It was more aligned, I suppose, with the Hindu beliefs in reincarnation. But I wasn’t thinking about religious doctrine as I sat there by my father’s deathbed. I was looking for comfort, for hope, for something to help me get through the agony of letting him go, and the thought of what I was witnessing as a metamorphosis helped me more than any words written in a catechism book.

My father’s 86-year-old body was all used up. It could do him no more good. He was shedding that mortal coil so that his spirit could fly free to dance in the wind. I could not walk with him through this metamorphosis—he had to do it alone. But I could be joyful that something wonderful awaited him when this interim process was over.

Birth and death are both passings from one state to another. Like all transitions, they involve discomfort and pain. The fetus doesn’t want to leave the warm, soothing environment of its mother’s womb, where its every need is being taken care of. But without making the passage, it would not get to experience the joys that life can bring.

Eighty or 90 years later, the aged adult doesn’t want to leave this life and body it has grown accustomed to and pass into another uncertain existence. It can only go on faith that this new state of being will be as wonderful as the past. Maybe even more so. Isn’t this what faith is all about?

When finally my father breathed his last breath, after seven days in hospice, I saw in my mind’s eye the reborn butterfly of his spirit lifting from his used-up body and taking flight. It helped me immensely. I felt relief. I felt happy for his liberation.

The week after my father’s funeral, I was up at the cabin I was building in the Endless Mountains of Pennsylvania. It had been a long-held dream of mine, to have a house in the mountains, and now it was finally coming true.

It was a glorious, late September afternoon, sunny and warm with a light breeze blowing. I was standing on the deck, enjoying the view, thinking of my father, and wishing he could be here to see this. He’d always loved the mountains and the outdoors. I had hoped to get him up here to see the place before he was gone, but it wasn’t meant to be.

As I was thinking sadly on this, a monarch butterfly came in from the field and swirled in the air in front of me. It was beautiful: brilliant orange and black, floating up and down in the breeze like a scrap of gorgeous Oriental paper. It stayed by the deck for a few minutes before fluttering away and joining other butterflies out in the field.

It is January now in Pennsylvania. The cabin is finished. My father is wintering down in the mountains of Mexico, a place he never had a chance to visit in his human life, waiting for the return of spring to come back north and visit us again. 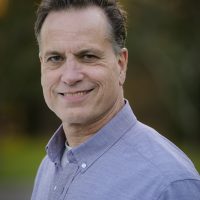 James Kerr led global communications and PR for a number of Fortune 500 tech companies before leaving the corporate world to pursue his passion for writing and storytelling. H… Read full bio

This is the Best Response I’ve ever Heard about How to Process Grief. 4 Things I Wish Someone Would Have Told Me After My Dad Died. How to Survive Grief after Losing a Parent.
See relevant Elephant Video