To Sit, Squat, or Stand: that is the Question. 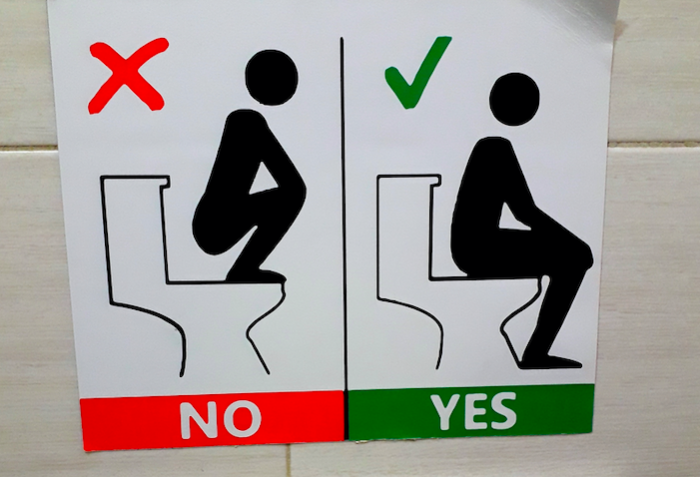 Author’s note: I thought to share this important debate now on how we should pee in hopes to offer some light-hearted relief from the 24-hour news cycle covering COVID-19.

Men: do you sit or stand to pee?

Were you taught that sitting to pee was for girls? Guess what: they may be onto something! Don’t worry, ladies, we will cover your urination options as well.

Recently, I had breakfast with a brilliant Ayurvedic practitioner and friend, Kashaypa Fisher, and somehow we got on the subject of whether it is healthier for men to pee standing or sitting—typical Ayurvedic breakfast conversation!

Kashaypa’s Ayurvedic teacher blamed many prostate issues men have today on the fact that they urinate standing, as opposed to squatting or at least sitting.

A week or so later, my son came home from college and asked if it is “wussy” for a guy to sit while he pees. In his dorm, everyone stands to pee (except him), and the toilets become disgusting. Complaining to his suitemates that the toilets are gross, they asked him why he sits to pee! He told them he grew up with two older sisters and a younger sister who would complain when the boys would miss the toilet or leave the seat up, so he learned to sit and pee.

After both these discussions, I was compelled to look into the ancient wisdom and modern science of the optimal body position during urination!

The History of Urodynamics

Terms like urodynamics, maximum urinary flow rate, void time, and post-void residual volume have been well-studied to determine the risk of LUTS (lower urinary tract symptoms). In English, this article is about whether it is better for men and women to sit, squat, or stand to urinate.

In a 1918 study of the tribal Arawaks of Brazil and British New Guinea, published in The American Journal of Anthropology, it was noted that both sexes squat to poo and pee, as well as eat.

In the British Journal of Medicine, during the English invasion of India, army doctors proclaimed traditional squatting toilets inferior to the more sophisticated “throne”-style toilets. New science in the field of defecation and micturation suggests they were wrong.

To squat during urination was also written about in The Origins of Buddhist Monastic Code in China. When a monk urinated, “they would roll up their clothes, squat close to the toilet, and not spit, blow nose, or talk.”

In Ayurveda, when downward-moving apana vata is engaged for urination or defecation, it is important for the mind—the prana vata—to be still, otherwise it will inhibit the complete downward efficiency of apana.

Our hunter-gatherer ancestors all squatted to pee and poo. When civilization marched on and toilets were invented, they mimicked how humans were evacuating for hundreds of thousands of years: squatting toilets.

Urination Position: The Science is In!

In a meta-analysis of over 11 studies performed between 1999-2012, 800 subjects from all over the world were evaluated to determine the benefits of sitting versus standing during urination.

Both healthy men and men with LUTS (Lower Urinary Tract Symptoms), such as BPH (benign prostatic hypertrophy), were evaluated.

They found significantly lower post-void residual volume (urine left to stagnate in the bladder) in the sitting position compared to standing. The maximum urinary flow rate (health and volume of urinary stream) increased and total voiding time (how long it took to fully empty the bladder) decreased. The results for healthy men were similar in sitting and standing positions, which suggests men should adopt the practice of sitting, since urinary tract and prostate health issues are extremely common in men over 50.

In another study, standing, sitting, and squatting flow urodynamics were measured in 61 men with LUTS. Squatting and standing demonstrated significantly greater urodynamics than sitting. The fact that these subjects were all used to squatting toilets may explain why sitting during urination was less efficient.

While women generally sit for both urination and defection, studies on women have found that sitting, instead of the traditional squatting, may make you prone to urological, gynecological, and colorectal disorders.

This news may come a little late as standing urinals for women are already in production.

For sure in a pinch, standing to pee for men and women should be made available, so women do not have to navigate disgusting public bathrooms. For events, check out the new LaPee, an open-air standing women’s portable urinal.

Don’t Suppress the Urge to Urinate

Habitually and often unconsciously, we commonly find ourselves suppressing natural urges, thinking nothing of it. According to Vāgbhata (one of the most influential classical writers of Ayurveda), suppressing natural biological and emotional urges is a major no-no. There are 14 natural urges that we should not suppress, but typically do every day.

For example, we have all learned how to hold our pee when stuck in a car or other situation where a bathroom is not to be found. When we think of life in the wild or in the animal kingdom, such suppression of natural urges would simply never happen.

Suppression of urination, flatus, and feces all cause downward-moving apana vata to stagnate and eventually move upward, causing a host of digestive, urinary, and reproductive health concerns.

Conclusion: How to Pee

Here are my peeing recommendations: Never suppress the urge to pee. If possible, sit or (better yet) squat to urinate. This will impact your urinary tract, reproductive, and prostate health, as well as maintain a cleaner bathroom.

Let us know how it goes!

The Perfect Pee. Why we should all do Kegels, according to Science.
See relevant Elephant Video