How to heal Childhood Trauma according to a Neuroscientist.

Simply put, if any human experiences trauma without the power of protecting themselves, especially at a young age, the nervous system will form connections that include the feelings felt during the experience together with the experiences and feelings of that context.

No wonder it is difficult to access a normal state of being, or certain states such as closeness and intimacy, if you start experiencing anger, sadness, rage, feelings of betrayal, fear, shame, aversion, and confusion at the same time.

The key here is that we have to rewire and replace those pathways—that is my life’s work. First, to understand the nervous system, and then to understand trauma, and how to heal these vital pathways so that people like me can enjoy all of life and feelings without getting stuck at low energy blocks.

Trauma was stuck in my body as stored energy—emotions hidden, memories hidden, feelings blocked. Anything that would endanger me to feel and remember the things I had learned to ignore, deny, block, act tough about, and hide; all that was vulnerable and hurtful. This was all subconscious, but it was running my life.

My unconscious thoughts, feelings, emotions, memories, reactions were the bosses of my life.

But as I said, I was unconscious of it all. I thought I was living my life, I thought I was the boss. I did all the right things. I did what was expected, and I did well in life. I tried my best to be social, even though I felt different. I felt like everyone else got out of life so much easier, like I was the only one with these weird memories from my painful childhood. I did my best to study, get a career, have a family, and do all the right things.

I succeeded, with a PhD in neuroscience, and two master’s degrees, a great career, looks, and health—a cosmopolitan, comfortable in most places on Earth. I pushed the edges of what is possible mentally for a human. But it wasn’t true healing yet; it was just me running away from the hurtful reality that I had been betrayed and abused.

That pain was something that I didn’t even understand existed. I had no access to it; meanwhile, it was running the show of my existence. All I knew was that I felt uneasy, restless, and I couldn’t relax easily—unconsciously, I was suffering.

I was devastated inside. I was furious inside. I was ashamed of myself and my past. I felt alone. I felt less than everyone else. But I compensated, as that is what we are supposed to do. I felt like I was a loser, so I compensated with achievements. I felt scared, so I acted strong. I felt insecure, so I did something to ensure I was better than others. I felt hurt, so I toughened up. I felt lonely, so I acted independent. I felt heartbroken, so I survived no matter what it took from me.

Someone suffering from trauma can experience aversion to intimacy that will ultimately lead to loneliness, lack of feel good hormones, lack of closeness, lack of trust, lack of well-being, and lack of life-force energy. I can’t think of many other examples that can destroy a human spirit as effectively. Our very life-force energy—sexual energy that normally runs freely in the nervous system driving us naturally close to other humans—is inhibited. It is inhibited because of the pain, shame, aversion, rage, fear, sadness, and confusion that would otherwise come to surface as well.

It is a coping and protective mechanism of the genius nervous system—to keep the victim alive and functioning.

Eventually, after years of work in unpacking my emotional experiences via life coaching, tantric experiences, and therapy, I experienced energy running freely through my energy field and within my pleasure pathways giving me endless pleasure and orgasms. Other people have religious experiences, and awakenings that open them to God.

I had to have a sexual awakening in which my nervous system was activated, and I was in bliss for hours, as if my body had had enough of my limitations and inhibitions as my autonomic nervous system took over in bliss. More about that awakening in another post, as it deserves a post of its own.

Our life-force energy, our sexual energy, is a portal for resetting the nervous system. It is also a healthy way to increase well-being, increasing feel-good hormones, and neurotransmitters (like oxytocin, the love hormone). My guess is that other neurotransmitters, even the ones that we don’t understand yet fully, are being released in such amounts that we get hallucinatory experiences with a capacity to heal the mind and soul connection, similar to plant medicines.

Overall, when sex is healthy, we feel relaxed, less pain, more mobility—all goals that we try to get from massage, exercise, and even acupuncture.

Embracing sexuality fully is healing, if approached and used for that purpose, but also damaging and re-traumatizing if used unprofessionally and unconsciously. But when the power of sexuality is held in a loving container, rewiring to bliss and pleasure will happen. 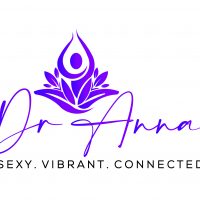 Dr. Anna Ri, a neuroscientist and an educator, teaches human potential, and the power of nervous system. She guides individuals from low energy in life force, and confusion to… Read full bio

A Perfect way to Activate your PNS (Parasympathetic Nervous System). Turn your Wounds into Resilience: How to Rewire your Nervous System after Trauma. When we get Triggered: How to Reprogram your Stress Response.
See relevant Elephant Video