42 Words from Thich Nhat Hanh that Changed the Way I think of Spiritual Teachers. 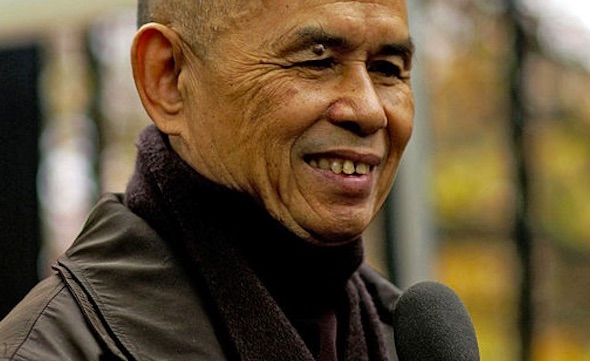 My business partner at the time and I had both read some of his books and were deeply impacted by them. So we decided to head to see him speak together.

Thich Nhat Hanh suggested a way of living and looking at life that was so gentle, loving, and kind that even I, the hard-nosed, Zen-practicing, braced entrepreneur I considered myself at that time couldn’t resist it. There’s a story where Thich Nhat Hanh visited the San Francisco Zen Center, where I was practicing for a few years then, once and when asked if he had any advice for the practitioners there said, “Maybe wake up a little later and smile a little more.”

That was funny and accurately describes the medicine I also desperately needed.

But I digress. The day I met him was (I think) in the summer or fall of 2013 for a Day of Mindfulness at the San Diego based Deerpark monastery. He gave a talk that day and the essence of what he said I’d like to summarize as follows: “If you’ve come here today just because you want to see me (that was definitely the only reason I was there!), then you are fools. I’m already old, I’m already weak. My life energy is barely around. If you put your faith in me, that’ll be disastrous, put it in yourselves.”

Now, that’s not exactly how he said it, and if someone is curious enough, I’m sure the talk was recorded and one could look up the exact words. But this is how the talk landed with me anyway. These words have been simmering in my mind and it seems to me that they are only falling into place now, years later. They are finally getting cooked!

For as long as I can remember, I had this urge inside to finally find a teacher, a mentor, a guide who would show me the way, give me the answers. This probably originally stemmed from my desire to have more connections with my own dad or to go back to the time I spent in my mom’s womb. But I think it also describes a deeper conundrum I am, and was, in, which is to finally find the answer I so long for in someone else. Of course, that day has never arrived yet and it’s been dawning on me lately, that maybe, it’s time to let that idea go.

As I was reading client applications one morning, someone said they suffer from “shiny object syndrome” and want to work on that. I never heard that term, but that describes my experience accurately. Maybe “shiny teacher syndrome” is a better fit here for me. You and me both friend! is what I thought while reading that.

Breaking out (again and again)

Then, a few months ago in late 2019, I left a monastery where I’d signed up to stay for about a month just 10 days in. I didn’t have a good connection with the teacher and the place. And so I left; I just walked out the door. I had never done anything like that. And in some way, that leaving was one of the most liberating moments of my life. To step into life and grab it with my own hands. To step out of the self-pitying and helplessness that finally someone else will solve all my problems for me, just like when I was an infant. And to stop enduring an experience that, by my own discernment, was just not a good match.

That was powerful for me. And so, so scary—it’s almost embarrassing in hindsight how scared I was of leaving. It reminded me of Alan Watts saying, “…and then it won’t go to your head too much when you discover that you’re god.” More ordinary and more powerful at the same time.

When I get to sit with people one-on-one, I sometimes pick up that same “please be my teacher” vibe from clients, which I’ve termed “guru-mode” when I bring it up to them. When this happens, I enjoy observing that because I know it only too well. I’ve been there so many times—the tempting promise that here is someone who finally will solve all my problems, what a relief that would be!

Of course, it never happens in that way, and intellectually most of the people I know would agree to that. And yet, since these patterns are so deeply wired into our nervous systems and bodies, most of us can’t help but unconsciously continue the search.

To have a chance to assist someone to break some layers of that pattern is something I deeply value. It is momentarily painful when one is coming to terms with the dis-appointment of the moment. It’s a moment of deep loss and sadness. And then, as that settles, there’s a great liberation that comes afterward—a chance for a moment of real truth, where you can connect to your body and really be with it.

As a client recently put it during a session, “For the first time, I don’t have the need to be anywhere else.” To me, that’s the most profound and at the same time ordinary experience we can wish for—to not want to be anywhere else other than here and now.

And finally, I like to remind myself that breaking this loop once, as powerful as it is, is just momentary. Whenever I have sworn myself to not make the same mistakes in romantic, friend, client, or teacher relationships where I’m chasing “shiny objects/people,” after a few months, whoops, there it is again!

What I’m learning is that this process is slow, and even though my choices seem to have “improved” over time, the same patterns reemerge—over and over again.

The only thing I can observe is changing is my own capacity for recognizing and working through that which is coming up.

~ the above is adapted from the original at leowid.com. 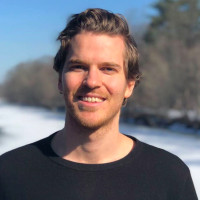 A Morbid but Liberating Lesson from Buddhist Monk Thich Nhat Hanh. 10 Powerful Thich Nhât Hańh Quotes to Quiet the Flawed Human in All of Us. Why we “Godjectify” Bad Gurus & Allow them to Hurt Others.
See relevant Elephant Video