An Honest AF Example of how a Straight, White Male can keep Checking his Privilege.

The long, slow learning curve of a man who thought he was reasonably enlightened.

I am, last I checked, a white, straight, cisgender man.

I’ve been privileged in other ways, too. I was lucky in that my parents taught me that racism (or any sort of prejudice) was an absolute moral abomination. That the world is an often confusing, nuanced place, but racism was a non-negotiable evil. And I’ve always tried my best to live my life with that at the forefront of my mind.

What I wasn’t taught, and what I’m still struggling to learn, is that racism oftentimes doesn’t openly present itself as such. It’s woven into our daily narratives and institutions so deftly and subtly that, given the blinders of my privilege, it takes a constant effort to be aware of it, let alone try to do my tiny bit to address it.

It wasn’t until the last few years that awareness, or lack thereof, of my privilege started to push itself from the back of my mind. I’ve become aware of my inherited privilege: inherited not just through my parents’ hard work, sacrifice, and love (though I was privileged by that, too), but by a society—hell, a world—that has been set up for millennia to give me advantages so varied and numerous, it’s impossible for me to even be aware of them all.

Even now, if I tried to write out a list naming every indignity I’ve been spared or advantage I’ve been given, I know there’d be a not inconsiderable litany of items I wouldn’t even be aware of that I’d left off.

When I find myself in times of trouble, Tobey Maguire comes to me.

Now, if I learned anything from the first “Spiderman” movie (and I like to think I did), it’s that 1) the idea that spiders, no matter how much you irradiate them, can give you superpowers is, tragically, not true, and, 2) with much power comes much responsibility.

And, through no doing of mine (Lord knows, no doing of mine), simply because I am a white, straight, cisgender man, I am endowed with certain powers. The power to not be looked at with suspicion by strangers on a subway platform, or routinely followed by store security while shopping. The power of not being called slurs by strangers (any insults I’ve been given were totally earned on my own, thank you very much). And that’s only some of the relatively minor stuff. Everyone knows this.

My point is, every time I think I’ve got my sense of white, straight privilege correctly calibrated, a situation or a friend will point out to me I really haven’t. I have to fully accept I won’t ever be able to fully grasp it.

But I do know that I have a moral obligation to try to keep learning, and to try my best, in my absolutely unimpressive and microscopic way, to make the world less like that before I check out. I need to read more, watch more, listen more. I need to interrogate myself for any unconscious acts of prejudice I’ve committed (and I have).

In other words, I’ve got a lot of work to do.

Do I think that, as a writer, I have a special responsibility to address these issues?

I’m a writer—playwright, predominantly—and I think my responsibility as a writer is to write as truthfully (“truthful” here meaning keeping as near to the fundamental truth of a subject rather than a documentary-like repetition of and fidelity to facts) and engagingly as I know how.

I try to write characters who, in many cases, need not be a specific race. When I do write a character who I feel must be a BIPOC, I tread extra carefully, because I’m aware that while, fundamentally, I believe people are people, of course, I’d be an idiot not to recognize such characters have experienced the world through a markedly different lens than I have.

Now, this may be true for white, straight, cisgender male characters, too, and like any half-way decent writer, I try to be mindful of that, too. Hell, we all see the world through slightly different lenses (hence, drama)—but I go the extra yard when dealing with any character who doesn’t fit those parameters. I have smart people I depend on to check in with to see if my writing feels right to them, and I always try to be highly sensitive and open to suggestions from the actors who portray them. This is not only the ethically right thing to do; it would be artistic suicide not to do so.

Defeated, not for the first time, by math.

There’s a mathematical term, “asymptotic,” which describes the concept of lines approaching ever closer but never touching.

That describes my approach to writing: knowing I’ll never quite get it right, at best. However, I’ve only recently come to think of my understanding of these issues that way. I’m sure I’ll never get there, but I can at least try to get nearer.

How? Well, um…okay. Fair question. Certainly, the days of feeling a smug sense of satisfaction at re-posting some clever meme or rebutting an argument with a stranger on Facebook will no longer suffice (frankly, it’s wearying on the soul, too). I’ve attended a couple of protests, and will attend more. I’m going to call my local government, where I’m more likely to bring about any change, and be a thorn in their side.

As I wrote earlier, I know that sort of entrenched division (actually, “divided” is too tidy and neutral a word for what’s happening in our culture right now—rupture is nearer the mark, a rupture that has left America in jagged little demographic piles) in our country won’t heal any time soon. Maybe not in my lifetime.

But that’s not a reason to get the converging arcs of justice and our society a little closer to touching. 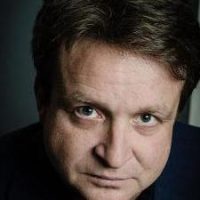 Jack Canfora is the winner of the 2016 Webby Award for Best Writing Online TV & Film for the pilot of a web series he co-wrote and co-created with Andrew Rein, The Small T… Read full bio

Celebrating Juneteenth: 19 Black Men who are Making the World a Better Place. My Blackness is Not a Trend.
See relevant Elephant Video