My Blackness is Not a Trend.

As a black woman, my goal has been to make yoga a more diverse and inclusive space.

However, to achieve this, I initially tried to be invisible—a bit of contradiction, I know, when you see what I share on social media.

One thing that allowed me to achieve this anonymity is my name: Donna Noble, which I share with a “Doctor Who” character. (A little bit of trivia for all the “Doctor Who” fans.)

I always saw myself as just little ole Donna trying to navigate the wellness space which was alien to me, coming from a corporate background. Who was I to challenge the status quo in an industry that was new to me?

Being a yoga teacher was never part of my career plan; in fact, back then, if you had suggested this is where I’d be one day, I would have laughed.

When I created Curvesomeyoga back in 2015, only a few people knew I was the innovator. Once again: hiding! It was while teaching at a yoga show on the International Day of Yoga where it became apparent I was doing my community an injustice by hiding.

I was scheduled to teach the last class of the day. The weather was gloomy, in typical British fashion, and I was convinced no one would stay to do my class.

I was so wrong…

I was blown away to see how many black yogis had come to support me. To be in a space where the majority of the practitioners looked like me was astounding—I still get goose pimples thinking about it. Unfortunately, I am still in the minority most of the time when teaching.

To be told that they had made the effort to come and take my class was deeply humbling.

It hasn’t been easy, but I try my best to show up for my community and anyone else who needs me to provide a safe, judgment-free space so that they too can be seen and acknowledged.

Blackness has always been a trend within mainstream culture and has a major influence in music, fashion industries…the list is endless. But, while the mainstream might have been enjoying our rhythm, it’s also been ignoring our blues.

The world of yoga appears to devoid of black yogis. At least, that’s the impression you get if you Google “yoga.” The images returned are invariably those of slim, white, pretzelesque bodies.

If you never saw someone who looks like you doing something, would you even consider doing it?  The likely answer is no. In the United Kingdom, only 56% of black women are doing the recommended 60 minutes of exercise per week recommended by the British Medical Examiner.

Is it surprising then when the wellness and fitness industry does not use diverse imagery in their campaigns? Adidas currently has an image celebrating International Day of Yoga showing three yogis. Take and look and let me know what is wrong.

Even in this current climate, we still have a long way to go.

The death of George Floyd and so many others recently have been shocking, not only for me but for tens of thousands of people around the world. Many of whom are finally coming together to show that Black Lives Matter and showing their support in ongoing worldwide protests.

I am hopeful that his death, and the deaths of so many others, won’t have been in vain and that their legacy is the changes we are beginning to see.

In recent weeks, my DMs have been inundated with support from my community, friends, and students old and new. I have received acknowledgement and thanks for the work that I have done and will continue to do. It has, at times, been overwhelming, but also so wonderful to see yogis coming together.

On the one hand, it is allowing me to be visible so that I can support my community especially now when they need me the most. To share information and educate those who want to help bring about change and make this world a better place for Black people, and everybody.

This has gone some way to restoring my faith in humanity and most importantly the yoga community.

But, sadly, I am also seeing that, for some, this is only performative action. Afraid to be called out on their obvious lack of diversity and inclusion in their well-being spaces, many have gone back to business as usual. They’re not in this for the long haul—only for as long as Black Lives Matter is just a trending hashtag.

I am grateful to those who are helping to amplify my voice.

I pray that this moment does not die—a little like the “me too” movement—for the real work starts now.

I would like to see allies who have power help to make these changes long and sustained.

I pray to see greater diversity within the wellness and fitness industries, not just on the mat but also in management positions where they can help effect deeper change.

The image of yoga is evolved so that the people who need it the most can experience it too.

Yoga is about union and community. Let’s start to make this a reality for everybody. 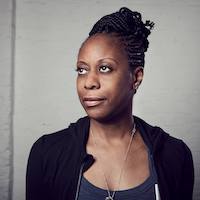 Yoga: How White People can Respect what was Never Theirs to Begin With. How I first started Practicing Yoga. ~ Jessamyn Stanley
See relevant Elephant Video