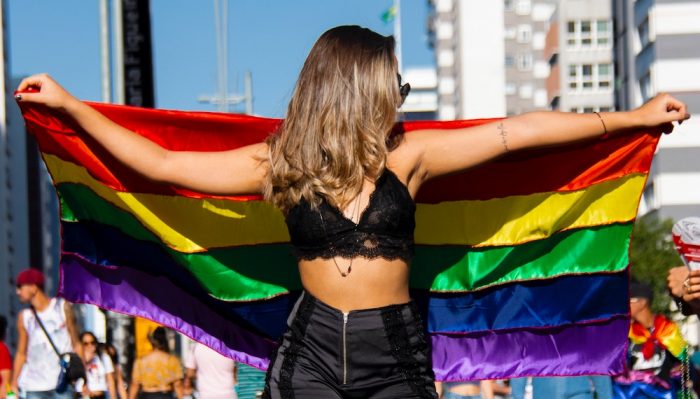 Being a straight-passing queer woman is a complicated, trying, confusing existence.

In some ways, it’s a privilege: I can act as a chameleon, blending into the privileged world of heterosexuality, spending days or months or years next to people without them having any idea that I am “different.”

I am cisgender, so I never experience the torment of living in a body I don’t identify with or the worry that comes from living out my gender identity.

I don’t fear for my safety or fear discrimination, like many queer people in the world do every day.

Whenever I want to, I can squeeze myself far enough into the happy, at-ease, blissful bubble of heterosexuality.

I’ve even had partners tell me that they “forget I’m not straight.”

Because, it seems, queerness is still something that confuses the heck out of straight people. “Bisexuality,” in particular, seems to baffle even aware, well-intentioned folks.

I put “bisexuality” in quotes because I don’t actually identify with that term. For some, it may feel right, or real, or true. But for me, it feels like just one more box that we’ve placed around people, because we as a world are not yet ready to embrace the reality that gender is not binary; sexuality is fluid; and humans are, well, human.

When I was in college, a friend reported back to me a conversation she had had with another friend of ours. It went a little something like this:

“Is Kelsey bi or straight?”

As soon as I heard about this conversation, my brain and heart lit up like a pride parade float.

Ever since that day, when people pause long enough to find out how I identify or who I am, I tell them just that:

“I identify as sexual.”

Yes, the term “pansexual” also exists, and if you insist on labels, then that’s probably the most accurate. But why? Why do I need to slap a label on such a crazy, complicated, intimate, confusing thing that sometimes I don’t even fully understand?

So, the point is, I’m sexual—not straight. But I pass as straight, and so I often feel like an undercover agent in the heterosexual world. It’s a bit like if, as a woman, I could be a fly on the wall in the infamous “locker room” conversations in which “boys will be boys” (or, in other words, boys will unabashedly let loose their most sexist, misogynistic, patriarchal views of the world and of women).

This brings me to my point, which is:

Straight people, your homophobia and heteronormativity is deafening.

And, straight people who are not necessarily inclined to heteronormativity and homophobia, your silence is deafening.

In my “gay-on-the-wall” experiences, I’ve witnessed both the blatant homophobia and the deafening silence of many straight individuals.

Last year, I got to know a woman (who didn’t know I wasn’t straight) who one day went on an unawarely homophobic rant about how gay men are more likely to get sick and be sick and make her sick. She also said that if a guy wears a nose ring and is “edgy,” he must not be straight.

I went to talk to some (straight) friends about it, expecting fury and sadness, and was instead met with:

“Well, I wasn’t there, so I don’t know what was said and don’t want to get involved.”

“Oh, she’s so nice. I’ve only had good experiences with her.”

“But she’s so friendly.”

This is just one of many experiences of the silence and turning-a-blind-eye of straight people in my life. In my social circles, at work, with strangers, I am often a witness to unashamed homophobia, to blissfully ignorant heteronormativity, to deafening silence.

With Black Lives Matter protests raging around the world, those of us who are white have been forced to confront our failures in showing up for the black community, in demanding justice, in using our privilege.

I’ve educated myself and called out racist language and behavior for years, and I’ve still done far from enough in all of those years to show up for black lives, hearts, minds, and bodies.

But I’m also disinterested in patting myself or any other white person on the back in this moment. Because the reality is, we wouldn’t be showing up in this way if it weren’t such a trend, if there weren’t so much social pressure to do so, if there weren’t black people working tirelessly and protesting tirelessly so that we won’t—we can’t—drown out their voices. I know this because we didn’t show up in this way before now. If we had, we wouldn’t be in this terrible pit of racial injustice.

So, on top of considering what I can do in this moment, I am reflecting on and planning how I will continue showing up, after the protests die down, after the news cycle moves on, after the white celebrities and influencers once again go silent on this issue.

This has also made me reflect on the other injustices of the world—the injustices that we turn a blind eye to if they don’t impact us directly—poverty, sexism, immigration, transphobia, animal rights, homophobia. We look the other way, we ignore, we deny, we stay earsplittingly silent.

Let’s all take this time—this time of BLM protests, of Pride Month—to ask ourselves if we’re being far too silent, if we’re failing to acknowledge our privilege or use it for good. Let’s challenge ourselves to show up in the fight against injustice, to not just speak up when it’s convenient or trendy or good for business.

Challenging racism and heteronormativity and sexism and homophobia is not always the “cool” thing to do—but maybe it’s just the right thing to do.

I am Black. This is what I Need (& what I Don’t) from White Allies. Mourning the death of Sarah Hegazy—Egyptian LGBT+ Activist. How I’m using my Passion to Find my Place in the Anti-Racism Movement. We’re No Better than Joe Exotic: Why We’re all “Tiger King” Hypocrites.
See relevant Elephant Video