Elijah McClain’s Last Words are Everything.

Reminder that the cops who killed #ElijahMcclain have not been arrested yet.. It’s our job to keep saying theirs names. Share, post, sign petitions, donate…Do anything you can in this fight for justice #Blacklivesmatter pic.twitter.com/MSsvaLo9ew

I have my ID right here.
My name is Elijah McClain.
That’s my house.
I am just going home.
I’m an introvert.
I’m just different.
That’s all.
I’m so sorry.
I don’t have a gun.
I don’t do that stuff.
I don’t do any fighting.
Why are you attacking me?
I don’t even kill flies!
I don’t eat meat!
But I don’t judge people, I don’t judge people who do eat meat.
Forgive me.
All I was trying to do was become better.
I will do it.
I will do anything.
Sacrifice my identity.
I’ll do it.
You are all phenomenal.
You are beautiful.
And I love you.
Try to forgive me.
I am a moody Gemini.
I’m sorry.
I am so sorry.
Ow, that really hurt.
You all are very strong.
Teamwork makes the dream work
(crying)
Oh I’m sorry
(vomiting)
I wasn’t trying to do that
I just can’t breathe correctly.”

Those were Elijah McClain’s last words.

They were recorded by police audio (the video apparently went missing) after Elijah was stopped for looking “suspicious.” He was put into a carotid chokehold, injected with ketamine, had a heart attack on the way to the hospital, and then died a few days later. At the age of 23. After walking home from the convenience store to buy iced tea.

Without his words, this would have been just another tragic case of police brutality. Yet another victim. More racist police officers. More coverups. More injustice. Something to feel angry about—but with so much to be angry about already, it’s hard to really feel it. There’s an uncomfortable numbness.

This time was different. I read Elijah’s words and the tears poured out of me uncontrollably. It cut me to the core. The voice of such a quiet, gentle, compassionate soul who, even while under attack—for no legitimate reason—was respectful, courteous, and forgiving to the end. It broke my heart.

How can you feel so much love and so much sadness for someone you’ve never met and didn’t know? I woke up the next morning feeling like I’d lost a friend or family member. The world felt a little colder, a little darker, a little more hopeless. I lost some of my optimism that things will get better. That people will wake up.

To witness the interaction through Elijah’s words, you realise just how dangerous it is to be judged “abnormal”—particularly as a Black man. Not only are the police shockingly ill-equipped to deal with people who think or behave slightly differently, but you risk not being seen or heard at all and reduced to less than human.

But it’s not just how Elijah died that makes his story powerful—it’s how he lived. Gandhi said we can judge the moral progress of a nation by how it treats its animals. I think the same can be said for humans. In a world where so many of us mainly take (myself included), Elijah was one of the few who actively gave.

That picture of him playing the violin in an animal shelter to stop them from feeling lonely; it’s never going to leave me. I’m in tears just thinking about it. The goodness he brought to the world. A roomful of stray cats, cooped up in the shelter, unwanted, unloved, scared, forgotten by most of us. But not by Elijah. He was there, smiling, playing his violin, doing the little he could to make their lives better.

I picture those sad, forgotten, lonely cats wondering where he’s gone, and the tears start all over. Who’s there to fill his shoes now? Are there other kind souls picking up where he left off? I know I’m not one of them. I don’t do anything to help my local community—that’s what I realised reading Elijah’s story. It hit me. Hard.

I don’t give my time. I give to charities but I’m not out in the world, supporting the causes I care most about. I’m not showing up—not like Elijah. He was actively trying to “become better.” Trying to make the world a better place. And even in his too-short 23 years, Elijah did make a difference.

Throughout his ordeal, Elijah met the policemen’s aggression with nothing but love and respect. “You are all phenomenal. You are beautiful. And I love you.” He offered up his humanity in the hope that they would remember theirs. “Try to forgive me. I am a moody Gemini. I’m sorry.” This, even though he’d done nothing wrong. And still, the police continued to choke Elijah until he passed out.

I can’t imagine how even the most hardened, most institutionalized individual can live with this on their conscience. To know that this man was pure love and they killed him. To know they looked at him but didn’t see him. To know they heard him but didn’t listen. Instead of seeing a young man who was fragile and caring, with emotional needs to be sensitive to, they saw a dangerous Black man who needed to be restrained.

It’s one of those stories that makes you want to give up on humanity. But there’s a quote in the Tao Te Ching that gives me some comfort:

If there’s purpose in everything, I’m asking myself, what good can come from this? It can’t just be sentencing the three police officers responsible. (Officers who,  to date,  are still working.) Elijah’s touched millions of people with how he lived his life. The example he set—without ever having any intention of being an example. Because of his death, we’ve had a glimpse into a life we’d otherwise never have known.

I imagine musicians everywhere picking up their phones and contacting their local shelters to volunteer their time. Maybe after this, instead of one quiet soul named Elijah consoling a roomful of abandoned animals, there will be thousands of people stepping up to console animals in shelters around the world. Wouldn’t that be the best legacy Elijah could leave? To change the script from victim to teacher. From powerless to powerful.

Maybe his story won’t be forgotten. Maybe the next time the police approach someone “suspicious,” they’ll hesitate—for just a second. They’ll remember it’s a human being in front of them, with hidden depths, unseen quirks, bad habits and good ones, and treat them accordingly. They’ll remember that person has a right to be here, that they’re needed in the world.

Elijah’s last words will stay with me forever. It’s the voice of a vulnerable, trusting young man who was terrified, in pain, and misunderstood. But he didn’t lash out. He spoke from the heart. He treated the policemen with love and forgiveness. 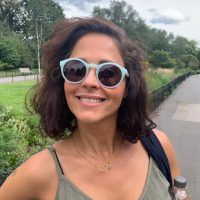 Leona Ford is a freelance copywriter, originally from Toronto and now living in London with her Brit husband, Sri Lankan street dog, and Siberian cat. As a copywriter, she has… Read full bio

What a Mental Health Nurse knows about Restraint. “Uncomfortable Conversations with a Black Man” with Matthew McConaughey. {Video} I am Black. This is what I Need (& what I Don’t) from White Allies.
See relevant Elephant Video