Happy Birthday Hemingway: A Look at his 10 Best Short Stories. 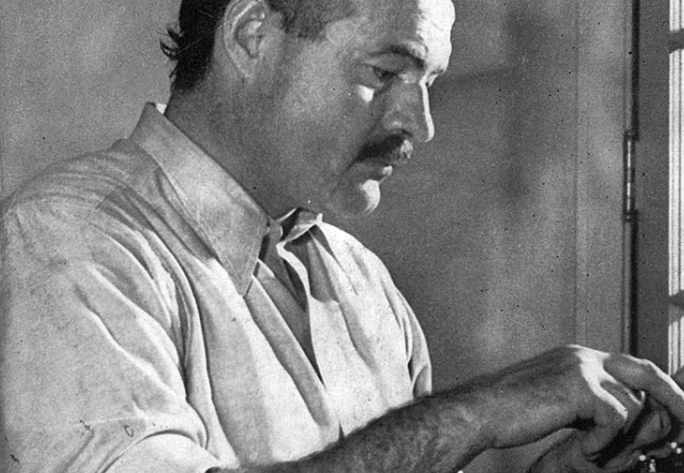 This is what set Ernest Hemingway apart from almost all writers before or since his time.

In a nutshell, when you see an iceberg from the surface of the sea, you are seeing not much more than an eighth of it—the rest is hidden from view. You know in your gut that it is there. Same for Hemingway’s incredibly economic style of writing. It was in his masterful short stories that this is illustrated best.

In not much more than five or six pages, Hemingway had the ability to transport us to the difficult existential questions, show us the darker side of humanity, and, sometimes, the complicated nature of male and female entanglements.

On July 21st we celebrate the birthday of this literary great. I think it might be useful to look at, what I consider, his 10 greatest short stories. This list is constructed of personal favorites that I came to know in an intensive graduate program held by the well-known Hemingway scholar H.R. Stoneback, decades ago.

They have never stopped inspiring me, and my hope is that they inspire you, as well.

“The Short Happy Life of Francis Macomber.” Published originally in, of all places, Cosmopolitan magazine, in 1936. In a few short pages, we watch the transformation and development of some complex characters, adultery, a coming of age, and murder. What’s not to love?

“A Clean, Well-Lighted Place.” According to James Joyce, this is the best short story that has ever been written. This piece takes an existential look at religion, life, and old age and might be one of Hemingway’s most anthologized works.

“The Snows of Kilimanjaro.” This was also published in 1936 in Esquire magazine. It has a premise similar to Ambrose Bierce’s “Occurrence at Owl Creek Bridge,” but it’s difficult not to feel as though Hemingway brought it to a whole other level.

“The End of Something.” This story, ostensibly about the romantic breakup of two young people, explores how time and place can serve to highlight a narrative. Hemingway reveals a different element with a few lines at the end, as he is wont to do at times, and leaves the reader with much to contemplate.

“A Cat Out in the Rain.” One of the greatest illustrations of the “iceberg theory,” this story doesn’t give much in the way of action, but, in the words of The New York Times, shows “a lifetime of discontent, of looking outside for some unknown fulfillment…” It definitely has an autobiographical side to it, as well. It has been theorized that a similar incident happened between Hemingway and his first wife, Hadley, when they went to visit Ezra Pound in 1923.

“The Capital of the World.” There are political overtones, bullfighting stories, and human frailty included in this story—but it is the sad last paragraph that leaves the reader changed at the finish. It’d be a disservice to explain any more than that. This is a must-read.

“Fifty Grand.” Critics have always tried to figure out what real-life events may have inspired this famous boxing story, but as a student of Hemingway, I have never really been interested in that part of it. The unfolding of the story, and how it all resolves, has always captured my imagination.

“Indian Camp.” This story was published early in Hemingway’s career and immediately caught the attention of critics who recognized, right away, that this writer was going to be important. The style, the use of the declarative sentence, and the economy of language has been, at times, described as “crisp” and “invigorating,” and although this story could never be published in today’s political climate, it remains influential enough for any serious writer to look into.

“Hills Like White Elephants.” This is Hemingway doing what he has always done best: confounding the reader and sending many off to theorize what the other seven-eighths of the iceberg might mean. It might be a story about a girl going off to get an abortion, although this is never discussed in the actual text—only in the vast literary criticism that references the story.

“The Three Day Blow.” I’ve always found it interesting to read this after reading “The End of Something,” because the stories are so closely linked. There is quite a bit of dialogue between the two protagonists, Nick and Bill, but it is an almost perfect counterpoint to its companion piece. In other words, everything you think is true after one seems false after the other. This, of course, is what makes Hemingway’s forays into existentialism so satisfying.