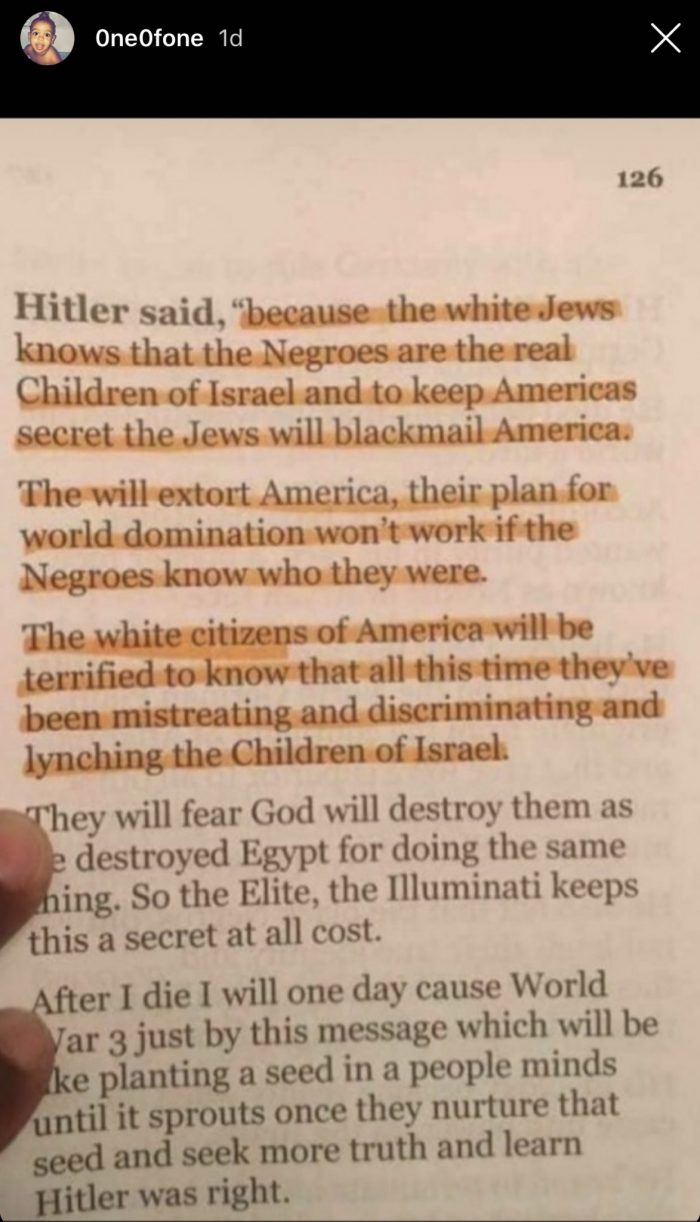 Update: Charles Barkley and Kareem call out the lack of outrage.

“Recent incidents of anti-Semitic tweets and posts from sports and entertainment celebrities are a very troubling omen for the future of the Black Lives Matter movement, but so too is the shocking lack of massive indignation. Given the New Woke-fulness in Hollywood and the sports world, we expected more passionate public outrage. What we got was a shrug of meh-rage.”

Farrakhan is, for the record, a raging anti-Semite. The Southern Poverty Law Center has branded Farrakhan’s Nation of Islam as a hate group for “its theology of innate black superiority over whites and the deeply racist, antisemitic and anti-LGBT rhetoric.” In a 1984 speech broadcast over Chicago radio, he called Hitler “a very great man”; during a 1985 speech at New York City’s Madison Square Garden, he proclaimed of Jews, “And don’t you forget, when it’s God who puts you in the ovens, it’s forever!”; in a 2006 speech, he exclaimed, “These false Jews promote the filth of Hollywood that is seeding the American people and the people of the world, and bringing you down in moral strength… It’s the wicked Jews, the false Jews, that are promoting lesbianism, homosexuality. It’s the wicked Jews, false Jews, that make it a crime for you to preach the word of God, then they call you homophobic!” In 2018, at a speech at Mosque Maryam in Chicago, he accused Jews of inventing anal sex and promoting pedophilia. And just last year, after being banned by Facebook for hate speech, he claimed he didn’t hate Jews—then in the very next breath called them “Satanic.” ~ read the rest at the Daily Beast. It’s good. I mean, really, really bad.

Shame on the Hollywood Reporter who obviously gave my brother Kareem 30 pieces of silver to cut us down without even a phone call. https://t.co/XRXPu0NRBW

Ice Cube going at Kareem in the way he did was by far the worst of them IMO. Kareem and Russell should be untouchables when it comes to social justice. Everyone should just shut their damn mouth and listen when they speak. Ice Cube is from LA and knows all about Kareem so ignorance is no excuse. His comment was anti-Semitic, disrespectful, and frankly quite racist. I don’t care that Cube is black – the idea that Kareem can’t think for himself and is being manipulated by others would be considered wildly racist if said by a white person and it shouldn’t be treated any differently coming from him.

His 30 pieces of silver comment was bad. Fuck him. People like him try to box other black people into monolithic group think

For those unaware, 30 pieces of silver is what the Jewish leaders were said to have paid Judas in exchange for betraying Jesus. It’s a wildly anti-Semitic thing to say.

Hard to think of a more classic anti-Semitic trope than that. It’s well outside of the “perhaps he didn’t know what he was saying” realm. Ironically, it’s the same shit white supremacists bring up, including several of the leaders who were interviewed when they marched on Charlottesville.

Doesn’t surprise me that Kareem is the only one speaking up. I’m glad that Barkley is using his platform to criticize this. We can’t pretend to want equality and then do the same shit trump country is doing.

And maybe someone can shed some light as to why more aren’t speaking up.

Sucks. Really liked his recent commentary, but I guess he wasnt really including me when he said those things.

Oh dude, here is Killer Mike literally breaking down in tears talking about his love for him in the first 45 seconds

I’ve written about how I bristle whenever I’m called “White,” before. I am white, in terms of privilege. But I’m also Jewish.

The other day, for a different reason, Jane Elliott schooled me on that subject, too, correcting me almost angrily whenever I referred to myself as “white.”

And then it happens, again, in the midst of this BLM moment, a moment this nation needs. We need to wake up from racism. We need to educate ourselves.

This is not to equate hate. This is not to say that “All Lives Matter,” but that there are several houses on fire, on this block that is our society.

An NFL player just posted an anti-Semitic quote attributed to Hitler. There’s controversy, some defending him, some criticizing…and he’s threatened with, perhaps, a one-game suspension.

The outcry against Drew Brees, for that tepid fake-patriotic support for standing, a month back, was unified and instant, as it should be, though we can also take care to educate those who are ignorant.


“Skip and Shannon just did a segment on the incident where Shannon says it was ‘taken out of context’ and that he believes DeSean has no hate in his heart. Warning him to ‘be careful’ because people are hyper sensitive in 2020.’ Wow.”

ESPN showed an apology from DeSean after the Eagles’ statement.

“I’m sure the right wing media will jump on this full force but that’s probably about it, but I don’t think it will get the same coverage/outrage as Drew Brees did, which is unfortunate because this is a major fuck up and needs to be addressed.

“That segment annoyed the hell out of me. Sharpe immediately went off on Brees, but here he’s borderline defending Jackson. It’s bullshit plain and simple.” Lol Shannon literally said that Brees should retire after his comments.”

“…while also saying “the minister isn’t hateful” of Louis Farrakhan.”

“Yup, and now on the show they’re saying DeSean should be suspended for 1 game lol.”

“And then he finishes the clip defending Louis Farrakhan who isn’t even subtle in his anti-semitism.”

“Shannon putting the training wheels on for DeSean lmao. Had anybody of any other race said what he said, this guy would be banished from mainstream culture forever, and everyone would rightfully be shaming him.”

“Anyone with a large platform who quotes Hitler should be shamed, mocked, and ridiculed.

“the thing is that he didn’t quote Hitler, he put out a fake quote that attempted to redeem Hitler and the Holocaust by saying the Jews actually are that evil, which is worse, the dude’s a Nazi apologist.”

“Shannon thinks only white people can be racist so…”

“As a black person I have to call it like it is. There is way too much anti-Semitism in our community. I assume it’s because of faux intellectuals following that fraud Farrakhan, but regardless of the reason it’s gotta stop. I just don’t understand how we call for the justice of our own people and some of us put down another marginalized group for literally no reason which as op points out can easily be used to demonize the BLM movement which has been doing so well. Sad all around, love to everyone”

“It wasn’t taken out of context. He’s shared multiple posts from Farrakhan, the leader of the hate group Nation of Islam. This is a group that is anti-LGBT, anti-Semitic, anti-women, anti-diversity, pro-segregation, etc. they hate literally everyone and are the opposite of what 2020 is supposed to stand for.”

“The lack of knowledge when it comes to Hitler and the Holocaust is growing more and more common by the day. It’s sad and dangerous.”

“The dude straight up promoted Nazi ideology. That is fucked up. I would go out and say that is a couple tier worse than what Donald Sterling did.”

“Even softer kid gloves from Stephen A Smith and Max. This is f*cked up.”

“Last year I read ‘The Work I Did: A Memoir of the Secretary to Goebbels’ by Goebbels (head of Nazi propaganda)’s secretary, it goes into detail about the tactics the propaganda ministry used to convince the German public that Jews were a problem, it’s similar to the things Stephen Jackson is saying on social media right now. It’s frightening to see how many people are supporting him in the comments as well.”