Why Matthew McConaughey is my Last Remaining Trigger. 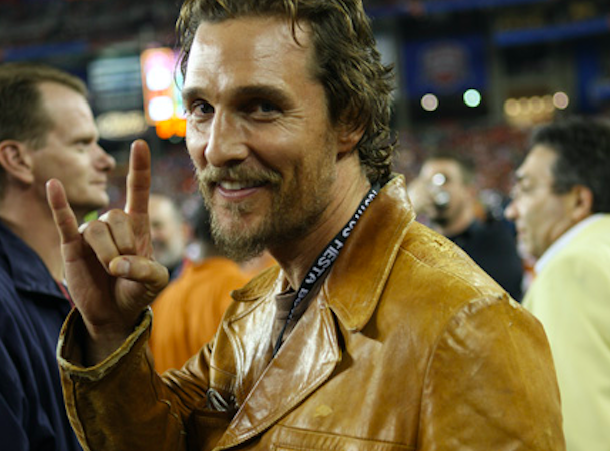 The story, as told by a friend close enough to Matthew McConaughey to sleepover at his house, goes like this:

They were all drinking and bullsh*tting around the backyard firepit. In the wee small hours of the morning, the storyteller had enough—enough hours awake and more than enough booze—and he left Matthew and the dwindling number of lingering imbibers, and he went inside to bed.

The next morning, the storyteller awoke, dehydrated, and regretting some decisions from the previous night. He was thankful, however, that he hadn’t kept going like his certain-to-be-hurting friends who he’d left by the fire a few hours prior. The house was quiet as he turned on the television. He kept the volume low out of empathy for his host and other friends who would surely still be “sleeping it off” well into the afternoon.

As his sleepy eyes came into focus, he could not believe what he saw on the television screen. There on the sidelines of the University of Texas Longhorn’s football game with the noon kickoff time was Matthew McConaughey, smiling like he owned all the secrets of the universe.

This story isn’t hard to verify as McConaughey is making the publicity rounds right now promoting his new book. I’ve long been a fan of his since he uttered the iconic line, “Alright, alright, alright!” in his debut film, “Dazed and Confused” in 1993. But now, I hate him. I hate him because he defies what I have come to understand as an indisputable certainty.

No one is invincible. No one can dance around the fire indefinitely. No one can mix serious childhood trauma with a dysfunctional family situation and heavy alcohol consumption, and keep the train indefinitely on the tracks. No one, that is, except Matthew McConaughey, it appears.

Stardom and Hollywood success are surely no protection against the inevitability of both crashing and burning when drowning our relentless pasts in limitless gallons of booze. Endless examples from Robert Downey Jr. to Charlie Sheen have proven that stars are humans, and thus, are subject to the laws of alcohol abuse. But McConaughey is the ultimate lawbreaker, and that makes him my last remaining trigger.

I am a recovered alcoholic. I’m not in recovery, I’ve moved past cravings for alcohol and onto trying to fix the countless other parts of me that are broken. The distinction between being in recovery and being recovered could not be more important. I do not take things one day at a time. I understand why some people do, but that sounds dreadful to me. I made the decision to become permanently sober after I suffered debilitating anxiety and depression and properly assigned the blame for my condition to the substance I was using as my medication. I learned about the brain chemistry damage done by addiction, and believe firmly that my only chance at peace and happiness is to remain sober until I’m done being a human.

Alcohol doesn’t tempt me. I despise it. I blame it for the years of misery it brought on me and my family. But my hatred of alcohol goes far beyond the walls of my little house in Denver. I blame alcohol for the majority of the domestic disturbances, most physical and emotional abuse, an incalculable amount of underachievement, and countless dashed hopes and dreams of people around the world. When I see people drinking alcohol, I’m neither tempted nor jealous. In fact, I feel sorry for them and wonder about their unfulfilled potential. Alcohol is simply the most available and most destructive of the world’s life-sucking drugs. I’m not the least bit triggered by alcohol.

When I shake off the trigger, I know the truth. I know the damage alcohol did to my life. If you are looking for an example that might help you avoid some serious turbulence, my story might be a tad more valuable than that of the impenetrable lover of the Lincoln Navigator. I wasted 25 years drinking alcohol. I suffered for the last decade because alcoholism is an imprecise diagnosis, and I kept looking for signs that sobriety was an overreaction.

The fact is, the diagnosis doesn’t matter. I call myself a recovered alcoholic because I wasted 10 years convincing myself to own the label, and I’m not going to start rejecting it now. But regardless of how you feel about that stigmatized term, there are only two questions that determine your future relationship with alcohol.

First, do you think about alcohol when you are not drinking? It can be impatient thoughts about a future drinking session or regretful thoughts about the last time you drank. Second, is alcohol causing problems in your life? They can be major catastrophes or minor inconveniences. If you answer those two questions in the affirmative, your relationship with alcohol is guaranteed to get progressively worse with no hope of ever getting better. Unless, of course, you are Matthew McConaughey.

Life choices and directions have consequences. If you have developed an affinity for alcohol that’s leaving you with some scar tissue, I have good news for you. Sobriety isn’t the albatross you probably think it is. Letting your brain function to full potential without a constant barrage of toxins has its benefits, believe it or not. Fewer regrets leave more room for enlightenment. Relationships unencumbered by alcoholic buffoonery succeed at a higher rate. And when we don’t slowly poison our brains and bodies, other chronic diseases are far more likely to leave us alone.

Sobriety isn’t rainbows and unicorns. In fact, I know one unicorn who drinks before joining the team on the sidelines of Texas home games. But sobriety is worth it. And it’s worth putting up the fight to survive all the triggers.

I am jealous of Matthew McConaughey. It isn’t his good looks, acting ability, impressive philosophizing, or his connections in the luxury division of the Ford Motor Company that I envy. I am jealous of his ability to move through life seemingly unphased by life’s realities and challenges. Jealous or not, I’m rooting for Matthew McConaughey. I hope he continues to defy everything I’ve learned about trauma and self-medication until he rides off into the sunset flashing that signature smile of his. But if he ever does implode in most glorious celebrity fashion, I won’t wonder why. Even unicorns catch a hoof once in a while.

As for me, I’m solidly convinced I am human. I think I’m a pretty regular human, in fact. I think my experiences are typical, and my reactions are quite predictable. If you don’t feel a horn sprouting from your forehead, and you feel like you’re on the normal side of human existence, too, I hope we can learn from each other’s experiences.

If you want to know what I’ve learned about how to get back up after I stumble, I hope you’ll read my free ebook, Guide to Early Sobriety.