The Last Four were a Spectacle of Slaughter & the Next Four? A Green Rebirth.

We grin with wonder, our hearts flooded with relief, as the toxic surge slides away.

Still, we worry. It remains in our vision and threatens permanence. The threats are idle, little more than sulfurous gases rising from a fetid deluge. On January 20, we welcome a fresh United States.

This is an excellent time to celebrate. Our votes dispatched a sinister force, a sneering virulence relentlessly choosing rot and death for us, rather than vigor and life.

But the dark forces that whipped reservoirs of malignancy into great crashing waves remain. Today, we stand blinking in the sunlight, savoring the storm’s retreat, the diminishment of its howl. But we witness destruction in every direction. The tide loosed poison across the United States. It slinked down into fragile, volatile places. It saturated entire landscapes.

The horror tide’s stew of contaminates interfered with rational thought and debased delicate human qualities like compassion and empathy. It persuaded many that it was just fine for powerful people to place children in cages. That white people are better than everybody else. That violence is noble, science is a hoax, greed is grand, and caring is for suckers.

Our collective immersion in contagion polluted much more than we yet understand. Fitting that just as the psychic miasma began to thin, inviting us to envision a hopeful future as election season intensified, a literal virus swarmed across the earth. Fitting, too, that those lost in the horror tide’s currents failed to even see the pandemic upending human life. The avarice that possessed them, the brute force they championed, the dismissal of intellectual rigor and benevolence—all of it stoked the proliferation of disease, the dismantling of the economy, the sprawl of death, and their own political defeat.

We will navigate the months and years ahead as visitors to a defiled world. A keen desire for restoration will stir our spirits. But restoration is not enough. Meanwhile, the pestilence gathers strength, even as we evict it from the seat of power that it so desires, that it craves for triumph.

We need more than restoration or even revolution to nurture health, to plant seeds for something like harmony. We need rebirth.

So many things must be done simultaneously, and with great urgency. For example, we must reimagine our relationship with the natural world. The blind, pathological gluttony for treasure that seethed and boiled startled with its rapaciousness.

The horror tide hauled the United States out of the Paris Climate Agreement. It cleared 25,000 square miles of pristine old- and new-growth forest for logging and development in the Tongass National Forest in Alaska. The Tongass stores about eight percent of all carbon held in national forests.

The past four years stand as a spectacle of slaughter. Our oceans, waterways, forests, deserts, grasslands, and atmosphere founder. But they weren’t thriving prior to 2016. All that we have witnessed since has been an aggrandizement of a preexisting condition.

Our house has been on fire for years. We need to rush to the scene and help put it out.

The Green New Deal is a solid start, some version of which President Biden must embrace and trumpet. An especially beautiful thing about the GND’s myriad proposals is they address two vital issues—climate change and income inequality—at the same time.

Without stark differences between incomes in the United States, the tide never would have oozed and spread across the country. In fact, it discovered much of its power in currents conceived through friction between those of means who look ahead and see things glowing rosier, and those struggling to imagine better stations in life.

The tide courted a slice of the latter. It promised things it could never deliver, like manufacturing jobs performed now by people in other countries. It beguiled with sermons about turning the United States into an America First island. Here in America, it screamed, we tend to ourselves, and ignore the rest of the world. This is how we win.

The end of a spectacle of hollow promises:

It was a seductive fantasy. But, among many of those it enticed, it hasn’t led to fatter wallets or easier lives. Not in Rust Belt towns where prosperity often fails to extend far beyond that which a minimart job can deliver. Not in farm country, where the America First approach eliminated important foreign markets, like China.

Instead of offering jobs, the tide jettisoned them. Instead of creating fresh markets for opportunities, it closed them. And then it erected false villains: minorities (for stealing jobs from white people), education (for shepherding people down bogus, sinister paths), cities (for Satanic decadence and corrosive sloth). The list of false villains is long.

The worldwide climate crisis requires enormous investments in technology. The sooner solar panels and windmills replace coal and gas for electricity, the further out we push our species’ extinction. As compostable and highly recyclable materials package goods, rather than petroleum plastic, our extinction grows more distant. When batteries rather than heat from burned fossils powers our vehicles, we buy more time. If vast teams of people plant billions of trees around the world, we begin to capture some of the CO2 that dooms us.

All of this requires jobs. Other countries, like China, have taken the lead with solar and wind industries. But with a strong GND offering high wages and big markets, we can simultaneously cover the roofs of the U.S. with solar panels and deliver real careers to workers. Businesses that make boxes out of hemp, bottles from mycelium, and fuel from algae require skilled employees. We need these companies in Grand Rapids and Erie, in Baton Rouge and Fresno and Tulsa. We need them everywhere.

Green tech is extremely promising—for the planet, its people, and politics. It offers jobs that foster good paychecks and pride.

Our survival depends on more than jobs. Most of what is required hinges on behavioral changes. Become vegetarians. Avoid burning fossil fuels. Plant trees. Replace lawns with life. Reuse.

Our future also requires technologies we do not yet recognize. Tools to trap carbon already clogging the atmosphere. Agriculture that grows food without simultaneously stealing so much from the planet and ripening the climate crisis.

Let’s all get to work. 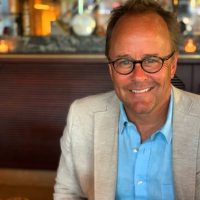 Douglas Brown is the founder of the content marketing firm Campfire Content and Cairns Magazine, a digital magazine devoted to earth healers. He spent more than 20 years as a … Read full bio