Why this Winter Solstice is such a Powerful time for Reflection & Divine Intervention. 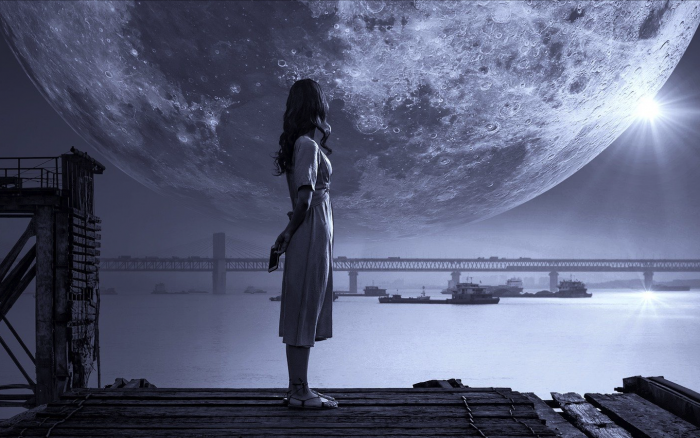 To live is to know how to put our broken pieces back together.

Each year, we rejoice in the solstices as a celebration of both light and darkness.

Depending upon which hemisphere we reside in, we’re either welcoming the return of the light or beginning a descent into the darkness of truth.

The solstice is a reminder—a connection to the life force within—and the divine essence we feel in everything around us. It’s a time of deeper reflection and celebration for how far we’ve come; it’s a time to tune into our soul and to contemplate the year ahead.

While the Equinoxes represent and bring our attention to balance, the solstices are the opposite. Within these times, we often can see what we would normally miss.

As the Northern Hemisphere travels toward the darkest day of the year, light becomes the most important commodity. It’s a time to remember that brighter times are coming, that no matter how impossible things may seem, they can suddenly turn. And that, yes, spring will always arrive, no matter how harsh the winter.

Although the Southern Hemisphere is just beginning its phase of contemplation as the days will soon begin to grow shorter, this is also a reminder that impermanence is the only thing that is permanent.

So, we’re all called within, whether it’s to reflect on where we’ve been or the steps that we’re preparing to take.

But this year, it’s not just the solstice that we’ll be celebrating, but the beginning of an entirely new era.

On December 21st, together with The Great Conjunction between Jupiter and Saturn, we will welcome a new beginning in all of our lives that will reign until 2156.

This is truly the Age of Aquarius.

The Great Conjunction describes the meeting of Jupiter and Saturn. They meet so closely in the heavens that less than a degree separates them, creating the illusion of a single awe-inspiring cosmic star. This event is known as the Christmas Star and is said to be what beckoned to those in the days of early Christianity.

And still, we can feel it call to us, directing us to those fated soul contracts we all made before coming into this lifetime.

To our eyes, it will appear to be the brightest star in the nighttime sky, but it is actually two of the largest planets, which will be in alignment within the air sign of Aquarius. This means that these two planets’ collective energy will strongly affect our lives—now and for generations to come.

Jupiter is the largest planet in astrology and is known for making everything bigger. He also rules over far-reaching horizons and abundance in our lives. Sometimes known for bestowing blessings or luck upon those he touches, this is the planet that often brings the beautiful, unexpected moments into our life that change us forever.

Saturn, though, can operate a little differently (especially while he was in Capricorn). Now that he will be joining Jupiter in Aquarius until 2023, this is the start of an entirely new chapter. Saturn is now going to be tuned in to his own soulfulness—less about the harsh karmic lessons and more about the divine timing that we all try to keep faith in. This planet is known as the father of the zodiac, the one that rules over the infamous Saturnian Lessons that determine such a big part of our life path.

But he also has a gentle side and can help bring together fated lovers and events.

These two planets will be less than one-tenth of a degree away from one another, which means that their energies will be combined and highly supercharged. Think of abundance meeting fate, healing meeting divine timing, and forgiveness joining together with hope. This is the energy that will be surrounding all of us at the time of the solstice, asking us to take this celebration of light and use it to fuel us forward into the next chapter that is just beginning to dawn on the horizon.

There have been so many astrological aspects this year that are considered rare and significant, but this one steals the show; it truly is moving us out of the earthly energy for the first time in 800 years. Regardless of belief or doctrine, this solstice will be one that feels momentous—because it is.

Collectively, we all have been through a challenging year. Even if we’ve been able to see the silver lining within it all, there still have been challenges and moments of difficult growth. But within all of that chaos, we were transforming.

Much like the caterpillar inside its chrysalis, we’ve been tucked inside this year within our own state of becoming.

All those months of being home and in quiet have given us the time to reflect on if where we are is truly where we want to be—if it aligns with our soul. If we hadn’t been given this time, in truth, most of us would have still been drowning within the preoccupation of busy and wouldn’t have the self-knowledge that we now possess.

It’s the hard times in life that often carry the clarity we’ve been seeking.

This year, we have all been seekers within our own lives. We have been searching and hoping for greater meaning both within the events of this year and for what 2021 holds. Now we all know that all of our problems or challenging situations won’t simply disappear as the clock strikes 12 on December 31st. However, we can take steps within our own lives to ensure that we are taking steps toward what we want to create instead of remaining in what we don’t.

On the solstice, light a fire or simply a candle—beckon the light into your life. Write down what it means to you to move from earth energy into this era of air. Reflect on what you’re being asked to make space for without forgetting to express gratitude (not just for what you’ve learned, but how).

Because even though many of us question those moments in which we feel the most broken, it’s never about how we fell apart, but how we put our pieces back together and rose again that matters the most.

It’s always in how we rise.