10 David Bowie Songs you’ve Never Heard (but should Have). 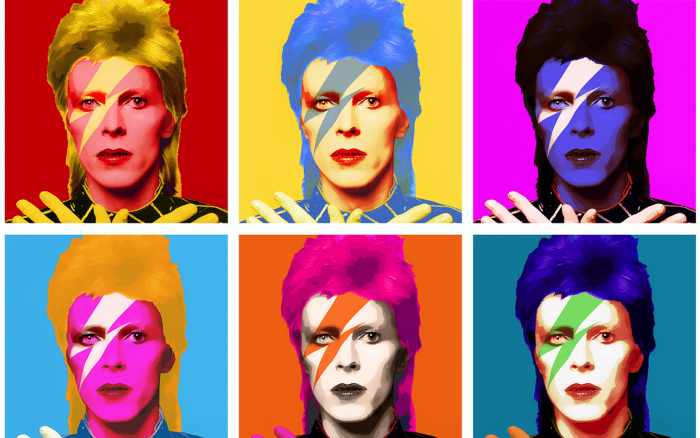 I have a mosaic of memories strung together that make it difficult for me not to think about David Bowie at this time of year.

Aside from the fact that his birthday is January 8th and he died on the 10th, there is the holiday aspect. As a 10-year-old boy, my most joyous moments were when I would take all my Christmas money to the bus stop and wait for the bus going to the center of town where the record store was.

The record store had a drug-like effect on me. My pulse would race, and my heart would begin to beat uncontrollably as I flipped through the rare records and imports—wishing I could take everything home with me. In the days before the internet, little boys (like me) had little access to photographs and information about their musical heroes. There would be little 3×3 shots in Cream Magazine and Rolling Stone, but most of the in-depth stuff would come from putting a new record on a turntable and staring at every word and picture on the album cover.

As the other boys in the neighborhood would be outside playing two-hand touch football, I would be lost for hours in the daydreams of what it was like to be around guys like David Bowie—either on tour or in the studio.

This aspect of my childhood made it so that I was very familiar with what is commonly referred to today as “deep album cuts.” Of course, to me, they weren’t deep album cuts; they were the songs on the album I loved. I had no occasion to listen to commercial FM radio as a child. So while I may have been exposed to the bigger hits, it was the more obscure stuff that I loved.

As with most art, it is typically not merit that distinguishes commercial success from obscurity. In fact, it almost seems utterly random at times. With an artist like David Bowie, you kind of know that he went into the studio with each song as if it was going to be the greatest song in the world. He put all of his heart into everything he ever did, and he had the courage to change drastically with each album, no matter how successful he was.

There was a later interview with him where he was asked if he had any advice for people trying to get into the music business, and his response spoke volumes about who he was as a creator:

“Go a little bit out of your depth. And when you don’t feel that your feet are quite touching the bottom, you’re just about in the right place to do something exciting.”

The following are 10 songs from David Bowie that most people are not terribly familiar with, but really should be:

I will admit, this song escaped my notice as a youngster, but when I suffered what I still consider the most traumatic heartbreak of my life—in college—I finally understood what this song was meant to evoke. It is a feeling of loss and emptiness that takes an enormous amount of artistic skill to tap into without becoming too sappy and unlistenable. And as young as Bowie was when he wrote and recorded it, he was able to do it with aplomb.

If you happen to be a person whose musical taste doesn’t go beyond the mainstream, you might consider this song to be “weird.” It is an eerie waltz-like tune that delves into imagery that was part Neitzsche and part Aleister Crowley and has been credited with being one of a couple of songs from that era that inspired the entire Goth movement that began with Bauhaus and The Cure years later.

Clocking in at under two minutes, this track from the very start of Bowie’s historically famous “Berlin Trilogy” is super powerful. The Berlin period was an awesome and fertile time in Bowie’s career and is worth looking into.

4. “Always Crashing In The Same Car”

This is another song from the album “Low.” During the height of Bowie’s cocaine addiction, he spotted a dealer in Los Angeles who ripped him off, and he rammed into his car numerous times as retaliation. The whole drug scene in and of itself was a never-ending saga that also felt like continually crashing in the same car, as well, so the meaning of this song is both literal and figurative.

There is nothing about this song that isn’t incredible. The drum track is like nothing I have ever heard, the lyrics are poetry, and the rhythm sounds like a runaway train. To me, this is one of those songs that, for all intents and purposes, should’ve been a radio hit.

This song has always been dismissed by critics as “early Bowie before he found his creative vision.” And it is easy to overlook because of its Bo Diddley rhythm and its linear storyboard lyrics. Still, something about the singer’s empathy and ability to convey emotion has always struck me.

This is another song that should definitely have charted. There isn’t too much difference between a song like this and “The Jean Genie,” but once again, it falls along the lines of obscurity. It describes what Bowie observed on the Sunset Strip in the early 70s: drugs, prostitution, and debauchery. I guarantee it will make its way into one of your playlists.

On the album “Hunky Dory,” Bowie did a trilogy of songs written for his heroes Bob Dylan, Lou Reed, and, of course, Andy Warhol. Twenty years later, in an interview, the songwriter admits that when he showed Warhol his song, the pop culture icon just walked out of the room without saying a word. In fact, he never discussed the song—ever. Regardless, it is a great one and deserves to be on this list.

This song was originally about the Cold War and featured King Crimson’s Adrian Belew on mandolin and Brian Eno making random sounds. He makes a startling point with the line, “…Dignity is valuable, but our lives are valuable, too.” The refrain of, “We’re learning to live with somebody’s depression” will take up residence in your ear for days. It’s just one of those hooks.

This song literally dropped from the sky in 2013. Bowie did not want there to be any announcement or fanfare, so he just had it added to iTunes for his fans to simply discover. The lyrics are mysterious and require knowledge of German landmarks to fully comprehend; the piano chords are otherworldly, and the emotion is intense. There is a story that Eric Clapton called David when he heard the song to thank him for creating something “so beautiful.” Bowie replied, “Thanks, old sock.” (“Old Sock” became the name of Clapton’s new album later that year.)

Any obscure Bowie songs you think should have been on this list? Let me know in the comments below.

Listen to all the songs here: