Chilling & Devastating: Patrick Warren Murdered on his own Front Lawn.

Footage shows that earlier that day my father was outside praising God saying “Take It By Faith”. My father was no threat to officer Reynaldo Contreras.

Patrick Warren was a beloved father, husband, and pastor.

And to his fatal detriment, he was also an unarmed Black man in the midst of a mental health crisis who was nonetheless tased and shot three times by a Killeen, Texas police officer on January 10, 2021.

It happened within 90 seconds of the officer arriving at his home in answer to a mental health crisis situation.

The video is a quick watch, but chilling. The cries of his family members will stay with you. You need to see it, to listen to it. To care.

It hit me, unearthing a bit of my own trauma, and it resonated deeply. I sobbed wet, sloppy, endless tears for this man and his family. For the horror they just witnessed: their loved one being murdered in his own front yard. For his life snuffed out so senselessly. It’s devastating.

And what’s also devastating and frustrating is that it was completely avoidable.

Ever heard of “defunding the police?” This is why. An apparently trigger-happy, armed police officer is not who should be responding to mental health crises, particularly not the crisis of a Black man. Can you see how armed police responding to a mental health crisis could be largely problematic to an individual experiencing delusions or paranoia? And particularly problematic when responding to a Black man living in our country—where a legitimate fear of police encounters is justified, seeing the amount of police brutality exercised toward people of color? It’s a recipe for disaster.

Many cries to “defund the police” resounded in the aftermath of the murder of George Floyd on May 25, 2020. The phrase is problematic to many, though, “reallocate police funding to expand social services” doesn’t exactly have the same ring to it.

Despite some activists who wish to truly defund and abolish the police as we know it (and I can’t say I fully disagree, but I’m also a realistic idealist), “defunding the police” is an attention-grabbing misnomer, with extensive reforms to police departments and reallocation of funds to include more social services, like trained mental health crisis response units, medical care, and other supports being the ultimate goal, in lieu of police response and brute force.

This applies to those struggling not only with mental health, but addiction and homelessness, where providing compassionate response, medical care, and treatment could take priority over incarceration and criminalization. It can be done successfully, save lives, and cost a fraction of a typical annual police budget.

In Eugene, Oregon, a 31-year-old program called CAHOOTS (Crisis Assistance Helping Out on the Streets) is a collaboration between a community service called White Bird Clinic and the local police. More than 20 percent of 911 calls are routed to the clinic, where unarmed, trained crisis workers respond to mental health situations. Crisis workers wear no uniform, nor do they carry a gun or handcuffs. Their tools are their extensive de-escalation and crisis training as well as knowledge of local resources and how to apply them as needed.

However, programs like CAHOOTS are only as strong as their community’s local resources—which is where divesting bloated police funding to social services comes in. Despite some areas in the country that are making changes and getting it right, the need to reform police response to mental health crises is dire. In Patrick Warren’s case, a visit from a compassionate, unarmed crisis worker might have made all the difference—perhaps he’d be alive and well, getting the help he needed. We’ll never know.

I am almost 40. Educated, “high-functioning,” and productive as I may be, I’ve experienced quite a few mental health crises over the years: intense manic episodes which prompted my loved ones to call the police for intervention, and to forcibly commit me to psychiatric facilities. Not once, not twice, but no less than eight times or so. (I’ve honestly lost count or blocked it all out, one or the other.) Each time police responded to my home, I resisted and refused, not ever wanting to willingly go with them. I even held stand-offs where more backup was called. I once barricaded myself in the bathroom and officers eventually busted out portions of the door just above my head, where I was sitting on the floor with my back against the door. Another time, when I was 28 and a nursing mother to my six-month-old daughter, I was held so long in the back of a police car while they figured out what to do with me, I managed to distort my strapped-in body while in handcuffs, and kick out the bulletproof back window of the police cruiser.

All this is to say, I am a 5’10” semi-attractive white female and I am alive to tell these stories.

It’s worth noting that while I might’ve been pinned to the ground or ended up covered in bruises, my life was never threatened. Not a single taser or gun was ever drawn on me, even at my most resistant.

New video footage shows an earlier crisis where a trained deputy was able to de-escalate the situation with Mr. Warren:

For more information about what happened to Patrick, or to learn how you can support his family during this heartbreaking time, visit the following Instagram pages: @justiceforPatrickWarren, @ShaunKing, and @LeeMerrittEsq. You can find the GoFundMe page to support his family here. 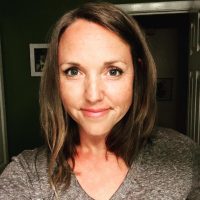