Racism in America: a Message for White People who “Don’t Know Where to Start.” 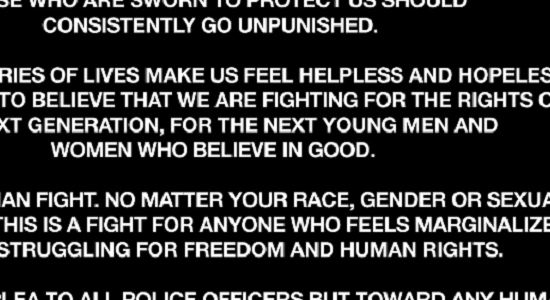 It is not the job of a marginalized community to educate you. That’s a privileged position. Educate yourself, open your mind and your heart. Be a part of the solution. Repost @alitalan #blacklivesmatter#philandocastile#sandrabland#altonsterling#justice#guncontrol

For elephant’s full coverage of events in Charlottesville, and photos, and video, and quotes: here.

“It is up to us to take a stand and demand that they “stop killing us.” We don’t need sympathy. We need everyone to respect our lives.” ~ Beyoncé (To read the rest of Beyoncé’s open letter, as well as figure out how to contact your Congressman or woman, click here.)

>>> We can now add Terence Crutcher and Keith Lamont Scott to the growing list of black men shot and killed by police officers.

That is the only word I can use to describe where my head is at right now.

Fuck sadness. You can keep your sadness and your prayers and your chants of “all lives matter” and “we are one.” Because it is open season in America—has been for far too long—and the targets are black and brown folks.

A few days ago I wrote an article praising Jesse William’s BET speech. I felt inspired, hopeful that we could start seeing a change. The Pollyanna in me hoped this would be the gut check white people, or anyone who insists on denying the existence of racism in this country, needed to, at the very least, acknowledge their privilege and sit with that discomfort. I also hoped we wouldn’t have to add any more names to the already too long list of black men who are being systematically taken out by white police officers.

But a Disney film this is not.

Because this week alone, two young black men—Alton Sterling and Philando Castile—were shot and killed by white police officers. And their killings have sparked outrage.

As an elephant journal editor, I understand all too well that I work for a website dedicated to mindfulness, to being of benefit. And while I hope my words prove to do that, I currently do not have the energy to be overly kind or open-hearted to people’s platitudes and social media bullshit.

What is happening to black and brown men, women and families in this country is disgusting and disturbing and a blatant disregard for human life.

And I’m tired of people complaining that anger isn’t the solution. That only love can stop this. That is bullshit.

We need to be angry…every single one of us needs to be mad as hell. Minorities need to keep demanding that our lives be respected. “Good cops” need to demand that “bad cops” be prosecuted. White folks need to allow their anger for lives lost to be greater than their discomfort in dealing with racism.

We need to get angry. And then, we need to channel that anger into change. Because the opposite of love isn’t anger or hate, it’s indifference.

Yesterday an acquaintance on Facebook commented on a post I shared (picture above). She was “saddened by the anger in this response.” She then proceeded to explain to me that in her job as an educator, she must teach children who don’t understand how to understand; and what a great opportunity I had to become an educator for those like her who “don’t know where to start.”

I considered not responding, mostly because the state of this country exhausts me. But then I realized that sometimes you have to become so angry, so impassioned, so uncomfortable, that standing still and staying quiet are no longer an option.

This was my response to her and anyone else who “doesn’t know where to start.”

Glad we can agree there needs to be a change. The problem with your logic though is that we are adults, not children. We do not need our hands held. We do not need a tour guide through life. As adults, we are capable of reading and researching. We are capable of asking the difficult and necessary questions (particularly of ourselves), and yes, doing the work, to create real change.

And once we’ve done the work, then we are capable of educating the younger generation. I have spent my life, as have most people of color, doing the work to understand and process how being “not white” in this country shapes the way I move through the world. I continue that work every single day, without the help of white people.

You can feel saddened by the anger in my words and in the quote I posted, but your sadness doesn’t make those words any less true. And your sadness cannot compare to the sadness of countless black families who have had to witness their loved ones gunned down in cold blood by white police officers who may also claim they “didn’t know where to start.” And it is not the responsibility of those family members, or people of color anywhere, to walk you through the process of changing everything you’ve been taught by those who came before you.

What a great opportunity you have to use your experience as an educator to better understand racism and privilege and what it means to be white in America—and also how you can then use that knowledge to ensure that your students, regardless of race, don’t find themselves having this same conversation 10 years from now.

The consistent murder of black men, as well as the recent and horrific police killings in Dallas, are forcing us to face our ugliness as a country.

It’s time for folks to step up and do the damn work. Deal with your discomfort and defensiveness. Deal with our country’s racist history and equally racist present. Own up to the fact that white privilege exists and thrives in this country at the cost of other people’s lives.

Recognize that if you’re not part of the solution, you are a huge part of the problem. And then be part of the change. Learn, grow, question and redefine how you fit in the world so that maybe one day we can get to a place where we stop being sad or claiming love is all we need. Where we can say “all lives matter” is a truth we live daily through action and not an ignorant catch phrase that only further allows us to ignore the problem.

Do the work. Be the change.