The Birth of Ella Emhoff’s Career & the End of Rush Limbaugh’s (& How to Mindfully Respond). 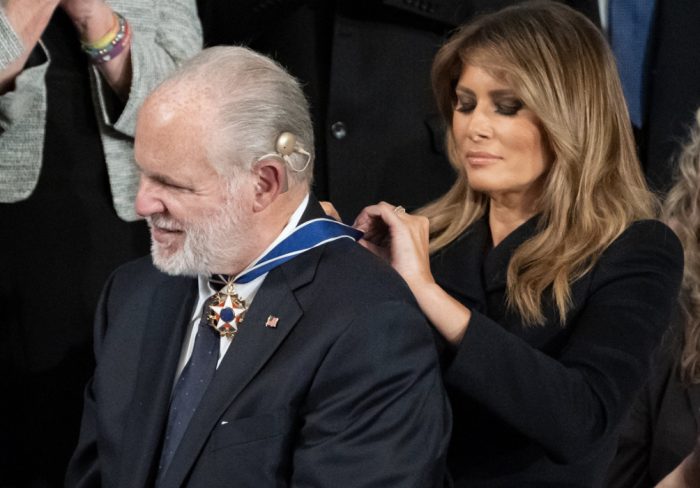 “If you can’t say something nice, don’t say nothing at all.”

I grew up hearing this adage from my wise mother, who quoted the bunny in the Disney movie, “Bambi.” The advice that was uttered in a sing-songy voice by his buddy Thumper has remained with me to this day, although I am hard-pressed at times, to hold to it. There are times when we do need to speak out when an event occurs that rattles the bones.

Two news stories appeared this week, one deserving of praise, the other…well, that’s where I stumble a bit.

Both brought cheers and jeers, depending on which side of the political aisle the commentators sit. The first celebrated the modeling debut of 21-year-old Ella Emhoff. A student at The Parsons School of Design, she caught the attention of IMG Models and then the planners of a modeling event.

They were dazzled by the coat she wore at a rather momentous event itself, the inauguration of our President and Vice President, who happens to be her stepmother, Kamala Harris.

When I first saw a Facebook post about the turn her career path was taking her, I gave her a fist pump and offered her a virtual high five. Then I read some of the comments.

Right out of the box, people focused on her appearance, which they deemed nothing special and not worthy of attention on the catwalk, her armpit hair, and of course, her status as “second-stepdaughter.”

Of course, they reasoned, she didn’t really earn her place on the runway. Their misogyny was showing, as some even implied that she slept her way to her position, like Vice President Harris, neither of which is true.

Like a protective mama bear, I had a few choice words rolling around in my head, but I didn’t express them, not because I didn’t think they were justified, but because I knew the writers wouldn’t have the ears to hear them.

Instead, I am sharing them here in a much more civilized way. I have learned that it is sometimes the better part of valor to sit with my thoughts rather than reacting impulsively, no matter how well-intentioned.

Did it occur to them that having connections is how many people are presented the opportunity for career advancement and having the goods to back them up is necessary? How many people with no experience are discovered while going about their daily lives, little knowing what awaited them?

I have learned that it is both a mix of who you know and what you know. Someone can hold open a door, but you need to have the ability and willingness to walk through. I look forward to seeing where her design and modeling career goes.

The second news story of the week is the death of Right-wing radio host Rush Limbaugh who succumbed to cancer this past week.

He delighted in engaging in the peddling of put-downs that fueled the fire of his listeners’ own disdain for anything remotely smacking of progressive or Liberal perspectives. Slamming Michael J. Fox, claiming that his Parkinsonian tremors and tics were manufactured and rejoicing at the deaths of people from AIDS, he earned his place in the Hall of Shame.

My own Rush Limbaugh story harkens back more than two decades ago. My father-in-law, who shared some of his Conservative views, but, blessedly, not his bigotry, had bought my husband a book he had written as a way of taking a poke at his Liberal leanings.

Rather than reading it, Michael turned it upside down and made it a perch for the Bloom County character Opus T. Penguin. If memory serves, I had given him the cuddly stuffed critter as a birthday present since we loved the comic strip created by Berkeley Breathed. The editorial cartoonist ruffled some feathers on the Right as his column took on the events of the day with a wink and a nod and often calling out injustice. That tableau seemed fitting as it blew raspberries at Rush.

When I heard that he had passed, I neither cheered nor jeered.

Instead, I did feel a sense of relief that one more mouthpiece for hatred was silenced and one more supporter of a despotic pseudo-leader was gone. On my Facebook thread, I saw that some were not so circumspect in their comments.

I thought about the spiritual wisdom of the Three Gates through which our words should pass, “Is it kind? Is it true? Is it necessary?”

I’m not sure I can say anything kind about the man, although, I imagine, he loved someone, and perhaps even did something caring. I did some fact-checking and discovered some accurate attributions and some questionable ones.

He was also fact-checked for some of his declarations, and the majority of particular statements he made were considered “pants on fire worthy” by PolitiFact. One of his most ardent admirers bestowed upon him the Presidential Medal of Freedom which served to validate his status and elevate his platform among his fan following. He weighed in on the horrendous events of January 6th—both minimizing and justifying them.

“I remember when Rush did this to Michael J. Fox. When he did this, it reiterated just how awful Rush Limbaugh was as a human being and why I won’t miss him. During the height of his radio career, Rush went completely deaf. Obviously a devastating blow to what is your life’s work, not to mention the quality of life. But he got a second chance, thanks to technology, and not worrying about the money for it. Cochlear implants allowed him to hear again and continue his same quality of life, along with his career. This is an experience that should humble a person. And yet, he continued to attack anyone who seemed to stand in the way of his agenda or his wealth. On his show, he would champion against anything that would help the poor or disenfranchised, to the point of mocking Michael J. Fox’s disability to suit his agenda, while Fox was working on expanding healthcare to the poor. All the while….without his money or cochlear implants, he himself would be disabled. I just think it takes quite an evil person to be able to be like that. To be that selfish. This is how he felt about other human beings. It should be no surprise that many are not mourning his passing.”

Now comes the question of necessity.

As a keen observer of life and a commentator myself, it seems incumbent upon me to express my take on world events, hence this piece. Thumper’s mama’s guidance has me using well-honed filters. I feel no glee, no schadenfreude at his demise.

I wish that when his soul arrives at its destination, he is able to do a life review and recognize where he went off the rails, and finds the peace that evaded him in this lifetime.