How Oracle Cards Help me Heal in Times of Darkness. 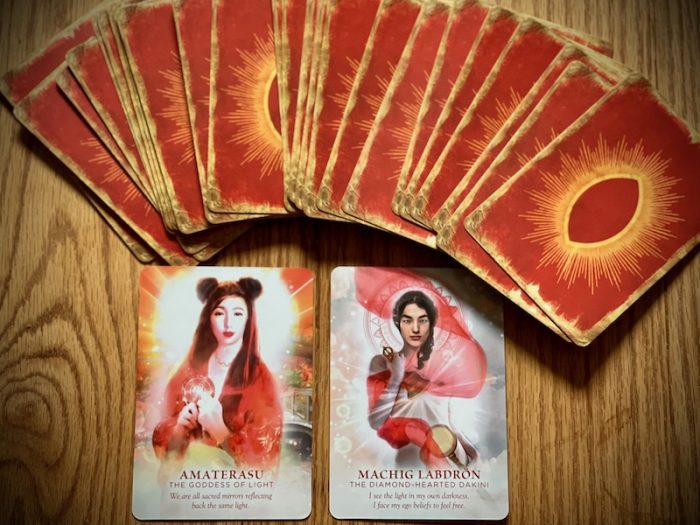 I’d never heard of these, but was intrigued when a call-to-action marketing email successfully triggered my FOMO­—oh no, time is running out for holiday shipping!? Click.

I was feeling my seasonal holiday blues starting to kick in and thought these cards might be a fun thing to play with. I saw a deck that was on sale and had good reviews so without really knowing what it was, I bought it. Little did I know these cards would actually promote some spiritual healing.

So, what the heck are oracle cards? In a nutshell, they are tools used for divination. An oracle is anything serving as an agency of divine communication or revelation.

Unlike tarot cards, oracle decks are freer in form and have no rules. Rebellious rule-breakers, rejoice! They aim to develop intuition and are often more focused on inspiring their readers. They can also open our eyes to patterns and help us break them.

The deck I have is called The Divine Feminine. It has 53 cards with beautiful artwork featuring saints, mystics, poets, priestesses, gender rebels, cross-dressers, trailblazers, and holy troublemakers. They represent both divine beings and the human women who sought to embody them.

As I write this, it is not lost on me that March is Women’s History Month. I’m not sure what drew me to this deck last year, but it’s interesting that I began paying attention now. Hello, Universe! Nice to see you!

The guidebook for my oracle deck says that we are all divine and contain our own answers. It gently nudges us to set intentions and gives meditation prompts for each card, but so far, I’m not doing that. I have approached the process from a place of curiosity, choosing fun over rigidity.

I choose a card, sometimes more than one if I feel inspired, read its description, then I reflect and try to interpret my own personal meaning. Sometimes, I have to really dig for the meaning. Other times, I get goosebumps with the revelations.

Like so many others in our world, I’ve suffered from depression during this last year. The severity of it lives on a spectrum (luckily, never severe enough to need medication), and it tends to fall prey to triggers and traumas. The holidays are a common trigger in normal circumstances, but a pandemic that kept me from seeing my family made it so much worse.

I believe these two oracle cards spoke to me because of the low mental state I’ve been in and my desperation to heal and feel better—which, by the way, I am beginning to.

I see the light in my own darkness. I face my ego beliefs to feel free.

Tibetan Buddhists believe Machig was an incarnation of the female Buddha Vajrayogini and, after her death, she reincarnated as Lama Tsultrim Allione, an American Buddhist teacher. According to Machig, a demon is anything that obstructs the achievement of freedom. She developed the tantric practice of Chöd and later, Allione wrote that Chöd, “is a method for bringing our shadow into consciousness and accessing the treasures it holds rather than repressing it.”

This resonated deeply because of my lifelong depression that seems to get triggered more and more often. There are some vague and fuzzy memories of things that were done to me as a kid as well as the mistakes I made as a teenager and young adult, but I do not remember much of my child—or adulthood. In fact, for almost a decade, I repressed a significant childhood trauma that happened when I was eight-years-old. I think disassociation became my way of coping with a chaotic and unpredictable home-life, which is probably why I have hardly any memories. Because of this, while I understand how this could cause depression, I’m not entirely sure why I battle with the illness, get triggered so easily, and struggle with lasting healing.

I am fascinated by the research on psychedelic therapy and really want to try it, but the fear of what I might see in an altered state of consciousness holds me back. I’m scared to face my demons or shadow because of the shame caused by the few memories I do have and the real fear of what I don’t remember.

Machig became intimate with her demons—the thoughts or beliefs that kept her from experiencing joy, bliss, and pure love. She knew that no one and no single situation has the power to derail us. The power rests within us, but we have to make the darkness conscious. Her card reminds me that I need to shine light on my shadow, to work through the fear, and the healing freedom I desire will come. Not only do I need to face it, but I need to embrace my shadow. 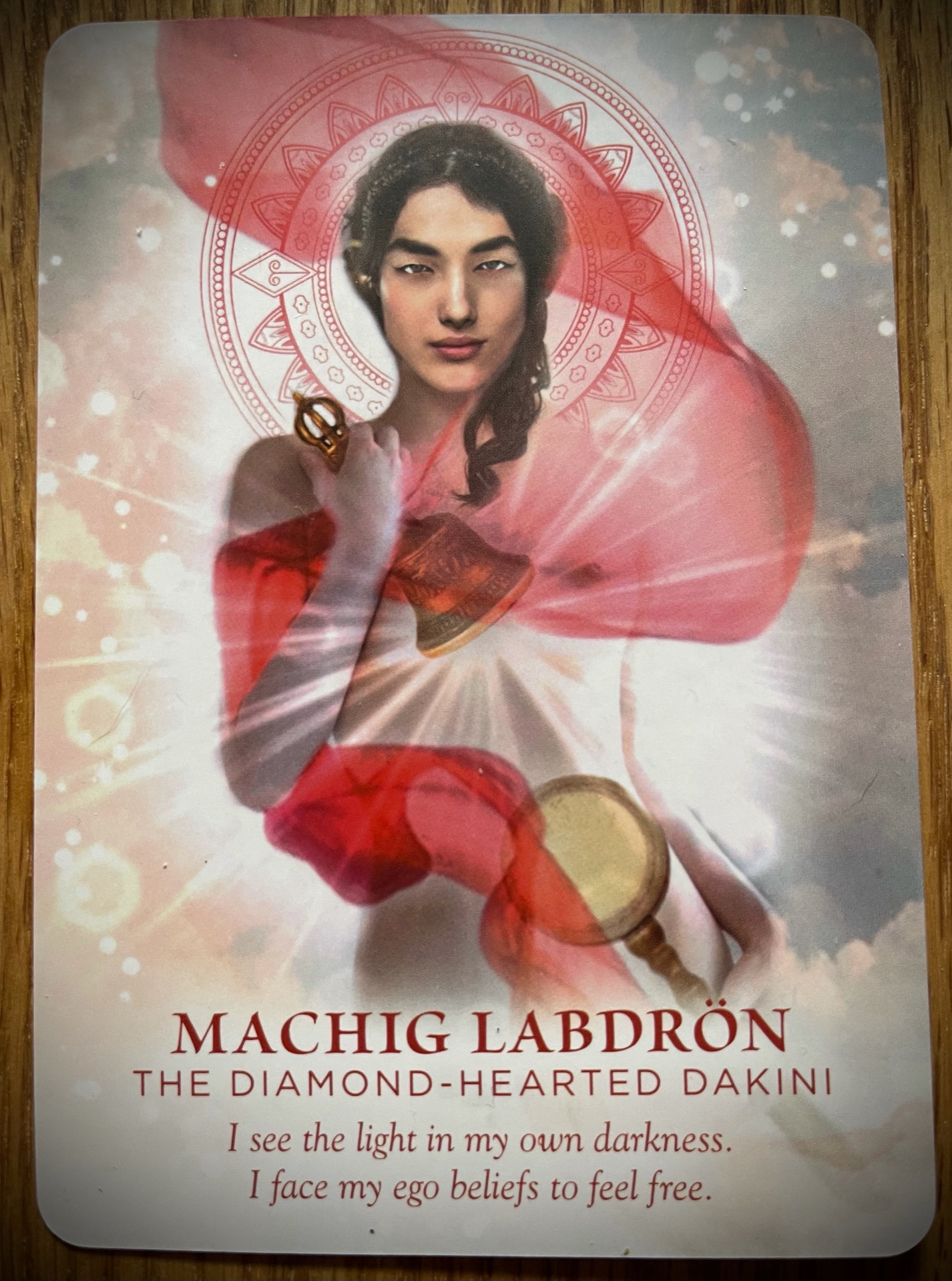 Amaterasu, The Goddess of Light

We are all sacred mirrors reflecting back the same light.

Amaterasu is the solar goddess of Japanese mythology, the most powerful deity in the Shinto religion. A well-known legend is when she got in a fight with her brother, Susanoo, the god of storms and of the sea. She was so upset with her brother’s violence that she retreated into a cave, leaving the world in darkness. The spirit, or kami of merriment placed a mirror outside the cave and laughed so much that Amaterasu became curious, peeking out of the cave to see a stunning vision of the dawn, not realizing it was her own reflection. Surrounded by laughter, her anger and depression lifted and she left the cave, bringing her light back into the world.

During the times when I’m feeling so low and can’t deal with the world, I will self-isolate. I’ve often described it as “crawling in my cave” and sometimes I will stay in my cave for many months. I will stop talking to friends and family and will even stop using social media because the pain of seeing everyone living their happy lives makes me feel so broken and alone.

I know social media life is not always reality, but when I’m down, all I want to do is escape anything that makes me feel bad. I will fall back on addictive patterns and binge—watch-read-eat-drink-smoke—things to keep me isolated and hidden. I neglect myself and others, especially those closest to me.

Amaterasu’s card spoke to me because of the reason she came out of her cave: she was curious and attracted to someone else’s joyful light and then was able to see her own. Twice this past year, I’ve been lured out of my cave to write. 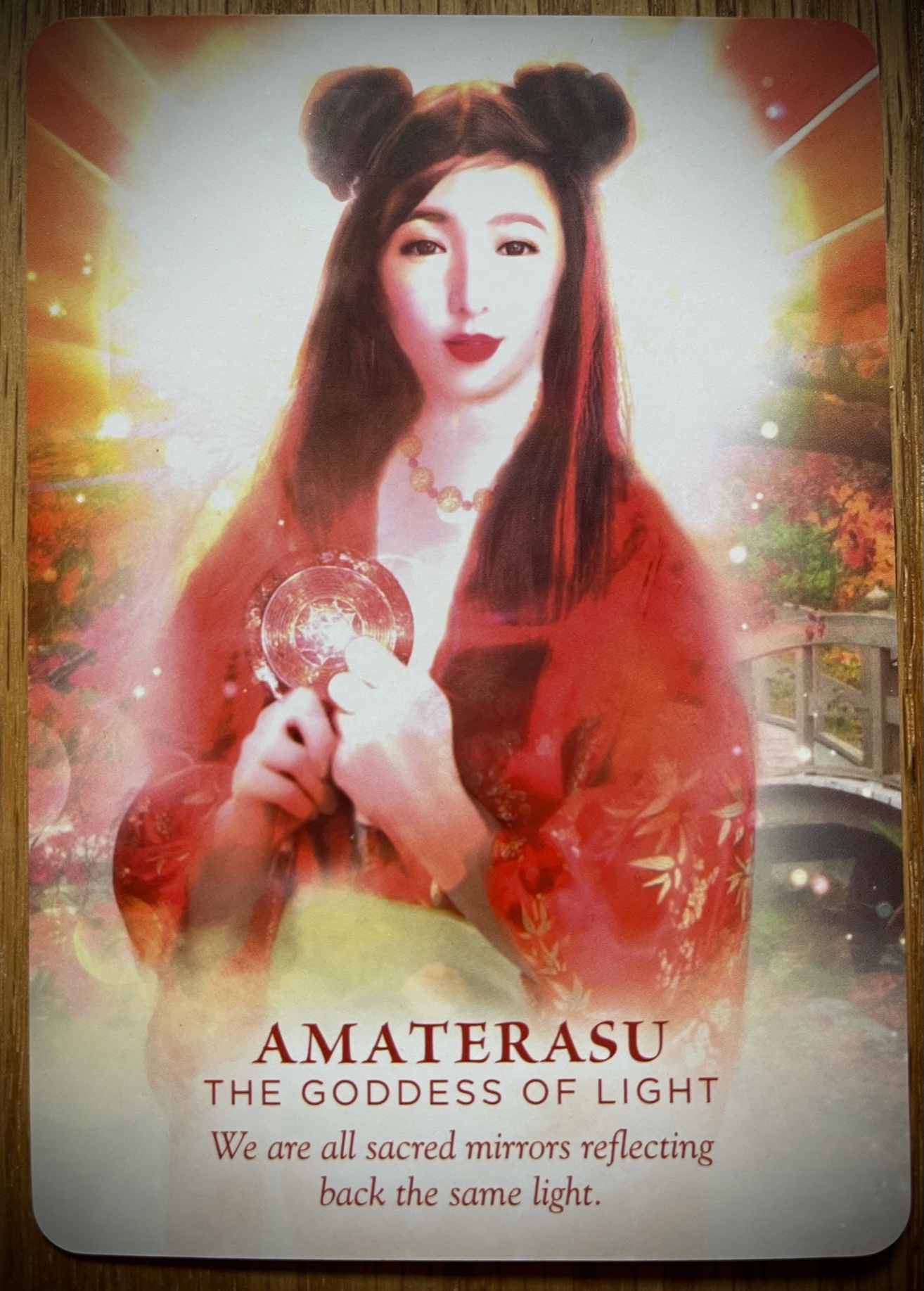 I joined Elephant Journal‘s Writing Academy, a program that not only helps you find your voice, but also connects you with a kind and loving community, many of whom are going through similar life struggles. We help each other by sharing our stories and give each other a safe space to be vulnerable.

I’ve known, since I was young, that helping people is important to me. It lifts me up and makes me feel better about myself—it helps me see my own light. Sharing my light by helping others through writing has brought me out of my cave. 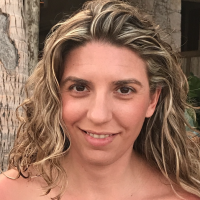