How my Suicidal Thoughts helped me Find my Soul.

It was the end of another interminable day at one of the mental health agencies where I used to work.

I was living alone in a single room occupancy the size of a large closet in the Tenderloin in San Francisco. There was barely any natural light that ever made its way into that space. Trash always filled the miniature, inaccessible courtyard below, and the air was always haunted by the sounds of the building’s other occupants, mostly strangers despite our shared status as lost souls of different varieties.

Sometimes I would take my final calls lying in the bed, which took up my entire “apartment,” with my eyes closed, feeling the hollow clanging of burnout in my head, almost like a constant hangover headache. I was holding onto my nicotine vape for dear life in those days. I’d often suck in a deep, milky drag before beginning those final laying-down calls. It was comforting and satisfying, somehow, to see the milky haze of my exhaustion, jadedness, and detachment materialized around me.

Life’s little pleasures. That’s how I saw it.

I want to kill myself.

The thought would creep in. It was familiar. It was like this malevolent jack-in-the-box that would spring up once in a while, bouncing back and forth, repeating its mantra like a creepy windup doll. It often accompanied the episodes of laying down. The thought on its own could be harmless enough. It had the texture and quality of anyone’s repetitive internal goblin thoughts like, You’re fat. You’re ugly. No one likes you. I’m a licensed psychotherapist in private practice now, so I’m pretty familiar with the most typical lines that people’s internal goblins like to recite.

Yet, despite the hollow windup doll quality of this thought that would enter my mind unbidden from time to time, there was also a danger to it. It had a gravitational pull, like a planet. The first recitations of the line, I want to kill myself, were like the first flirtations with the planet’s outer rings. There was a way in which the thought had the potential to pick up momentum and speed, and I was sometimes actually in danger of circling closer and closer to planet suicide. I used to call it “touching down with both feet on planet despair.”

Even then, I didn’t think of myself as a “globally suicidal” person. I merely thought of myself as a person who, for some reason, was in danger of getting sucked into this suicidal vortex from time to time. That unbidden, recalcitrant thought, I want to kill myself, was the first sign that that weather system might be coming, like electricity in the air, or the first little spattering drops of rain.

Since I only experienced the suicidal part of me as just that, a part, I felt I was really only in danger of actually dying as the result of my suicidal thoughts if I one day got sucked all the way into the storm, touched all the way down with both feet on planet despair, and was alone. So naturally, the larger, deeper, more central parts of myself (whatever you want to call them) wanted to figure this out.

I decided to follow my instinct to take the recrudescence of my inner suicidal jack-in-the-box as a signal that it was time to look inward, really, really deeply. It was time to ask myself some brave questions, and to live into my own brave answers.

At the time, I kept a tiny succulent plant on top of a cabinet and accidentally knocked it over one day. I repotted it, gently watered it, put it back in its place, and whispered over it, live, live, live. Those words replayed in my mind later on in the same day like a song stuck in my head, and something within me moved me to turn that command toward myself. And I was immediately moved to tears.

“Tears are a river that takes you somewhere…Tears lift your boat off the rocks, off dry ground, carrying it downriver to someplace better.” ~ Dr. Clarissa Pinkola Estes

It’s difficult to put this inflection point into words or to give it any kind of dramatic flair because the journey of turning toward our souls can be so incredibly subtle like an utterly inarticulable secret that happens in the deepest center of our lives and bodies.

For me, the change happened in conjunction with finally admitting to myself that I needed to be an artist of some variety or else I literally did not want to live. In this way, my internal suicidal tick forced me to look at my deepest truth and how I was not living in alignment with it. In the years since this inflection point, I’ve more clearly defined what I mean by “artist.” I meant (and mean) someone who lives from their center, from the deepest place within them, the place you might call “soul.”

For me, that meant figuring out a way to work for myself and to creatively liberate myself more and more. It didn’t matter how it ultimately “all worked out.” The simple act of trying to figure out that path and get onto it was enough to change the overall tone and quality of my life.

The funny thing is, by finding my soul, I stopped being a lost soul.

Often when we really begin to listen to our souls, we’re afraid of what we might hear.  We might be forced to finally admit to ourselves that we truly, desperately desire some kind of career change, relationship change, lifestyle change, location change. Sometimes that is the case. But more often, soul speaks in little nudges, soft little suggestions that don’t seem like anything special on the surface, but that slowly accrete into more dramatic shifts.

Learning to hear and honor your soul is a little like deciding to grow your hair long in that way. On a day-to-day basis, it might not seem like much is really happening, but a year or two later, you’ll look in the mirror and suddenly notice a dramatic difference.

Where did this all lead me, I hear you ask? I have a full therapy private practice and a book coming out this year, and I’m now exploring the coaching space as a space where I can serve people in even bigger ways while creating the freedom for my books and writing to be whatever they need to be.

I’m about to follow my soul up into the redwood forest with my beloved where we’ll live with our two cats. And every day, I will continue the practice of returning again and again and again to the teacher of my soul, honoring the messages and wisdom of my soul in all ways. I’ll do my best, anyway. And in my very blessed case, that old jack-in-the-box appears not to be finding any reasons in my life since my soul-shift to grab my attention.

Having said that, no two cases of suicidal ideation are exactly alike. If you or a loved one are experiencing suicidal thoughts, please call a local 24-hour Warmline for support, suggestions, and resources. 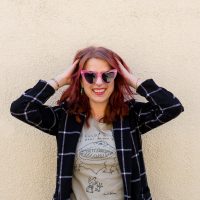 Annalise Oatman is a writer (of non-fiction that reads like weird fiction and of poems that read like prayers of power to the artist inside each of us).  She is also a licens… Read full bio