Political Ramblings of a Suburban Housewife.

There is nothing more toxic right now in the United States than the division between the political left and right.

I am a suburban stay-at-home mom. I care for our home. I have many hobbies—one of them is politics, another is giving a f*ck.

From the comfort of my home, I get to create our “best life.” Fortunately, for me, I have this privilege. I am not lucky enough to be safe and secure during a pandemic—I am fortunate enough. Recognizing that privilege, I acknowledge what it is to be without it.

The disparities have been impossible to ignore for the past year. Turns out pandemics are a great time for highlighting our social inequities. Consequently, there has been plenty of time to read and learn the history.

Several years ago, my husband and I went to Ireland. We visited a prison, an old English prison, while in Dublin. Kilmainham Gaol. The original structure, dating back to the 19th century, was made of limestone. Limestone is deeply absorbent, which creates a terribly treacherous and cold environment during the rainy seasons.

Children were jailed for petty crimes, like stealing bread. And for many of the adult prisoners, Australia became their ultimate destination. They were destitute. We felt sad for them, unbelieving of the horror, separation, brutality, illness, and death. How sad for those children so long ago in a far away place.

Their only crime was being poor. And yet. What of the children being incarcerated now, in the United States? What of the adults? They don’t get shipped overseas; they get returned to the poverty from which they came. Their poverty being their own personal responsibility, unrelated to the greater society at large.

From my perspective, the health and wealth of our nation require a real investment in our future—a future that is more equitable, safe, and secure. But that would take acknowledging the inequalities, the rips at our fabric, and mending them. For real this time.

But we don’t have these conversations as families or friends around the kitchen table because one, we don’t think about poverty if we’re not poor and never see poverty; two, we have our own problems so we remain insular; three, we don’t want to create conflict with family or friends. No conflict, no problem.

A certain relative and I used to get after it around the dinner table often. Mostly, our topics included Iraq war, health care, gay marriage, environment, and, of course, taxes. You know, a little bit of everything. It maybe went something like this:

Him: “Every man for himself and the strongest survives! Why should I share my hard-earned money?”

Me: “Canada! Australia! United Kingdom! All of Europe for god’s sake!”

At the time, he was basking in the glow of a GW presidency. It was normal and possible to get in a heated discussion of just about anything and not ruin our relationship. But those fun and games are over now. There has been too much ugliness and tragedy. Too many conflicts are raging out there. The big lie over the election was outweighed by an insurrection, and now those lies are being resurrected. We, friends and family, can’t talk anymore about the state of our nation because no one really wants to defend Trump out loud.

No one wants to have to hear such a defense either. Let alone rehash the last four years. We’re just stuck now with his legacy of ugliness and hate. It does seem, however, that the name-calling has ceased. I know I did my share of hurting feelings at the beginning of 45’s residency. I was terrified of our imminent future. I foresaw hate—our gravest of poverties. You didn’t have to be telepathic to do so. Then, after a while, I shut up, having realized nothing could be done. The support would remain.

Mockery upon mockery of our shared welfare and only concern for his own.

Before the election, a person close to me wouldn’t comment when asked about Trump’s verbal attacks on women. “Grab ‘em by the pussy!” being the grandest of his gestures. How could anyone defend a man against that and explain it to my daughter, I wondered? He loves his family, he said, and did what was best for them—just taking the bad behavior with his idea of good policies (and judges).

The best was being told I would play the same tax tricks as Trump if I had the opportunity. That is to say, if I was rich enough, I could fudge the numbers. We’ve got plenty of privilege, thanks. Am I naïve to feel proud of our contribution to the wealth of our nation through taxes? Lots of heads are bobbing right now.

What is going to come of this division? Will the conversation always be about surface topics, like how busy our lives are and, ugh, virtual learning? Do we care only for the lives within our walls? Or am I missing something? Have we always been so self-interested? It’s really boring.

The word welfare has been perverted to such an extent it means one is unwell, unfit, and unable to take care of oneself: lacking personal responsibility. The poor get welfare, and people like me get wellness. Our only concerns should be the welfare, the safety, and the security of all people and the earth. It is so simple that we’re told it’s impossible.

But what do I know? I’m just a housewife. 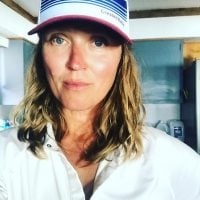 Thea McCarthy is a mother, lover, human. For the past year she’s been home with her daughter and husband. Before the pandemic she was busy with her little skincare busin… Read full bio