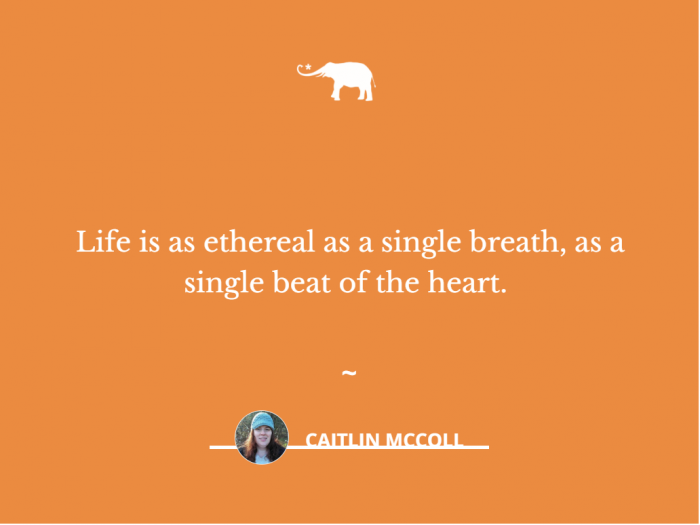 I was thinking I wouldn’t be writing another article on death so soon.

And yet, here I am…writing it as suddenly and unexpectedly as the news I just received.

I feel as if the rug has just been pulled out from underneath me. I just got a call from my dad—an actual phone call, which never happens. The first thought that I spoke out loud to my husband was, “Oh, my dad’s calling…that can’t be good.”

I could tell it was something bad when I could hear my dad getting upset on the other end of the phone as soon as I casually asked him, “What’s up?”

My spidey sense was right. My dad had called to tell me that my uncle, who lives in Ontario, passed away from a sudden heart attack last night. It happened instantly. I really felt for my aunt and for all their children who live in the United States.

My second thought was, “Now, all my mom’s family is gone.” He was the last one left and the eldest among his siblings. It was him, my mom, then my aunt.

My uncle Don was a great guy. He was big and loud—a really giant teddy bear with a long ponytail and a fan of Harley’s. He was always the life of the party whenever he was in a room. One of his passions was scuba diving, and he would occasionally leave the not-so-pleasant climate of Ontario’s winter to escape to tropical places and scuba dive in the life-filled oceans. He always had lots of great stories. I always enjoyed seeing him whenever he traveled out west to visit his parents and two sisters.

I’m sitting here, tears on my cheeks, and sniffling loudly while thinking about the fragility of life.

My dad said, “I guess we’re all getting to that stage of life when these things happen.” When my aunt passed away this past January from colon cancer at the age of 62, I wondered how my uncle felt, having lost both of his younger sisters in a handful of years, as well as both of his parents. It must have been a strange feeling to know that you’re the last one standing in your family—your immediate family. And now, it’s an all strange feeling for me to realize that there is no one left of the MacNeills.

I have a younger brother, so I assume that one day, he’ll be the last of us—the last of the Days, which is the name I used to carry before marrying my husband.

I am sure that it is a strange feeling to be orphaned as an adult. I am not there yet (and hopefully, I’ll never be with my brother being the youngest by two years). But it must be a surreal feeling to be the last one of the people who made you, who shaped you, and who influenced you as you grew up. That’s really what is hitting me the most right now. The fact that my mom’s family is no longer there. It’s a strange thing to contemplate and something I guess I’d never thought I would be thinking about—at least not at the age of 41.

Death is a surreal thing. You can be here one moment, living, breathing, existing, and then, the next minute, you’re no longer there. Life is as ethereal as a single breath—as a single beat of the heart. It is black and white. You’re here, and then you’re not. That may be why it’s so difficult for us to wrap our heads around it because it is so bizarre. It’s not as if one gradually dies (although sometimes, people can go through the process of dying gradually), it’s either you’re alive, or you’re not. There’s no in-between. And that’s hard and difficult to process: to go from one extreme to the other.

We human beings aren’t fans of change—at least not sudden changes like the end of life. We need time to come to terms with what’s happening. And even if we do along the way, as is the case with someone who has a long-term illness then ends up passing away, the finality of it is like a punch to the gut or a slap to the face. It wakes us up, shakes us up, and tears us up into a million different pieces—like confetti shot out of a cannon. And it’s hard. It’s so overwhelming, and there are too many tiny pieces to pick up that you don’t even know where to start.

At least that’s how I feel, anyway, following a loss. Like I’m trying to pick up the pieces and put them back together like how they were before. But we all know that that is impossible…

So how do we come to terms with it?

We take our time. We have patience with ourselves and our feelings of grief and loss. We don’t rush to sweep up those paper-fragile pieces of ourselves because if we do, we might lose bits in the process.

We have to be gentle, and, eventually, we will be able to gather them back up. They won’t be the same; they never can be. But we can put them back together again the best we could, in some semblance of normal, and move forward.