We Never Fought—& now he pays me Child Support.

“Can you call me please?”

The text popped through the peaceful looking screensaver depicting a lovely moment with my daughters, exactly the way it popped through my day—creating a cruel dichotomy between the buzzed and smiling faces at the winery and what I knew was waiting for me on the other side of the phone.

It wasn’t so much that I’d cancelled our plans to take a gig on a moment’s notice, it was that I didn’t call to discuss it with her. It was that I’d texted her and told her that was what I was doing without any input from her at all. It was also the third blow of the week. To be perfectly honest, things were beginning to look questionable for us.

The first two months of our relationship went by like a breeze—easy and fun. This week, however, was just one thing after another. What made it worse was that I just wasn’t used to fighting.

My last long-term relationship went on for six years, and in that time we managed to have two children and not one single fight. Not once had we ever raised our voices to one another. This was something I was once quite proud of.

“We never fought—and now he pays me child support.”

I will never forget the day I moved into my new apartment and began that journal entry. It was, psychologically, one of the most difficult days of my life. I don’t know if I can properly explain what it feels like to sit two-year-old and four-year-old girls down and explain that Daddy is going to be living somewhere else, but your imagination should suffice. It was brutal.

A couple of years ago in the online magazine, Oprah Daily, Stephanie L. King wrote, “Conflict in any meaningful relationship is inevitable…But instead of viewing arguing as a bad thing, experts agree relationship conflict can actually be healthy—an opportunity to learn more about your partner and how you can work together as a team.”

This made so much sense to me. When I looked at it from the converse side, the fact that my children’s mother and I never argued was our obvious downfall. We once thought that the fact that we both hated confrontation would be to our advantage, but really, how could two people who keep repressing their sadness, hurt, and disappointment think that their relationship would stand a chance?

And as Ms. King explained, perhaps I was used to the Red Sea parting when it came to me and the opportunity to play live music for money, but my new lover never got the memo, and, frankly, she wasn’t having it. It turned out to be an opportunity for us to learn about each other. Sure, it wasn’t terribly pleasant, but it was necessary.

At the same time, it’s just as important to keep in mind that fighting can only be constructive if it’s approached mindfully. Shouting any sentence that begins with, “You always…” or “You never…” is a fantastic example of precisely what you don’t want to do. In fact, making any statement that begins with “you” instead of “I” is less than mindful. 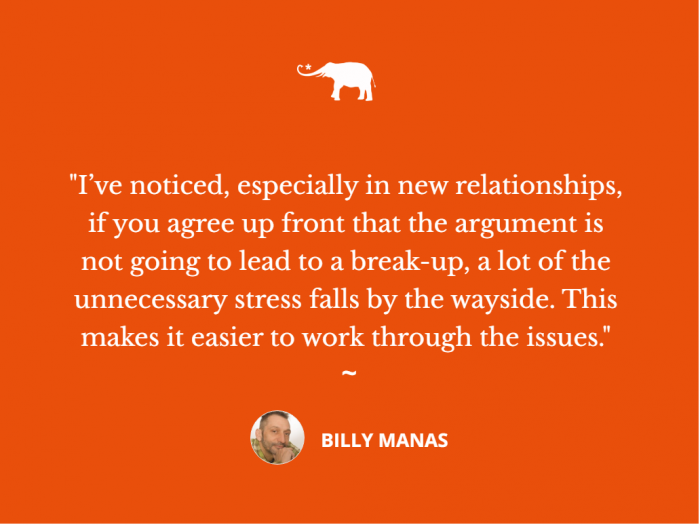 A few other things to remember when airing your grievances should be:

1. Focus more on listening and less on defending yourself. Most of the time, trying to parry a verbal blow with a canned defense leaves our partners thinking we are more concerned with “winning” an argument than actually listening to what they are upset about. Sometimes, the best defense is just to be quiet and listen.

2. Try to see things from your partner’s perspective as much as possible. Using my own last fight as an example, my initial reaction was that my partner was making a big thing out of something that wasn’t all that earth-shattering. We live a mile away from each other, I thought, it’s not like we’re not going to see each other the next day. None of that was really the point, though, and the sooner I was able to accept that, the faster we could resolve the problem.

3. Reassure your partner that you are not going anywhere. I’ve noticed, especially in new relationships, if you agree up front that the argument is not going to lead to a break-up, a lot of the unnecessary stress falls by the wayside. This makes it much easier to work through the issues.

4. Never be abusive. This should go without saying, but I am saying it anyway. This goes for verbal abuse and emotional abuse. Be present. Be mindful. Be loving. And then you won’t have to worry about being alone.

So the next time you find yourself bickering with your partner, don’t fret. Sex might be the nourishment every relationship needs, but fighting is the cardio that will keep your connection healthy and strong.