Why I Wish Relationships didn’t have to Grow.

It was the morning of my anniversary. I got up and carefully made ginger tea for two.

I was quiet throughout the house. I put the water in the pan and waited for it to boil while I grated the ginger. After a while I added the ginger, mixing its juices, splashing tiny minuscule bits all over the cooker; waiting, and hungry for the taste of tea leaves.

Next, I added the leaves to the concoction. The smell of ginger tea pervaded the kitchen. In went the milk. I let the smell spread further by boiling it for longer, to get all the flavours of ginger and tea to blend.

After pouring my satisfactory creation in two cups, I covered one with a lid and took my cup out into the balcony, remaining ever so quiet so I didn’t wake up anyone in the early hours of the morning.

This is my favourite part of the day—a new day, fresh air, and watching the morning hustle and bustle makes me feel happy.

I sat on my small, cane chair sipping my hot tea and looked up. Not so far away I could see two birds sitting on a telephone tower. They were also enjoying the morning together. I looked in the other direction and saw two couples flying together but they split up into two, each going their own way. I wondered where they were going—maybe to catch breakfast or to have a drink of water somewhere.

Growing, evolving, changing, adapting, adjusting, compromising, tolerating, complacency. All big words, and each with a a profound meaning that comes under the umbrella of the word “growing.” I had gotten used to these words and they were a part of my everyday dictionary. I am sure they are a part of most married couple’s daily lives.

A familiar noise distracted me from my thoughts so I got up to see the road sweeper on the road. I felt humbled. Whether it’s hot or cold, they are always there for us, keeping our roads clean. I thought of this quote:

It was as if the street sweeper heard of the mentioned quote because he swept meticulously, tirelessly, and relentlessly everyday.

Going back to my thoughts, I remembered my first anniversary. It had been a surprise two-day holiday in an old fort converted into a hotel. Those were the days when we used to have time for each other. Time to talk, discuss trivial matters, eat, drink, and laugh.

When there was no distraction of the mobile or social media to interrupt our days, we spent time conversing and debating various issues, which, I feel, is what brings people closer. When one spends time exposing their vulnerable side, one begins to feel and trust, hence a connection is made. This happens with all relationships, not just coupled relationships.

We didn’t have emoticons then, we had real emotions to show, face to face. We would talk and listen to the pitch of other people’s voices, lowering and increasing, depending upon the emotions they were going through. We could see and feel at the same time.

I was reminded of an occasion during college. I didn’t have any engineering knowledge regarding setting up a television in my college days. A girl I knew made fun of that and dissed me in front of some people. Later on, I was upset in the girls washroom and someone else I knew saw me. She informed my two good friends.

It was a windy and rainy evening, gale force-like winds. I was at home (halls of residence). Unexpectedly, my two friends, who lived far away, braved the foul weather and walked to my place to see me to find out if I was okay. I was really touched. I still remember it as if it was yesterday. Whilst I was embarrassed, they were great. They consoled me and told me to ignore the girl. That is friendship. The mobile was not in mass circulation at that time so they couldn’t message me or send me any emoticons.

The situation has changed now: nobody talks, they message. The pandemic has obviously made matters worse.

I sipped my flavoursome tea and looked up to the sky. I could see a couple of birds flying together but they went their separate ways. I wonder, why? What made them do that? Was it growth?

As a marriage ages, so do the people. No, sorry, people grow. Their thoughts and their points of views change too. Unintentionally, we do start taking each other for granted. In our heads, we start sharing roles and responsibilities, creating boundaries, space and “me time,” only to find out that it’s too late to go back to being the couple that we once were. The couple status remains merely for others to see. For the concerned couple, it’s not a relationship that they are in, it’s just a comfort zone, a feeling of togetherness but apart.

Some find it a phase in life and hope things will return to their normal self. Whilst most find they don’t want to return to the old days where they had to spend time, talk, and feel emotions. That was then, in the younger years. Now, they have real jobs, deadlines to meet, important decisions to be made, targets to meet, meetings to be arranged, and a family to take care of. It’s all part of growing in a relationship.

It was getting warmer outside. I looked in through the window and still no sign of anybody waking up. I sat down to finish my tea, alone. At a distance, I could see the train going past and hear its hum as it rocked away. I had grown to love the peaceful noise of a train rocking away. It reminded me of something about my childhood.

I heard a gush of water from inside the kitchen. I looked through the netted window and I called for my daughter.

I told him that his ginger tea was in the cup.

And I went inside. 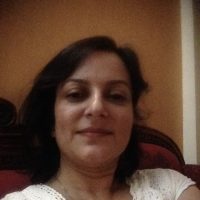 Smriti Sinha loves writing and finds that she can express herself easily when she writes. She hopes she can do justice to herself whilst influencing some of your lives a littl… Read full bio