What it truly means to Step out of the “Man Box” and Accept our Vulnerability. 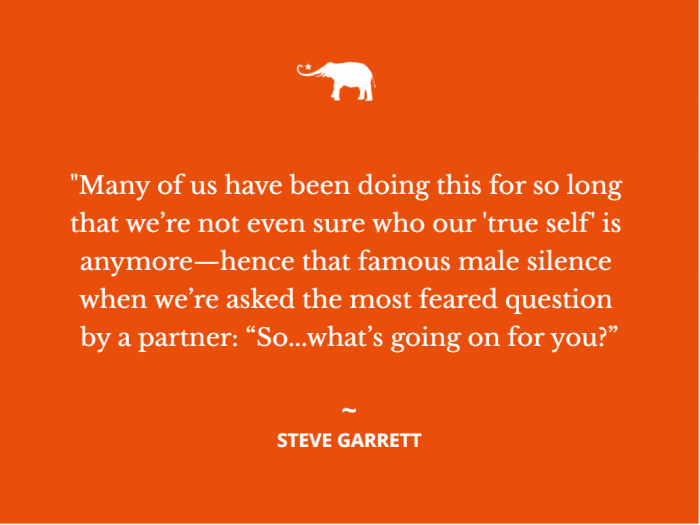 One of the strangest aspects of being a “hu-man” is that although I’m usually pretty aware of my feelings and emotions, I sometimes hide them from myself and often without realising it—probably because of guilt or shame.

But it’s a certainty that they’ll come out sooner or later, especially when they’re triggered by something my partner says. This can cause a blast of anger that leaves both of us wondering what’s happened—until I dig in to find out where it came from.

I’ve discovered that my anger is often rooted in either fear or sadness. It’s a response to feeling disempowered in a way that echoes how I felt sometimes as a kid—which back then would have probably resulted in either sulking or having a temper tantrum.

Once I identified the cause of my defensive outburst, I shared it with my partner. This had the double benefit of helping her get to know me better, and it also took the sting out of any buried, painful feelings, and put them into perspective, by bringing them out into the light.

A recent example is how I’ve been feeling about the fact that, at the moment, my partner is working, and I’m not.

I thought I’d managed to convince myself that, as a “modern man,” I wasn’t hung up on any obsolete stereotypes of being the breadwinner and earning more, and that in any case, it was only a temporary situation. I was evolved enough to be happy as a househusband for a while.

But who was I trying to kid? Underneath the ideal person that I liked to think I was, I felt quite insecure about the fact that I wasn’t “working” and ashamed that she was being the provider. So that when she asked me a simple question about emptying the washing machine, I responded with a very snappy tone to inform her that I didn’t need her to tell me what housework needed to be done, and that if she loved me, she would trust me to be on top of it all.

With hindsight, I can see that all this was completely out of proportion to her reminder, which was completely reasonable, bearing in mind that I’d forgotten to empty it for the past couple of days, and the thing was starting to stink.

Fortunately, she left me time and space to cool down and reflect on what had happened. She gave me time so I could come back to her and explain the ambivalent feelings that I was struggling with, apologise for my disproportionate reaction, and most importantly explain what I planned to do about it.

That involved getting my arse in gear to apply for a couple of jobs, facing up to my lingering gender assumptions about who does what in the house, and realising it was time for me to “man down,” grow up, and get on with doing my fair share.

It also reminded me that those kinds of conflicted feelings may be going on invisibly inside other men, when there’s an inner conflict between how they think or they’d like to feel and what’s actually coming up.

No matter how cool, calm, and collected someone may seem on the surface, there will be some kind of turmoil or denial going on inside. The inner worlds of other people are mostly invisible to me, until I get to know them pretty well.

Most of the time, I’m relating to and interacting with a version I’ve created of someone that may bear little if any resemblance to who they really are. This is especially true with us men, who can be such masters of concealing our true feelings and trying to project the image of who we think we “should” be, rather than connecting with and sharing our true selves.

Many of us have been doing this for so long that we’re not even sure who our “true self” is anymore—hence that famous male silence when we’re asked the most feared question by a partner: “So…what’s going on for you?”

One tragic result of this inner disconnection we have from our deeper feelings—especially from any part of ourselves that we think might seem “weak,” even though these are feelings like kindness and compassion—is that that suicide is the leading cause of death in the United Kingdom. for men aged between 20 and 50.

Denying those feelings in ourselves leaves us as hollow beings, who struggle harder every day to find some kind of deeper meaning in life.

I have spent many years in that dark place where I was so insecure about my identity as a man that I hid every kind of “soft” feelings from everyone and self-medicated away my depression with whatever I could get my hands on.

When I finally broke down in tears in front of my girlfriend then braced myself for her to beat a fast retreat, I was astonished that she seemed to be looking at me with a mixture of caring and admiration.

She then shocked me even more by saying that she admired my courage for daring to share my vulnerable feelings, and that in fact, it turned her on!

Once I had gotten over the mixture of shock and relief, I wanted to tell every man I know the unbelievable truth: (some) women think their man being comfortable enough to cry is sexy!

But not for too long, or too often, of course.