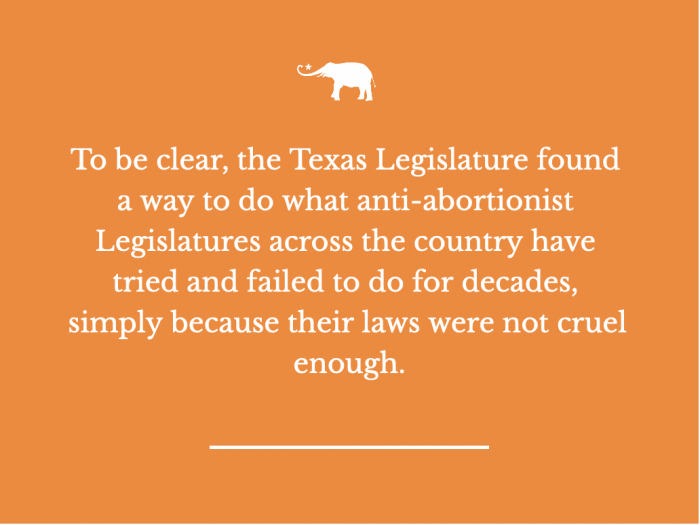 I did not sleep well last night.

Yesterday, September 1, 2021—10 days before the 20th anniversary of 9/11—the male-dominated, Republican-controlled Legislature and Governor of the state of Texas flew SB8 into the tenuous citadel of women’s reproductive rights in Texas and burned it to the ground.

As of yesterday, women in Texas who are determined to be more than six-weeks pregnant no longer have protection within that citadel. It is gone.

Worse, any woman who considers having an abortion in the state of Texas paints a target on those she loves and anyone else around her who wants to be supportive or help in any way. Because of what she is considering, they become potential targets for frivolous, expensive lawsuits by anyone, anywhere in the United States, who have nothing to loose and a bounty to gain. This is not limited to one frivolous lawsuit per target but is an unlimited number.

So, while she may not be the target of such action, she may stand alone among the carpet-bombed wreckage of the lives of her friends, loved ones, or any other innocent bystander with compassion.

To be clear, the Texas Legislature found a way to do what anti-abortionist legislatures across the country have tried and failed to do for decades, simply because their laws were not cruel enough.

I was taught by school and family that the U.S. Supreme Court was the last best hope of citizens against unfair and unjust—and even cruel—laws and actions of others. I saw it as the final bulwark of justice. And yet, at midnight on September 1, 2021, the Supreme Court of the United States turned their backs on the plight of women in Texas. They took a vote and, five to four, they elected to walk away and let SB8 land in that citadel. And thus, my hope and trust in that institution to protect the citizens of the country from injustice and evil finally died that night. 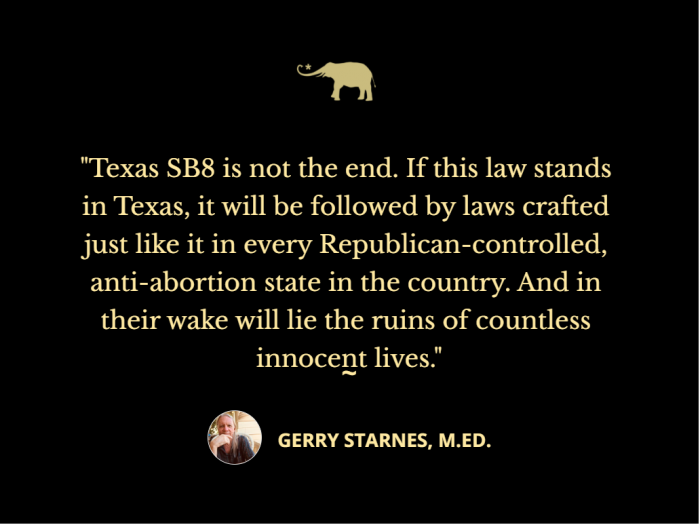 Could the four dissenting justices have done more? I do not know. The inner workings of the court are intentionally opaque and inscrutable. Should they have done more? In my view, undoubtedly and absolutely. They should have torn down the walls rather than take an urbane, if possibly contentious, procedural vote to stay such an important and egregious law. By not doing so, they allowed the SB8 missile to hit its intended target and burn down that citadel of women’s personal sovereignty and choice in Texas without exception.

I imagine the four justices to be looking out the window of their ivory tower in Washington, D.C., while the five return to their beds. I imagine them seeing the mushroom cloud of flaming horror rise over the horizon. I wonder if they wish they had done more to stop that from happening. I wonder if they slept last night.

It is early morning, September 2, nine days from the 20th anniversary of 9/11/01, a singular event that shook the world awake for a while. I wonder if 9/1/21 will similarly shake the country awake. Texas SB8 is not the end. If this law stands in Texas, it will be followed by laws crafted just like it in every Republican-controlled, anti-abortion state in the country. And in their wake will lie the ruins of countless innocent lives.

With the passage and implementation of that one heartless and evil law, the Governor of Texas and the Republican-controlled Legislature have potentially destroyed the lives of women and those they love across the state.

I wonder, how do they sleep? 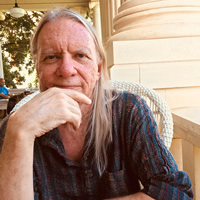