Billie Eilish debuts at the Met Gala in a Marilyn Monroe-inspired Gown—but sets a Unique Condition. 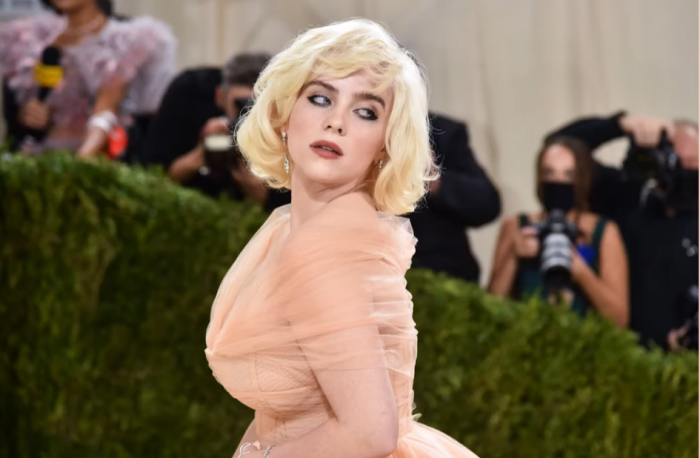 Billie Eilish is one of the most iconic singer-songwriters of our time.

Billie Eilish is a fashion icon with quirky fashion sensibilities.

Billie Eilish is a lot of things.

Billie Eilish speaks up for animals.

Billie Eilish is a changemaker.

Billie Eilish is only 19.

“Once you know that kind of thing and you see it, it’s really hard to go back.” ~ Billie Eilish

Many celebrities turn to a plant-based “diet,” often called vegan diet, for various reasons—health, “be in,” “do the cool thing,” “for the partner.” And they often don’t stick to it.

Now that that’s cleared, let’s continue with the celebrities. Though few, there are those for whom vegan is not a diet choice, it is their commitment to reducing suffering—for all beings, human and nonhuman animals.

Among the most notable (and my only celebrity crush ever) is Joaquin Phoenix who uses his platform, his celebrity status to share the message of compassion every opportunity he gets, including in his speech at the Oscars. A vegan since he was three years old, Phoenix is not just a vegan, but an animal rights activist too.

Billie Eilish is another one who is not flaunting her vegan status as a publicity tool, rather using her publicity reach to promote veganism. A lot of people, regular and celebrities alike, live a cruelty-free life themselves but do not actively promote it.

She has often shared footage of animal cruelty in the dairy and meat industries on her social media, notably after she saw footage of an extensive undercover investigation into Fair Oaks Farms, the largest dairy in the United States.

“I keep my mouth shut most of the time about this because I believe everyone should do eat and say whatever they want…and I don’t feel the need to shove what I believe in, in anyone’s face.

“but man…if you can watch the videos that I just posted and not give a f*ck that it’s YOU contributing by LITERALLY EATING the creatures that are being fully tortured just for your pleasure, I feel sorry for you.

“I understand that meat tastes good..and I know you think you’re just one person and it ‘won’t change anything if you stop’
but that’s ignorant and stupid.

“if you have half a brain, you should know ‘one person’ adds up.

But what has all this got to do with the Billie Eilish dress at the Met Gala?

This teenager, known for her oversize and monochromatic pants-and-jacket sets by Gucci, Burberry, and Chanel, occasionally matching her clothes to her black-and-neon-green hair, has evolved into her new avatar—that of a glamourous, sensual, diva.

Oscar de la Renta’s designers spoke with The New York Times about dressing Billie Eilish in a “risky” ball gown for the #MetGala — and her condition that the brand stop using fur. https://t.co/rTGVWkd7Jd pic.twitter.com/5uv7SdC5yJ

Walking out in the Marilyn Monroe-inspired ball gown with corseted waist and a cascading train, she used the high-profile Met Gala event to elicit an animal rights policy and facilitate a permanent change at the designer label, Oscar de la Renta, saving many animals from the torturous fate that awaits them in the making of fur.

Billie Eilish’s offer to wear an Oscar de la Renta gown at the Met Gala came with a condition—that they will permanently end the sale of fur completely.

While the designer label has ditched fur from its red carpet designs in recent years, fur was still being sold in stores, making up a meaningful amount of sales and profit, the label said. Eilish stepped in and onto the red carpet—and that all changed. Oscar de la Renta will terminate all fur sales at the urging of Eilish.

Eilish said in a statement to The New York Times that she found it “shocking that wearing fur isn’t completely outlawed at this point in 2021,” and “I’m honored to have been a catalyst and to have been heard on this matter.”

Celebrities who command a following of this magnitude not only have the opportunity but also the responsibility to use their platform for affecting meaningful social changes. Billie Eilish understands this already and has been advocating for a more compassionate society since her early teens. Kudos to her!

Pisces Full Moon: Relinquishing Attachments to Chaos & Surrendering to the Heart. {September 20th} 5 Tips for Making the Vegan Transition & Recipes to Get you Started. This Anthony Bourdain Quote will make you Question the Meaning of Success.
See relevant Elephant Video