I was 12.5 Weeks when I Terminated my Pregnancy: Texas, 6 Weeks isn’t Enough Time.

I was 12.5 weeks when I terminated my pregnancy.

And no, it wasn’t my “choice” to wait that long.

It took the clinic over a month to create an opening for my surgery, weeks for me to save up enough money to go through with it, and thousands of hours to process exactly what the f*ck was going on in my pregnant 20-year-old mind, body, and heart.

Let’s play this timeline out for a second, shall we?

>> Week 1: You’re on the pill and have unprotected sex for the very first time with him—something you’ve anticipated for five years. Little do you know, you’re life is about to completely change.

>> Week 3: You take a pregnancy test. It’s positive. You take six more just to be sure. It’s smack dab in the middle of finals, and you’re trying to figure out how to deal with being pregnant while studying for your chemistry test. You’re on financial aid and broke because, well, #globalpandemic.

>> Week 4: You suffer in silence for days. Crying deeply. To the core. It’s that rattle-your-bones type of cry. Too afraid, ashamed, and scared to tell anyone, you suffer in silence. The courage inside you to sit your roommate down and share the news is small, but you somehow find the words.

>> Week 5: You drive 1.5 hours with all six pregnancy tests sitting on your passenger seat to break the news to the father-to-be. You cry. He’s at a loss for words. He tells you the decision is yours, and when you tell him you’re aborting, he tries to hide the exhale of relief.

>> Week 6: You book the appointment with Planned Parenthood. Their first available visit for the procedure is five and a half weeks away.

>> Week 7-12.5: You start saving your babysitting money to ironically terminate your pregnancy while continuing to go to school and try to make ends meet.

>> Week 12.5: You go to the clinic with your best friend. Entering the building alone, you go through with it. You leave the clinic and make eye contact with a handful of the angry women holding their “baby killer” signs as you drive away from the experience, leaving it all behind.

Then, it’s over. Now it’s on with your life post-abortion.

There’s no support group set up from the clinic. No trauma classes from the medical system. Nothing but you and your unequipped tools to try to process the next 10 years of this.

I’m not writing these words to get into an internet war with anyone about “my body, my choice.” Or bash on the women who passionately stand at the entrance and exit of the clinic with their signs and rage because, quite honestly, everyone is entitled to say and shout whatever they want (the First Amendment says so).

I’m here to speak up and say six weeks isn’t enough time. Not with the way our broken system is set up.

Six weeks isn’t enough time to go through the pain, shock, and trauma of something as monumental as an abortion.

Six weeks isn’t enough time for a teenager to process being raped and having to abort her baby.

Six weeks isn’t enough time for a single mom to come up with the money to terminate her pregnancy with her abusive ex, who strolls in at 3 a.m. and forces her to f*ck.

Six weeks isn’t enough time for a pre-menopausal woman suffering from terminal cancer to go through with the hard truth that she has to have one.

The medical system says it takes six weeks to heal a single broken bone. How the f*ck can we justify using that same time frame to terminate a pregnancy?

Making it illegal to have an abortion after six weeks will create catastrophic outcomes for women all over our country.

Every woman in America should be filled with rage for this ridiculous setback in our country. This isn’t about if you’re pro-choice or not. This is about supporting every single woman to make her choice and decide what’s right for her life and what she needs to do to move through whatever she’s going through.

And we as women cannot be silent about this. I’m not asking you to come out with your story or share it publically; that’s your choice. But I’m asking you to do something (anything) to raise awareness of what’s going on. 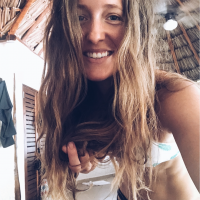 Jenny Neal is a sales copywriter by day and Goddess Gathering Yoga Teacher by night. She believes she’s on this planet for one reason only—to spread love. And she’ll do … Read full bio