Personality Disorder, Depression, or Tormented by Ghosts of my own Creation?

Being haunted is exhausting.

Everywhere you turn there is a battle to be fought.

I started to fight with my mental health when I was a teenager but didn’t see a therapist until my late 20s, while in a manic state of confusion.

On my first visit, I laid it all out as quickly and desperately as I could, hoping to be cured in one session. I was told I was bipolar. I’m not sure who gave me the prescription, but I took the pills for a month then stopped, and I never went back.

My next therapist was a man who asked if I’ve ever had sex with a woman. This question was asked on my third visit, which became my last, as I realized his question had nothing to do with me.

After that session, I lived and died another thousand lifetimes.

I was 35 when my general practitioner and I discussed some symptoms I was experiencing and he suggested that I was dealing with seasonal affective disorder (SAD) and prescribed Wellbutrin.

I am 100 percent positive that this medication pulled me from the depths of darkness and despair. It helped me to begin putting some of myself together in an attempt to build a foundation that I could stand on. I had never had that or anything solid underfoot. Everything had always been grabbed and placed in a frantic desperate emergency, like a life support attempt. All just flimsy bandaids that couldn’t sustain the blows life was throwing at me.

Family and random people gave me different diagnoses for my flailing in life. Maybe manic depressive, schizophrenic, or borderline personality disorder, they would suggest—but mostly just plain crazy and broken.

Eventually, just over 13 years ago, I found a therapist who most certainly was the catalyst in my fight to understand.

All I have ever wanted to do was understand why I was the way I was. I have always felt the need to know the reasons why I felt so confused and shattered, why I only had memory bursts of sheer terror from childhood and no remembrance of joy. I believed if I knew what caused it, I could figure out how to fix myself, and how to live a life of less pain, with less desperation.

The ghosts that haunted me would come from nowhere, until I dug deeper into a memory and found they were placed there by someone else. In my early years, other people created my horror stories, adding in characters who played the roles that tormented me in my wake and sleep. I’ve learned that I don’t have to play the parts that others chose for me, nor do I have to entertain their roles.

It has now been three years since I stopped taking Wellbutrin at the start of each fall to keep me out of the darkness.

I’m so grateful that it was made available to me when it was and that I had the insurance to afford its high price. I came from a poor place, but I know that I was and that I am privileged to be able to afford therapy and the medication that helped me while I battled the dark.

It’s difficult sometimes to live this life we are given.

I’ve learned what tools work for me and keep me from going back, and I have a strong spiritual practice that I am devoted to. I’ve learned to use my breath, and I now meditate every day. I practice reiki each morning without fail and that is where I ground myself and begin my day.

What works for me may not work for others, but I believe we all need to find something that works for us—and do it.

I also know that if we start “here” and with that I mean our own “here,” our self, our being, then pull our focus inward and listen, we will be pointed in the right direction—because it will be coming from within us. Only “you” know “you.”

It will be hard and uncomfortable. The pain will be deep at times, but I implore you to listen to your intuition. Seek the help that you need, and build a toolbox so that you can create a solid foundation. Of course, it will shake as it’s tested by life and its lessons. There will still be ghosts that attempt to drag us back, and there will be times when we will be hanging on by a few fingers, but something will click, and we will remember who we are. We’ll lift ourselves back up, brush it all off, and continue this journey of life.

I don’t want to live a desperate fearful life. I will keep waking up and slaying the ghosts that hide in my darkness, and I will continue solidifying the foundation I stand on.

I believe I am meant to be exactly where I am at this very moment. I am breathing into it and I am not afraid. Because I know what it took for me to get here and I am here.

No being should be left in the dark. I pray for those in need that they are met and given the tools and support they need to step out of the darkness. I pray that the hopeless find hope, that the light reaches them, and they find a way to get up and get out of their darkness and slay their own ghosts that keep them imprisoned. 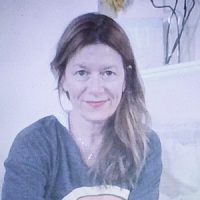 Dianna Henrickson  is discovering she has dissociated since she was a toddler. She is a PTSD survivor and warrior. She is finding her breath and Voice through therapy and he… Read full bio